Looking back a decade ago, many companies were just learning about the World Wide Web and discovering their ability to reach customers using HTML-based content. Back then, most companies maintained a single public-facing Web site. That’s all they needed for the purposes of advertising their products and services.

Times certainly have changed since then. Today companies are using Web sites not just to reach customers, but also to provide applications for vendors, employees, and top-level management. It’s not uncommon for a large company to create hundreds or even thousands of Web sites. For example, a large corporation could require a new Web site to be created for each new marketing campaign or each new employee.

In a world without SharePoint products and technologies, it can be expensive and time consuming for a company to keep up with its need to continually create and manage Web sites. For example, let’s walk through what is required to create a Web site designed to track sales leads and customers.

First, the process requires a database administrator to create a new database and the required tables in SQL Server or some other DBMS system to track sales data. Next, a developer must create an ASP.NET Web site with Web pages and the required code to view and edit the sales data. Once the ASP.NET Web site is ready for deployment, a system administrator must then copy the ASP.NET application files to the target Web server and configure Internet Information Services 6.0 (IIS) to create a new virtual directory. If the ASP.NET application is to be deployed in a Web farm environment, the requirements increase because these administrative procedures must be duplicated across each front-end Web server in the farm.

As you can imagine, using this approach to get a new Web site up and running usually takes weeks, or sometimes even months, because of the need to coordinate efforts between a database administrator, a Web developer, and a system administrator. WSS was designed from the ground up to make the creation of Web sites faster and more cost effective. As a WSS developer, you will learn to develop components that others will use to create sites and workspaces.

At its core, WSS is a site provisioning engine. The architecture of WSS was specifically designed to operate in a Web farm environment. The act of provisioning (a fancy word for creating) a site in WSS can be accomplished by any member of the IT department in less than a minute by filling in the required information in a browser-based form and clicking the OK button. There’s no need for a database administrator to create a new database or any new tables. There’s no need for an ASP.NET developer to create a new ASP.NET Web site. There’s no need for a system administrator to copy any files or configure any IIS settings on the front-end Web server.

The WSS site provisioning engine is based on an integrated storage model that involves multiple SQL Server databases to store content and configuration data. When you install WSS, you can elect to use SQL Server 2005 or SQL Server 2000. For simple deployments and development scenarios, you can also use SQL Express, which eliminates the need to purchase a licensed copy of SQL Server.

It is important that you know the difference between Windows SharePoint Services (WSS) and Microsoft Office SharePoint Server 2007 (MOSS). While WSS and MOSS are both pieces of software built by the Microsoft Office team, WSS is included as a part of the Windows Server 2003 operating system while MOSS is a separate product with its own SKU. You should think of WSS as the underlying platform and think of MOSS as a value-added set of components and services that has been built on top of this platform.

WSS does not have its own licensing model. Instead, the use of WSS is controlled through Windows Server 2003 licenses. This makes it very cost effective for companies to roll out applications that have been designed and built on top of the WSS platform. MOSS, on the other hand, has its own licensing model that includes server-side licenses and client access licenses (CALs). The MOSS licensing model is further broken out into a Standard Edition and an Enterprise Edition.

Every deployment of WSS is based on the concept of a farm. Simply stated, a farm is a set of one or more server computers working together to provide WSS functionality to clients. In the simplest deployment scenario, a WSS farm consists of a single server computer that acts as both the front-end Web server and the SQL Server database server. A more complicated WSS farm would consist of several front-end Web server computers and a dedicated database server, as shown in Figure 1-1. 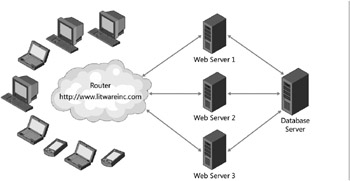 An important characteristic of an IIS Web site is that its security settings are configured independently of other IIS Web sites. For example, you can configure the Default Web Site as a public-facing site that might involve using Basic Authentication and allowing anonymous access. You can create a second IIS Web site intended for use within the corporate LAN on a different port such as port 1000. Once you have created this intranet Web site in IIS, you can configure it to require integrated Windows authentication and to disallow anonymous access.

An IIS Web site must be specially configured when it is used to serve up WSS sites. We are going to defer discussing the technical details of this configuration until the next chapter. At this point, we want to introduce some important concepts and terminology. 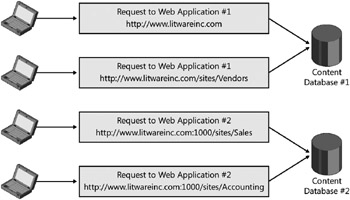 Let’s take a step back and ask a fundamental question-what is a WSS site? First, a WSS site is a storage container for content. Site content is primarily stored in the form of lists, document libraries, and child sites. Second, a site is a securable entity whose content is accessible to a configurable set of users. A site can either define its own set of users, or it can inherit the users of its parent site. A site also contains a configurable set of groups and permissions that define the level of accessibility that various users have on the site’s lists and document libraries.

Note that WSS doesn’t actually perform user authentication. Instead, WSS relies on the underlying layers within IIS and the ASP.NET authentication provider infrastructure to accomplish that. However, WSS does take charge when it comes to authorization. WSS provides user interface elements and supporting code that allows privileged users to configure authorization to various elements within their sites. WSS 3.0 also introduces valuable security trimming features so that commands and links to site elements are only shown to users who are authorized to access them. 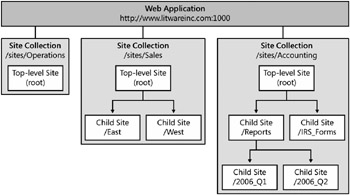 When a company first begins using WSS or MOSS, one of the first questions that comes up is how to partition sites across site collections. For example, should you create one big site collection with lots of child sites, or should you create many individual site collections? These decisions are usually best made after thinking through all the relevant issues discussed in the next few paragraphs. You must gain an understanding of how partitioning sites into site collections affects the scope of administrative privileges, security boundaries, backup and restore operations, and site design.

Think about the requirements of site management in a large corporation that’s provisioning thousands of sites per year. The administrative burden posed by all these sites is going to be more than most IT departments can deal with in a timely manner. The concept of the site collection is important because it allows an IT department to hand off the administrative burden to the business divisions that own the sites.

They can also add child sites below the top-level site. This allows them to grow the hierarchy of child sites and configure security for these child sites any way they see fit.

For example, the names of classes in the WSS object model are based on the old STS terms. As a result, you program against a site collection using an SPSite object, and you program against a site using a SPWeb object. An SPSite object provides a public property named RootWeb that returns an SPWeb object representing the site site. Once you understand this potential point of confusion, getting up to speed on various aspects of WSS becomes less confusing.

WSS ships with a handy command-line utility named STSADM.EXE. This utility allows you to run interactive commands from the Windows command line and to script batch files that accomplish administrative tasks such as creating, backing up, and restoring site collections. When you run this utility from the command line or from a batch file, you must pass the –o parameter followed by one of the supported operations. Here’s an example of a command line instruction to create a new site collection at a specific URL.

Keep in mind that the installation of WSS adds the STSADM.EXE utility to a WSS system directory deep within the Windows Program Files directory. If you want to be able to call this utility directly from the command line on your development workstation, you should add the following path to your configured System path.

When you write a batch file, you should also assume that it might be run on a machine that does not have the proper System path configured. Therefore, you should write batch files that explicitly specify the location of the STSADM.EXE utility.

Once again, the line breaks in the preceding example are only for readability. You will want to remove them when writing an actual batch file.

A final motivation for you to start thinking in terms of site collections is that they provide a scope for many types of site elements and custom queries. For example, the WSS object model provides the means for you to run queries that span all the lists within a site collection. However, this convenient query mechanism does not span across site collections. Therefore, if your application design calls for running queries to aggregate list data from several different sites, you have an added motivation to design these sites as child sites within the same site collection.

Users can also create several types of custom site elements for reuse across all the sites within a site collection. For example, if you create a site column within a top-level site, then this site column is reusable in all the child sites down below. This allows you to define the column characteristics such as formatting, validation, or a choice list one time and then to use this reusable column type across many lists within the site collection. Later, you can update the site column and have this update affect all the lists when the site column is used. Site columns are new to WSS 3.0 and are discussed more fully in Chapter 6, “Lists and Content Types.”

You cannot really appreciate the simplicity of WSS until you have provisioned your first site collection. We are now going to walk you through the steps of doing exactly that. You will play the role of a SharePoint farm administrator. Therefore, you will need the proper permissions. 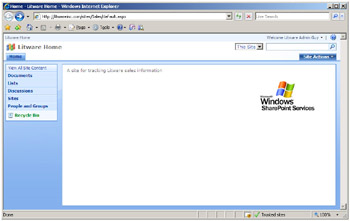