Before going into greater detail about the helper classes for the upcoming projects in this book, this section talks a little bit about unit testing. You already learned about static unit tests in the last chapter. Static unit tests are great for quickly checking visual results, testing physics and the controllers, and building your game in a quick manner. But helper classes and components that do not require user input would require you to think about interfacing with them. That makes no sense because unit testing is all about improving the maintainability of your application and making sure everything runs as errorless as possible. For example, to test if the Log class works you could call the following lines of code:

Now you could go into the application directory and check if the log file exists and has an entry with the “New log entry” text in it. But checking this file yourself over and over again is a bit of a hassle. Instead of logging every error here you should only put the less important warning messages (e.g. user is not connected to the internet) into the log and throw exceptions when fatal errors occur (e.g. texture not found, no shaders available, etc.). This is especially true if the problems become bigger and the tests are much more complex and involve a very lengthy check process. You can avoid checking for errors yourself by letting these tests check themselves and let them be executed automatically instead of calling them yourself from the Program class like static unit tests.

To do this you can use the popular NUnit Framework, which you can download at http://www.nunit.org/.

Alternatively you can also use TestDriven.NET from http://www.testdriven.net/ if you are using Visual Studio 2005 Professional or better. It supports many cool features and you can start tests directly with hotkeys or the popup menu, which is really cool and simple. TestDriven.Net does not work in VC# Express or XNA Studio Express (it did work a year ago, but the developer had to remove the plugin support for Express because Microsoft wants developers to use the Professional Edition for serious programmers). See Chapter 1 on how to get XNA working in Visual Studio 2005; use a dummy project from XNA Studio Express for processing your content, which is not possible in Visual Studio 2005.

It does not matter which one you install, just add the NUnit.Framework.dll from the installation folder to your project (right-click your project references and add a new reference; use Browse if you can’t find it in the Global Assembly Cache (GAC), which is represented in the first tab). Now you can add the following using directive:

I usually add this at the very top of the using directives region and the reason why this is used only in debug mode is the fact that you will only use the unit tests in your debug build; for the final game you don’t want the extra NUnit.Framework.dll and all the testing code, because it is not required for your game.

As an example, take a look at the first unit test in the StringHelper class, which checks if the IsInList helper method works as expected:

Assert is a helper class inside the NUnit framework and it contains methods to check if the return values are as expected. If the value is not as expected an exception will be thrown and you can immediately see which line of your test failed. For example, Assert.IsTrue checks if the return value of IsInList is true. If the return value is false, an exception will be thrown. Luckily the string list contains “whats” and the test should pass. The next test checks for “no way” and that string is not in the second string list and therefore the second test line should return false as it does. Note: “there is no way!” contains “no way,” but you were not checking the Contains method, which also exists in the StringHelper class. IsInList only returns true if the exact string was found in the list.

The test will execute without any error, but if you were to change the test by changing “whats” to “whats up” the first Assert test would fail and you would see the following results from TestDriven.Net:

This tells you exactly where to look (you can even double-click the error and jump to the line 1387) and what you should change. The error becomes even more visible if using the NUnit GUI (see Figure 3-7). 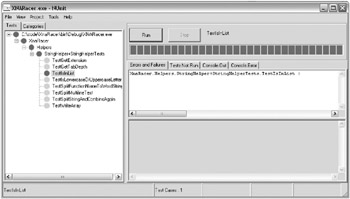 The NUnit GUI is a good tool to run many unit tests at once and quickly see which ones did not work properly and then investigate further in the source code. You can use File

Load to select your program or just drag and drop any .NET .exe or .dll file onto the NUnit GUI program. Then you see all the tests in that assembly and can test them by clicking Run. The program is nice, but I usually don’t go outside of my programming environment when coding and testing, and therefore I like TestDriven.Net a lot more and use it all the time. To fix the error you just change the “whats up” line back to “whats” and all your tests will pass and you get a green light.

I did not go much into writing unit tests here because Chapter 2 already discussed the basic rules, which of course also apply for dynamic unit tests. Keep these guidelines in mind when you start writing your first unit tests: