Certainly the essence of learning is discovering new ideas. Too often in our hurried search for efficiency, we forget how to generate and savor the ideas that our organizations need. Creativity literature is full of suggestions on ideation that urge us to rearrange, recombine, restate , restructure, synthesize, simplify, question, and change our thoughts to increase the power of our ideas.

Dr. Karl Albrecht , author of this activity, takes the elaboration function of creative thinking one step further to "protecting ideas". His "P.I.N." formula can be part of an organization's defense against what he calls "collective stupidity". Dr. Karl is considered one of the pioneers of the concept of Organizational Intelligence, which he defines as "the capacity of an enterprise to mobilize all of its brain power, and to focus that brain power on achieving its mission". His "P.I.N". formula speeds this mobilization !

This activity helps trainees learn to suspend judgment, appreciate the potential of new ideas, refrain from killing the ideas of others (as well as their own), and show their colleagues and team members how to do so, using a simple three-step formula.

One flipchart with paper and markers for each team (for example, if you have 5 teams you'll need 5 flipcharts; 12 teams , 12 flipcharts)

Room is set up for teams to work at flipcharts, one flipchart per team. Each team works at its own easel. 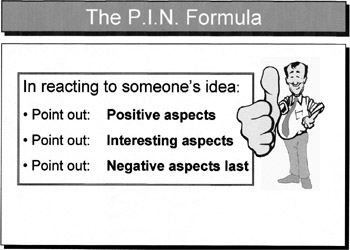 DR. KARL ALBRECHT is a management consultant, futurist, speaker, and author of more than 20 books on various aspects of personal and organizational effectiveness. He is recognized as a leading authority on the development of practical intelligence. Karl's book B rain P ower (Prentice-Hall, 1980), a best-seller on creative thinking, was the basis for a popular training film of the same title, starring actor John Houseman. He also wrote P ersonal P ower (Prentice-Hall, 1981), a guide to self-esteem and interpersonal skills, as well as B rain B uilding (Prentice-Hall, 1982), a primer on improving one's logical thinking skills. His book S ervice A merica in the N ew E conomy , coauthored with Ron Zemke (McGraw-Hill, 2002), is an update of their earlier book (1985) with a similar title that sold a half million copies in seven languages. He has also written O rganization D evelopment : A S ystems A pproach (Prentice-Hall, 1983), T he N orthbound T rain : F inding the P urpose , S etting the D irection , S haping the D estiny of Y our O rganization (AMACOM, 1994), C orporate R adar : T racking the F orces T hat A re S haping Y our B usiness (AMACOM, 1996), and T he P ower of M inds at W ork : O rganizational I ntelligence in A ction (AMACOM, 2002).

Karl Albrecht created the AMA seminar 2538, The Brain Power Course: Learn to Develop Your Thinking Skills, and licensed it to AMA. His four-style Mindex Thinking Style Profile is featured in several AMA seminars and is used throughout the world for self-assessment, executive team building, and communication training.

The AMA Guide to Management Development