You've configured a printer so that you and the other users on your computer can print to it. Now you want to share that printer with other people in your home, school, or office. Basically, that means configuring that printer as a print server.

The printers that are configured on your Linux system can be shared in different ways with other computers on your network. Not only can your computer act as a Linux print server (CUPS or LPRng), it can also look to client computers like an SMB print server. After a local printer is attached to your Fedora Linux system, and your computer is connected to your local network, you can use the procedures in this section to share it with client computers using a Linux (UNIX), or SMB interface.

After a local printer is added to your Fedora Linux computer, making it available to other computers on your network is fairly easy. If a TCP/IP network connection exists among the computers sharing the printer, you can simply grant permission to individual hosts or users from remote hosts to access your computer’s printing service. The procedures for setting up local printers are discussed earlier in this chapter.

To share a local printer as a print server to other computers on your network, do the following:

At this point, you can configure other computers to use your printer. If you try to print from another computer and it doesn’t work, here are a few things to try:

Access changes to your shared printer are made in the /etc/cups/cupsd.conf file.

Your Fedora Linux printers can be configured as shared SMB printers. To share your printer as a Samba (SMB) printer, all you need to do is configure basic Samba server settings as described in Chapter 18. All your printers should be shared on your local network by default. The next section shows what the resulting settings look like and how you might want to change them.

When you configure Samba, as described in Chapter 18, the /etc/samba/smb.conf file is configured to allow all your configured printers to be shared. Here are a few lines from the smb.conf file that relate to printer sharing:

The settings shown resulted from configuring Samba from the Samba Server Configuration window. In this case, I selected to use encrypted passwords. The lines show that printers from /etc/printcap were loaded and that the CUPS service is being used. Password encryption is on and the /etc/samba/smbpasswd file stores the encrypted passwords. Because password sync is on, each user’s Samba password is synchronized with the local UNIX password for the user.

The last few lines are the actual printers definition. It shows that users can print to all printers (printable = yes).

Chances are good that if you are configuring a Samba printer on your Fedora Linux computer, you will want to share it with Windows clients. If Samba is set up properly on your computer, and the client computers can reach you over the network, finding and using your printer should be fairly straightforward.

The first place a client computer should look for your shared Samba printer is in Network Neighborhood (or My Network Places, for Windows 2000 and XP). From the Windows 9x desktop, double-click the Network Neighborhood icon. (From Windows 2000 or XP, double- click the My Network Places icon.) The name of your host computer (the NetBIOS name, which is probably also your TCP/IP name) should appear on the screen or within a workgroup folder on the screen. Open the icon that represents your computer. The window that opens should show your shared printers and folders. 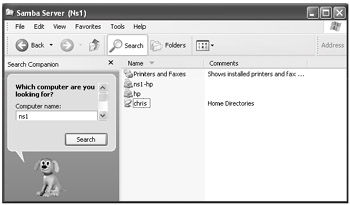 Figure 17-4:   Find and display your Samba printer from Find: Computer.

After your shared printer appears in the window, the client can configure a pointer to that printer by opening (double-clicking) the printer icon. You should see a message telling you that you must set up the printer before you can use it. Click Yes to proceed to configure the printer for local use. The Add Printer Wizard appears. Answer the questions that ask you how you intend to use the printer, and add the appropriate drivers. When you are done, the printer will appear in your printer window. It can now be selected as the printer for any application program in Windows.