In previous DotNetNuke releases, the framework offered only a single security solution; the formsbased security that was included with the core release. That security worked well, but it limited the capability to implement DotNetNuke in a way that tightly integrates with other security mechanisms. Third-party developers provided enhancements that allow Windows authentication to be used, and DotNetNuke 4.0 supports Windows authentication directly in the core release.

In ASP.NET 1.x, the native authentication and authorization services relied on external data stores or configuration in the web.config file. For example, in ASP.NET 1.1, an application can provide formsbased authentication. This requires the developer to create a login form and associated controls to acquire, validate, and manage user credentials. After authenticatation, authorization is provided through XML configurations in the web.config file.

In ASP.NET 2.0, the introduction of several new security enhancements expands on these services in three distinct ways:

Together these three components reduce the amount of code that is required to provide authentication and authorization services and persist the data to a data store.

To build an application that fully supports authentication in ASP.NET 2.0, the Membership Provider has to be integrated into the application. There are several benefits to using this provider in an application. First, it can reduce the amount of code that is written to bring these services to the application. This is true as long as the business requirements fall within the functionality that the default Membership Provider supplies. Second, implementing the Membership Provider promotes developer and consumer confidence because Microsoft has taken on the responsibility of ensuring that its provider follows optimal security standards and has been subjected to rigorous threat modeling and penetration testing.

DotNetNuke supports running many portals from a single DotNetNuke installation. Each portal has its own users and roles that are not shared with other portals. A portal is identified by a unique key: the PortalID.

Because the default Membership Provider implementation is a generic solution, it does not natively support the concept of having multiple portals, each with its own users and roles. The default implementation was designed in a way that supports only a single portal site in a DotNetNuke installation. The Membership Provider refers to the DotNetNuke installation as an application, and without customization, that application can support only a single set of users and roles (a single portal instance).

To achieve the full benefit from the Membership Provider, it is important to recognize that user information can be externalized from DotNetNuke and held in a data store that is independent of the main data store. For instance, DotNetNuke may use Microsoft SQL Server as its database to store content and system settings, but the Membership Provider may use Windows authentication, LDAP, or another mechanism to handle authentication and authorization. Because security can be externalized using the Provider Model, it was important to ensure that the implementation of the Membership Provider didn't customize any code or database tables used by the provider. Those data tables had to be independent from the other core DotNetNuke tables. We could not enforce referential integrity between DotNetNuke data and the Membership Provider data, nor could we use cascade deletes or other data level synchronization methods — all of the magic had to happen in the business layer. 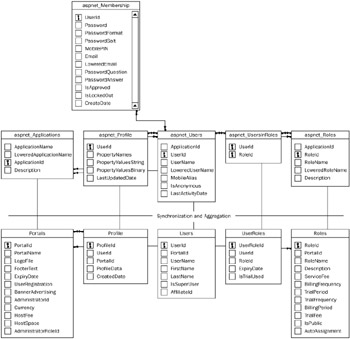 Because the data for portals, profiles, users, and roles is stored in multiple unrelated tables, the business layer is responsible for aggregating the data. For example, you cannot get a complete representation of a user without collecting data from both the aspnet_Users table (from the Membership Provider) and the Users table (native DotNetNuke table).