Note:  The approach to software life cycle listed above is sometimes referred to as the "waterfall" approach where one phase follows immediately after the other.

Note:  Each of these phases produces documents. As the project progresses, these documents will have to be written and then rewritten. Some believe that documentation is so important that when discussing the 5-phases a sixth phase should be added: the documentation phase.

Note:  Errors in the software system can be created in any one of the 5-phases. Some of the causes of these errors are:

The maintenance phase starts this process all over so you can see that software development can take a long time and in fact never end.

Note:  Although not discussed during this course, a user's manual should be created. Its construction should begin during the first phase and should continue until after the project is completed.

Note:  Although not discussed in this course, part of the phases should be a training phase both of those who are to create the program as well as those who will use it. In addition some testing should be conducted in each phase with the major testing taking place during the Testing Phase. The quality assurance should continue throughout the project.

Note:  In a software development and maintenance organization, the different types of positions available can be:

Try to determine which of these positions best meets your qualifications and professional goals.

Note:  Some new terms have been added that better describe how the SLC is implemented. These terms are: White Box SLC, Grey Box SLC and Black Box SLC. By these terms the following is meant:

In this phase the analyst, the security and the quality assurance engineers attempt to do each of the following and to create software requirements specification documents that address these issues:

To be a good analyst you need to have:

At the end of this course, you need to ask yourself:

Note:  During this course you will prepare a specification document for each programming homework but you will not be required to act as a systems analyst.

Note:  This phase is sometimes referred to as the System Requirements Specification (SRS) phase. Part of this phase can include an analysis process called: Object Oriented Analysis (OOA) and System Security Specification.

Note:  As part of the SRS should be a determination and documentation of the training needs of the system users in order to increase the possibility of a successful project.

Note:  It is recommended that you read the following book:

In this phase sometimes be called Object Oriented Design (OOD), the programmer attempts to:

At the end of this course, ask yourself:

Note:  The need to off shore programming may decrease in the future because several companies are offering tools that take the designs that are created in UML 2.0+ and converting these design documents into C++ or C# programs as will be demonstrated later when UML charts in Visual Studio .NET 2005 will be used to write the definitions of classes. It is also possible with tools like these to convert C++ or C# program into UML design documents as will be seen later when Visual Studio .NET 2005 is used to convert class definitions into UML documents.

Some of the design tools:

System flowcharts show the interrelationship between different parts of the total system and the program being written: 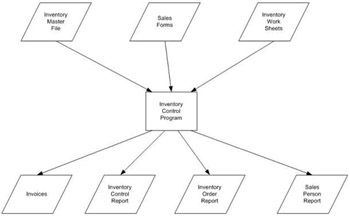 A structure chart shows the modules of the program being written and their relationships and in some cases the movement of data between the modules:

Flowcharts show the modules and their interrelationships, the program's logic and the variable names. 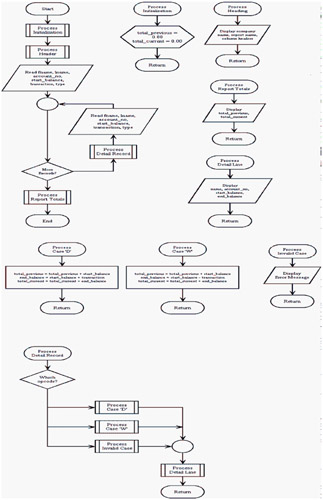 Pseudo code show the modules their interrelationships, the programs logic and the variable names but it does this using words:

Coding Phase (Implementation of the Design)

In this phase the programmer:

At the end of the course, ask yourself:

The code needs to satisfy the following criteria (This list is sometimes referred to as the developer's requirements to distinguish it from the program requirements):

In this phase the programmer or the Software Quality Assurance (SQA) staff checks each of the following:

In addition to testing during the Testing Phase, the SQA staff is aware that errors may occur in any of the phases and therefore they test each phase.

The SQA staff is aware that errors may occur for various reasons to include:

The SQA staff knows that there are different kinds of testing types which are required and uses them where appropriate.

The SQA staff knows that no matter how much they test the program, there will still be bugs and they strive to keep the number of errors within acceptable limits

At the end of the course, ask yourself:

Note:  The quality assurance staff might want to consider the purchase of one of the many testing software programs to support the testing process.

Note:  Testing done by the coding team may not yield quality testing because of their involvement in creating the code. In addition there may also be problems when the testing is conducted by members of the same company as the coding team. Sometimes it is necessary to contract with an outside testing company in order to gain quality testing.

Note:  One of the major causes of programs not passing the testing process is that the project had difficulty meeting SRS deadlines and staying within budget.

Note:  This discussion of SQA may seem to imply that software quality assurance does not begin until after the coding has been completed. What should be noted is that, the testing may need to begin as soon as the SRS has been accomplished or even as part of the SRS.

Note:  The SQA budget may be as much as 20% - 30% of the total cost of the program. It may be determined when considering the costs that the SQA should be handled by an outside SQA firm.

Note:  I recommend that you read the following book:

Testing consists of many different types of tests to include:

Note:  I recommend that you read the following book:

As a future programmer, it is important for you to know some of the reasons for the need of the maintenance phase. These reasons can be:

It is important for you to know:

It is also important for you to know that this phase can be the:

At the end of the course, you need to ask yourself: