Lecture 3: Functions and Modularization I and Text File IO

As a program becomes larger and more complex, you will find it necessary to break the program into smaller and more manageable pieces. These pieces are frequently called modules. The examples that follow begin the approach to writing programs that utilize modules. The process of designing programs by breaking them into these smaller pieces is called modularization.

The modularization of programs introduces an additional graphic to represent the relationship between the main program and all of its modular pieces. This graphic is called a hierarchical chart and is also called a structure chart. In Lecture 1 an accounting program was discussed. In that lecture the following structure chart was shown that illustrated the various parts/modules of that program: 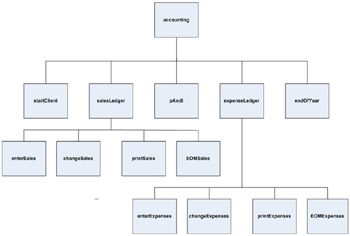 The pseudo code adds new features for modules as well. For example a partial pseudo code for this accounting program would be the following:

Note:  The …. above means that there are additional statements but they are left out. 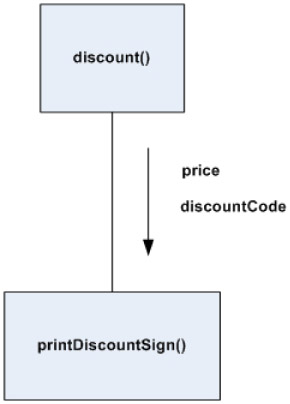 For the flowcharting of the modules the Subroutine symbol below is used to represent this modularization.

Using this flowcharting symbols, the above program would be depicted by the following flowchart:

Sometimes you may want to return to the calling module from a called module some value that was calculated in the called module. To do this it is possible to return a value as in the following pseudo code example: 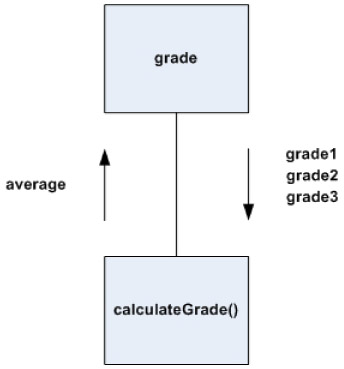 A flowchart for the above program is the following:

Notice in the above flowchart that the module calculateGrade( ) also has a flowchart. Further notice that the value of average is returned.

In the example above only the value of one variable average is changed in the called module and therefore only one variable in the calling program theAverage is changed. There are times in which more than one value needs to be changed in the calling module yet you do not want to use global variables. How this is handled will depend on the language used. More will be said about this later when the C++ implementation of these concepts are discussed.

Note:  Modularization is an extension of the structure theorem used in designing programs.