During the two decades since it was founded, Cisco Systems has developed a variety of useful proprietary network protocols on all layers of the Open System Interconnection (OSI) model. In this book, we are not concerned with their functionality and cool features; instead, we focus on the fact that these protocols give away all Cisco-made devices on an investigated network with ease and without a malicious hacker needing to send a single packet to the enumerated device. The hacker can simply look at the hosts sending the proprietary protocol's Protocol Data Units (PDUs) and hosts responding to them and log their MAC and IP addresses. Some of these protocols have known security flaws that allow exploitation of hosts sending them without any further device fingerprinting necessary. This helps an experienced attacker stay as quiet as possible on the attacked network. A list of common Cisco proprietary and related protocols, layer by layer, is presented in Table 5-1.

As you can guess from Table 5-1, by passively sniffing network traffic, it is possible to ob-tain far more data than many could have imagined. This includes the precise type of the Cisco device in use (for example, Cisco Cache Engine, Cisco VoIP phone, high-end Catalyst switch with Multilayer Switch Feature Card [MSFC]) and even the characteristics of a specific inter-face exposed to your eavesdropping (for example, the presence of a trunk port on a switch).

Remember that CDP, VTP, and PAgP updates are always forwarded on trunks with a VLAN 1 tag. So do not assume that you are on VLAN 1 (as you would love to be) if you see them. On the contrary, 802.1q updates are forwarded untagged on the VLAN 1 for interoperability reasons, unless VLAN 1 has been cleared from the trunk port. Cisco PVST+ updates are sent and tagged for all other VLANs. Watching for these small details helps you determine which VLAN you are on, an important prerequisite for VLAN jumping/trunk port-forcing attacks, described later in the book.

Other vital considerations when strolling through Cisco proprietary protocols flying across the network include the presence of H.323 (VoIP) and VPN traffic and the struc-ture of the STP tree. An STP root switch should be the "fattest" switch on the network, and you want your box to become a root switch instead of the legitimate one (we cover STP attacks in Chapter 12). Finally, the detailed enumeration of interior gateway proto-cols (IGPs) (such as IGRP) was discussed in Chapter 4.

Cisco Discovery Protocol (CDP) is so important in Cisco device enumeration and fingerprinting that it deserves a section on its own. Wouldn't it be wonderful if a finger-printed device would effortlessly tell an attacker everything about itself? CDP does precisely thatalas, on the same broadcast domain only. Even better, it would run prac-tically over any Layer 2 protocol that supports Subnetwork Access Protocol (SNAP) encapsulation (all LAN media, HDLC, frame relay, and asynchronous transfer mode [ATM]) and is enabled by default on the majority (if not all) of Cisco hosts. To add insult to injury , an existing efficient Denial of Service (DoS) attack against Cisco routers ex-ploits CDP, and a method is available to extract the CDP and other data remotely by using a memory leak in old, but still frequently encountered , IOS 11.X versions.

The best way to see the characteristics and capabilities of CDP is by example:

Now, let's log in to the discovered neighbor devices:

All this information flies across the network in plaintext, and you don't need to log in to a router or switch and execute the commands shown above to see it. The output of the show cdp and show cdp interface commands demonstrates the default send-time and CDP cache holdtime values and shows that these two parameters can be adjusted on a per-interface basis. Note that while cisco-2611b can see both cisco2503 and Gromozeka, cisco2503 and Gromozeka do not see each other. From the output above, it is clear that cisco2503 and cisco-2611b are connected via a serial cable (encapsulation Point-to-Point Protocol, or PPP), and there is no direct link between cisco2503 and Gro-mozeka. Also, the 192.168.254.254 IP address advertised by cisco-2611b does not really fit into the IP ranges used on the network. Indeed, it's a loopback interface of a designated Open Shortest Path First (OSPF) router.

How you sniff-out CDP is entirely your choice. All common sniffers can dissect and present CDP frames. Figure 5-1 shows a CDP frame dissected by Ethereal and containing a wealth of informationfor example, the management VLAN number being changed from the default 1 to 9 . 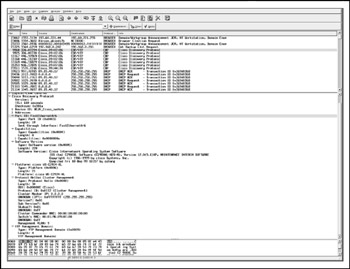 Very often, CDP traffic is in the air on the completely unprotected wireless networks. Thus, Kismet, a war-drivers' all-time favorite, has a CDP dissector and stores CDP data in plain ASCII in .cisco files. One would expect that the majority of CDP traffic on open wireless networks would originate from Cisco Aironet access points; however, we have seen all types of Cisco devices advertising themselves across the streets . Here is an entry for a VoIP phone caught somewhere in central London as we were war-driving in 2003:

Max Moser had also planned to include a CDP sniffer in his Wellenreiter, but he de-cided to release it as a standalone tool called cdpsniffer.pl . The only variable it takes is the name of an interface on which you want to sniff for CDP frames.

So if CDP gives away a lot of useful information for the attackers , why not turn it off by default? What is CDP good for? One case of a specific CDP use is for on-demand rout-ing (ODR), enabled by a router odr command. When multiple hub routers, many stub networks, or asynchronous connections exist between hubs and spokes , statically config-uring all stub networks on the hub routers becomes daunting. ODR allows easy install of IP stub networks with the "hubs" dynamically maintaining routes to the stub networks connected. To do that, ODR uses CDP updates to propagate its routing information. Thus, if you want to use ODR, you have to enable CDP.

Of course, CDP is a network monitoring protocol. As such, it is used by network management software suites such as CiscoWorks, IBM Tivoli NetView, or Netdisco (a nice, free, and open source network management tool). To enjoy the full functionality of these suites, running CDP is necessary. And in many cases, various show cdp com-mands can greatly assist system administrators in troubleshooting problems on their networks. It deserves to be mentioned that CDP version 2 (CDPv2) is far more helpful than the original CDPv1. It supports more rapid error tracking, covers unmatched switch port duplex states ( %CDP-4-DUPLEXMISMATCH: Full/half-duplex mismatch de-tected o1 error), and reports unmatched VLAN ID errors. Network management applications learn CDP information using SNMP with the CDP Management Informa-tion Base (CISCO-CDP-MIB). Since CISCO-CDP-MIB allows retrieval of CDP information via SNMP many hops away from the enumerated host, it can come in very handy for a remote attacker, providing that a read-only (RO) SNMP community is known.

In the next example, we use cdppoll.pl , written by user fingers ( http://www.perlmonks.thepen.com/80979.html ), to collect neighbor information from the small test network pre-viously used to show CDP capabilities:

All three Cisco devices on the network can be seen remotely; again the output from Gro-mozeka shows the loopback and not the Ethernet (192.168.66.202) address of Cisco 2611.

Countermeasures Against CDP and Other Cisco Proprietary Protocols-Based Enumeration

However, for some described cases you do want to run CDP. If you need it for trouble-shooting and the connectivity on the network is not lost, enable CDP only for the troubleshooting period. If you use ODR or network management applications that em-ploy CDP, use this protocol on a per-interface basis.

To turn off CDP for the interface on which it is not needed, go to that interface configuration mode and execute the no cdp enable command. On a CatOS switch, turning off global and interface CDP is done via a set cdp disable command:

There is no point to keeping CDP running on an interface not connected to other devices that understand CDP. And, of course, no CDP frames should ever leak away from the LAN and be sniffable on the "dirty" side of your gateway.

We have evaluated the following passive fingerprinting tools against the Cisco hosts in the testing lab:

We didn't use Siphon (the first publicly released passive fingerprinting utility) and Siphon-based Windows tools, since they haven't been updated for a very long time and are unlikely to show more recent versions of operational systems run by Cisco hosts used to write this chapter.

Our verdict is that, unfortunately , current passive fingerprinting techniques are not very reliable when used to discover and fingerprint Cisco devices. In fact, the only host reliably discovered to run Cisco IOS was the Aironet 1200 access point. At the same time, none of the tools tested could correctly identify 2503 and 2611 Cisco routers, 5005 and 2950 Catalyst switches, 515E and 501 PIX firewalls, and 3020 Cisco VPN concentrators . We'll illustrate it with a few examples.

In the following example, the device discovered as a Cisco 7200 router or Catalyst 3500 switch is, in fact, a Cisco Aironet 1200 access point on the same subnet. The sup-posed-to-be SunOS machine is a 5005 Catalyst switch merely one hop away from the machine running p0f.

Next, the only discovered Cisco host is the access point. Two other hosts with "un-known" signatures are Cisco 2503 and 2611 routers:

In the next example, the Perl tool has discovered the access point, but the version of IOS shown is incorrect:

Our observations discredit neither the available passive fingerprinting methodologies nor the tools implementing them. After all, the tools we evaluated performed very well against various Linux machines to determine the correct (or nearly correct) kernel ver-sions. However, more effort is needed to create up-to-date passive fingerprinting signature databases reflecting the behavior of IOS, CatOS, PIX OS hosts, and Cisco VPN concentrators.