In a one-to-one relationship setup, as shown in Figure 7.2, there is a direct mapping between the MySQL server and your application server. Each instance of your application server has a single running instance of MySQL that it connects to. Normally, this is on the same physical server, using local connections between the two servers. Under this level, you can have any number of data nodes. For example, if you have four Apache servers, you would have four MySQL servers, with each of them running on the same physical server as the Apache server does, and then two data nodes running on different hardware below them. This allows for automatic load balancing because you only have to load balance in front of the application server, which is normally a relatively easy task. Also, this handles hardware failures properly because when the hardware fails, you lose both the application server and the MySQL server, which prevents any waste of resources. 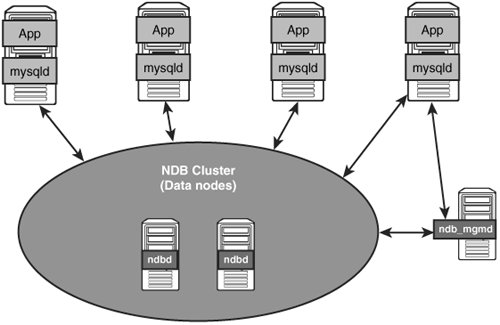 The problem with using this method is that it doesn't work for all types of applications. It only works where you have a limited number of programs that will connect to MySQL. This works well in situations such as web applications, but it doesn't work for client/server model types of applications. In addition, it prevents you from scaling different portions of your architecture at different paces because you need to maintain the one-to-one relationship. 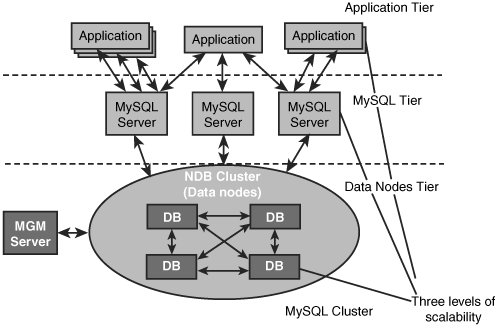 The client/server setup is very similar to the Web farm/MySQL farm discussed in the preceding section. The only difference is that this setup has many clients instead of a small set of application servers as the few connecting clients. An example of this would be an application that runs on a desktop client and logs directly in to MySQL across the network for reporting purposes. In this case, you will need to generally scale the MySQL servers in a much faster way, based on the number of client applications.

Beginning Cryptography with Java
MySQL Clustering
Practical Intrusion Analysis: Prevention and Detection for the Twenty-First Century: Prevention and Detection for the Twenty-First Century
Pocket Guide to the National Electrical Code(R), 2005 Edition (8th Edition)
Microsoft WSH and VBScript Programming for the Absolute Beginner
GDI+ Programming with C#
Flylib.com © 2008-2020.
If you may any questions please contact us: flylib@qtcs.net
Privacy policy
This website uses cookies. Click here to find out more.
Accept cookies