More importantly, from a WebSphere Portal perspective, RACF users and non-RACF users can be defined in the same LDAP directory and portal users are unaware of any differences from what is normally done to log into the portal.

If all portal users are created from new, then all those userids will be created in LDAP server as normal. More often than not, z/OS enterprises will have existing users in RACF who need access to the portal along with the newly registered external portal users. Therefore a mechanism is needed to be able to authenticate using both LDAP and RACF.

As was mentioned in Chapter 1, "Benefits of having WebSphere Portal on z/OS" on page 16 one of the benefits of having the LDAP server running on the z/OS system is that you can do native authentication. Native authentication allows connection between the LDAP server and RACF wherein the userid and password that is used to authenticate to LDAP is actually passed to the System Security Server to be verified. This setup allows new internet or extranet portal customers to authenticate directly against the LDAP server, while existing RACF intranet users would be authenticated using their RACF userid and password. The architecture at a high level is shown Figure 7-12 on page 299, where userid java3 is also configured as the native-id attribute in LDAP, resulting in the authentication request going to RACF. For a complete description of how this is done refer to Putting the Latest z/OS Security Features to Work, SG24-6540. 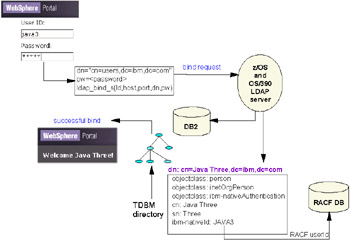 7.5.3 Steps to implement the solution

The way we implemented the solution was basically to re-run some of the LDAP configuration steps described in Step seven: Configure LDAP server. There are two parts:

1. Add the object class to the LDAP server

We show the steps performed on our z/OS system to add the required object class to the LDAP server.

The schema to be added is an IBM schema that includes definitions for handling Native Authentication from LDAP to RACF. It is stored in an LDAP Directory Interchange Format (LDIF) file called schema.IBM.ldif that is found in the /tmp directory. We made a copy of that file in the /tmp directory and called it schema.IBM.itso.ldif. The only modifications made to it are shown in Example 7-1.

We changed the DN to match the DN that we used for WebSphere Portal on z/OS and OS/390 namely, "dc=itso,dc=com". By default the file contains O=WASLRAC because it applies to the WebSphere Application Server DN which we were not using.

In order to apply this new schema you can copy and reuse the existing shell script of WebSphere Application Server and point to our new LDIF file.

We copied /tmp/bboldtbm.sh to /tmp/bbomtdbmitso.sh and made the modifications as shown in Example 7-2:

In order to modify the schema you need to run the modified bboltdmmitso.sh shell script. Make sure you are logged to the system as a user with UID=0 and run the script as shown:

The generic syntax of that command is:

The output of that script should tell you that your DN was modified.

To enable native authentication in Portal for z/OS LDAP server you need to modify the property file (slapd.conf) of the specific LDAP server used for portal. That file is located <WAS_HOME>/<SYSPLEX_NAME>/etc/ldap and is called <SYSPLEX_NAME>.bboslapd.conf.portal.

In our case it was:

Modify the file as shown in Example 7-3 in bold. Instead of "dc=ibm,dc=com" you need to specify the DN suffix you chose for your z/OS portal. It has to match the suffix that is recognized by TDBM which you should find at the end of your file.

Configuration options of the three parameters are as follows:

The LDAP server for WebSphere Portal on z/OS and OS/390 should be restarted, for the changes that were made to enable Native authentication, to take effect.

Examine the log for the BBOLDAT job. It should show that Native Authentication is enabled as shown in Example 7-13 on page 303. Notice the line that reads - GLD3132I The useNativeAuth configuration option SELECTED has been enabled. 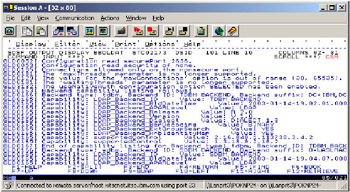 2. Add the attribute to user entries in LDAP

Using the DMT as an example we show how to add the ibm-nativeId attribute to users in LDAP.

Modifying the user attribute in LDAP

IBM Directory Server (IDS) comes with a client tool that can connect to any LDAP server and allows you to manage the directory. It is known as the Directory Management Tool (DMT) and the executable is found in <IDS_HOME>/bin directory on the distributed platform. We used this graphical user interface (GUI) tool to see the changes made in the previous step and to manually add the attribute to a user entry.

There are other LDAP browsers that one could use.

Bring up the WebSphere Portal login page via the URL

Enter the User ID and Password and make sure you can authenticate successfully. Interestingly, when you log into WebSphere Portal successfully there is no way to tell whether the authentication was done by the LDAP server or by RACF. Therefore, to verify that the native authentication is truly setup correctly, you have to run a negative test.

Enter the User ID of a user that exists in RACF. Enter a wrong password and attempt to login. You should not be successful. If you examine the system log using z/OS System Display and Search Facility (SDSF) you should see a message from RACF rejecting the authentication. That tells us that the userid and password was passed on to RACF because of the special LDAP attribute, namely ibm-nativeId, and indeed RACF performed the authentication check but returned a failure.

That successfully demonstrates the setup and verification of Native Authentication.

Here we provide sample solutions to add RACF users to the LDAP database.

Accessing RACF via an LDAP browser

Users in RACF can be exported to an LDAP LDIF file by using an LDAP client. For example we used a freely available LDAP Browser with an LDIF export capability. To use the LDAP client and access RACF you need to sign on with the following DN format: racfid=<userid>,profiletype=user,o=WASLRAC as shown in Figure 7-21. 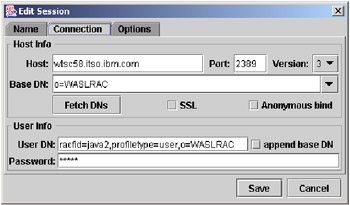 Figure 7-22 on page 311 shows the LDAP client display of users in RACF. 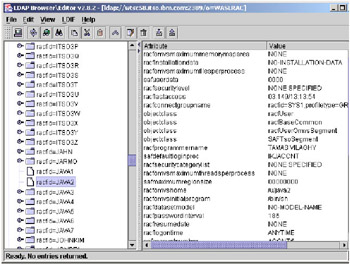 After using the LDAP client to export all the users to an LDIF file the format, the partial contents of the file is shown in Example 7-4.

This format, with a single line for each user is quite easy to modify using a variety of tools. The only part we are interested in is the userid's identified by field racfid. We need to identify which users we do want to add to the Portal Server LDAP for native authentication and discard all other users. A suggested way to parse and modify the file are:

The LDIF format exported needs to be parsed as suggested and converted into the LDIF format used by Portal Server, with its required attributes. As an example of this we added two users. CHEN and JAVA7 to an LDIF file, we called NAUpdate.ldif as shown in Example 7-5. Note that the required format does not use or need an attribute for the userpassword.

In our example user CHEN was not in RACF, but user JAVA7 was in RACF. We added the users to the Portal server LDIF by executing the following command:

After this we tested that the changes were successful as follows:

We tried to login to Portal server using userid CHEN. This did not succeed due to an authentication error because userid CHEN was not in RACF.

We logged in successfully to Portal server using userid JAVA7, which was in RACF, and confirms the successful modification of LDAP with users authenticating via native authentication.

If you are planning on exporting a large amount of RACF userid(s) into LDAP server as registered Portal users, use the following example.

First, here are the steps for exporting your RACF native userids to a file using the LDAP Browser which has an LDIF export capability.

Second, we have prepared and tested a sample REXX program and a template file with predefined tokens similar to Example 7-5 on page 312 for you to use. Please refer to Appendix D, "Additional material" on page 339 for details how to get the files. You will need to unzip the downloaded file. The zip file contains:

You will then need to upload all these four files to the z/OS mainframe area.

Logon to TSO and use ISPF 3.2 to create three new datasets:

To invoke the REXX program, you should logon to TSO, then ISPF and select option 6, "command". At the ISPF Command Shell prompt, enter "exec <YourHLQ>.JOBS.CNTL(CONVLDIF)" to execute the CONVLDIF REXX program. The merged output should be in the <YourHLQ>.MERGED.OUTPUT dataset.

Once you have modified all the required dataset prefixes and ldif suffix changes, you should be able to execute this REXX program and review the merged output file. After validating the results, the next step is to import the ldif file into your Portal LDAP server using the ldapmodify command.