Taking a Look at Lookup Properties

As you have been working with table design, you’ve probably noticed that there’s a Lookup tab available in the lower part of the Table window in Design view. You might have also noticed that Access 2007 offers you a Lookup Wizard entry in the drop-down list of data types and a Lookup Column option in the Tools group on the Design tab. This feature allows you to predefine how you want the field displayed in a datasheet, form, or report. For example, if you have a DepartmentID field in an Employees table that stores the primary key value of the department for which the employee works, you might want to display the department name rather than the number value when you look at the data. If you’re displaying a Yes/No field, you might want to provide a dropdown list that shows options for invoiced and not invoiced instead of yes and no or true and false.

In the sample databases, we defined Lookup properties for only a few fields-ones for which we knew that we would later need a combo box with the relevant available choices on one or more forms or reports. (You will also see combo boxes described as drop-down lists.) One such example is in the Housing Reservations sample database (Housing.accdb). Open the database, view the table objects, select tblEmployees, and open it in Design view. Click the DepartmentID field and then click the Lookup tab to see the settings as shown in Figure 5–34. 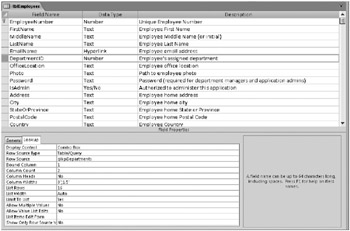 Figure 5–34: The DepartmentID field in tblEmployees in the Housing Reservations sample database has Lookup properties defined.

As you can see, we have set the Display Control property to Combo Box. You see combo boxes in Windows applications all the time. It’s a box that you can type in with a button on the right that you can click to drop down a list of values to select. In Access, you tell the combo box what type of list you want (Row Source Type) and specify the source of the list (Row Source). Access is a bit unusual because it lets you define a list that contains more than one column that you can display (Column Count), and it requires you to specify which of the columns (Bound Column) actually supplies the value to be stored when you pick an item from the list. This means that you might see a text value, but the combo box stores a number.

You can see this combo box in action by switching to Datasheet view. You can click in the Department field and type a name from the list, or click the arrow on the right and select an item from the list as shown in Figure 5–35. Remember, DepartmentID is actually a number. If you didn’t define the special settings on the Lookup tab, you would see a list of numbers in the Department column. For details about these settings, see Table 5–4 on page 243.

Figure 5–35: The Lookup tab settings show you a combo box in Datasheet view.

We decided to go ahead and define these properties in this table because we knew we were probably going to use a combo box in one or more forms that we would build later to display related department information while editing an employee record. By setting the values in the table, we can avoid having to define the combo box settings again when we build the forms. If you want to see how this works on a form, you can open frmEmployeesPlain in the Housing Reservations database. (Although you can open the “production” version of frmEmployees from the Navigation Pane, code in that form prevents you from updating any data unless you are signed on to the application.) You can see the result in Figure 5–36. 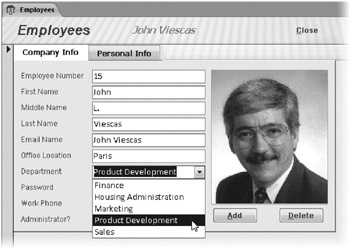 Figure 5–36: The table Lookup tab properties were inherited by the combo box on frmEmployeesPlain.

Table 5–4 gives you an overview of what the lookup settings mean. When you study combo box controls later, in Chapter 11, “Building a Form,” you’ll see how you can also use lookup properties to display lists from related tables in a form. In Chapter 11 we’ll also explore the Combo Box Wizard, which makes it easy to correctly define these settings.