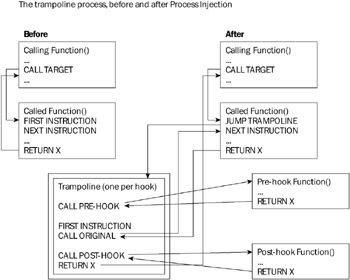 The initial version of Ghost also has a method to offset where the jump is placed in the original function. This enables a matching pattern to start after a critical instruction, such as retrieving a global variable. Because ZwMapViewOfSection is used before global variable locations have been localized, a function that has a first instruction to load a global address cannot be copied and used later. To get around this problem, the jump can be inserted further into the original function. If the location of the jump is after the function’s stack adjustment, there will need to be a late stack adjustment so that hooked functions can get to the original stack location.