SSL was developed by Netscape Communications Corporation in 1994 to secure transactions over the World Wide Web. Soon after, the Internet Engineering Task Force (IETF) began work to develop a standard protocol to provide the same functionality. SSL 3.0 was used as the basis for that work, which is known as the Transport Layer Security (TLS) protocol. The implementation of the SSL/TLS protocol in Windows Server 2003 closely follows the specification defined in RFC 2246, “The TLS Protocol Version 1.0.”

SSL is widely used because it provides strong authentication, message privacy, and data integrity. Unlike other proprietary techniques for improving communication security, SSL is an open standard that is widely deployed and supported by a variety of servers and clients. As a result of the wide adoption, the security community has carefully examined the SSL standards and popular SSL implementations. This close examination, combined with the relative maturity of the SSL standards, has resulted in a highly secure method for authenticating clients and servers and protecting the privacy of communications.

SSL provides encryption, authentication, and data integrity by using a public key certificate. When the SSL session is established, the server’s public key certificate is used to encrypt and exchange a shared secret between the client and server. This shared secret is then used to encrypt communications for the rest of the session. The following describes the step-by-step procedures for establishing an SSL session:

The session key can then be used as a shared secret to encrypt and decrypt data exchanged between the client and server.

IPSec is commonly used to provide the same services as SSL: authentication, privacy, and message integrity. However, the approach IPSec takes is different from that of SSL. IPSec is implemented by the operating system and is completely transparent to the applications that use IPSec. As a result, IPSec can be used to protect almost any type of network communication. IPSec also provides a flexible authentication scheme. The Microsoft Windows implementation of IPSec allows clients and servers to authenticate each other by using either public key certificates or a shared secret.

SSL, on the other hand, must be implemented by individual applications. Therefore, you cannot use SSL to encrypt all communications between two hosts. Additionally, SSL is less flexible than IPSec because it only supports authentication by means of public key certificates. SSL does provide several distinct advantages, however. Most significantly, SSL is supported by a wide variety of servers and clients, and the maturity of the standard has practically eliminated interoperability problems.

Additionally, SSL allows one-way authentication, while IPSec requires both sides of a connection to authenticate. One-way authentication allows SSL to be used to authenticate the server without placing the burden of registering for a public key certificate on the client. This enables SSL to be used to encrypt communications with public Web sites while protecting the privacy of the end user by not revealing the details of a user certificate to the Web server. Table 11.1 summarizes the differences between SSL and IPSec.

As with any public key infrastructure (PKI), SSL certificates can only be trusted if the root certification authority (CA) is trusted. You can use Group Policy objects (GPOs) to add your CA to the list of trusted root CAs on clients on an intranet, but it is much more difficult to configure clients on the public Internet. For this reason, if you do not control the client computers, you should obtain an SSL certificate from a public CA that is trusted by the client applications that will be establishing a connection to your server. If the server is a Web server, your clients will be Web browsers. As shown in Figure 11.1, Microsoft Internet Explorer is configured by default to trust a large number of public CAs. 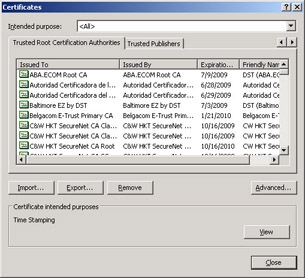 If the client does not trust the CA that issued your certificate, the client will usually show a warning to the end user, as shown in Figure 11.2. This warning does not prevent the user from establishing an SSL-encrypted session with your server. However, the warning might cause the user to cancel the connection. Although establishing a connection to a server with an untrusted CA still provides encryption and message integrity, using an SSL certificate issued by an untrusted CA defeats the purpose of the authentication provided by SSL. 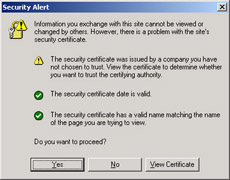 Applications use a unique port number for SSL-protected communications. As a result, you must change your firewall configuration to allow the encrypted traffic.

There are two approaches to allowing SSL traffic through a firewall. The first approach is to open the firewall to allow all traffic with a designated port. The typical ports that various applications use for SSL are listed in Table 11.2. Although this will allow SSL sessions to be established through the firewall, the firewall will not be able to analyze the contents of the SSL-encrypted packets. As a result, the firewall will be able to use only the origin and destination of the packet to determine whether to let packets through.

The following questions are intended to reinforce key information presented in this lesson. If you are unable to answer a question, review the lesson materials and try the question again. You can find answers to the questions in the “Questions and Answers” section at the end of this chapter.