Chapter 2 will begin to define the general concepts of the storage networking model and the differences between it and the client/server storage model. Well explore the details of how application design and system implementation influences storage infrastructures . With these discoveries, well begin to demonstrate the benefits of storage networking and how it meets the challenges posed by traditional client/server storage implementations as discussed in Chapter 1. By understanding the characteristics of business and support applications, the inherent value in putting storage on the network begins to take shape. Using standard IT planning activities and the upfront knowledge of application-oriented issues, integrating storage networking design benefits prior to system implementations will greatly increase an IT organizations ability to develop a successful storage infrastructure.

Client/server storage continues to use an I/O bus connectivity standard to communicate with storage devices, both from an internal and external perspective to the server. The I/O bus standard has evolved from original ISA bus configurations (standard to early PC servers) to todays Peripheral Component Interconnect or PCI. The server uses the I/O bus to connect with a storage device; however, it then communicates with the device through a device-specific language or protocol.

These range from ATA and ASA device protocol standards to SCSI, the Small Computer Storage Interface protocol. SCSI is the most popular among device vendors and customers for use with externally connected storage devices because of their capability to support multiple devices and more sophisticated data protection strategies such as RAID (Redundant Array of Inexpensive Disks). It is important to distinguish between the bus and device communications standards and methods because device communication protocols, like SCSI, and data protection architectures, like RAID, will continue to be used within storage networking solutions. However, as well discover, the I/O bus connectivity model will give way to network connectivity architecture. (More detailed information on the I/O bus, bus standards, and device protocols can be found in Chapters 6 and 7.)

As indicated in Figure 2-1, the storage devices were directly connected to the server, regardless of the type of protocol. This required all communications with the data stored on the storage devices to be handled by the server. As we have seen from examples of data warehousing and web site data movement, this places a tremendous amount of overhead on the server. Rendering it, as we have seen, to further specialization just to handle the overhead of dealing with application data. 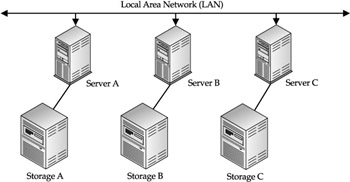 Storage networking technologies have evolved into two distinct modelsNetwork Attached Storage, commonly referred to as NAS, and Storage Area Networks, referred to as SAN. NAS allows storage to be placed onto an existing client/server network based upon Ethernet standards utilizing the standard TCP/IP network protocols. SANs, on the other hand, create a unique network just for storage and are based on a protocol called Fibre Channel. (More information can be found in Chapter 16.)

Both NAS and SAN are depicted in Figures 2-2 and 2-3, respectively, showing enhancements to the client/server computing model. 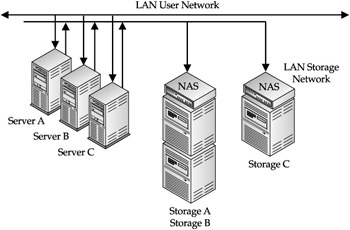 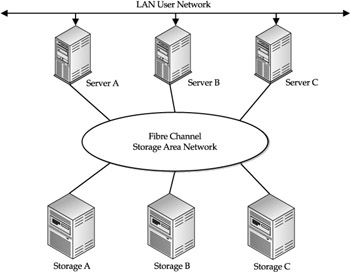 In the future, distributed computer systems will increasingly take on characteristics of our urban and transportation infrastructures. Our data is stored in large server farms that produce circumstances and problems similar to those in a large metropolitan area, managing traffic flow in and out, policing and monitoring performance and security, and handling overcrowding and sprawl and the occasional accident .

Fueled by powerful servers connected to larger and larger storage systems, the Internet will continue to evolve into a complex array of data highways that literally crisscross the globe. This complex network of highways allows users to access data regardless of location, application logic, or specific storage system. These conditions will accelerate the growth of concentrated data areas that serve both public and private data highways (e.g., Internet and intranet networks).

Metro Data Areas will be located in corporate data centers, Internet service provider infrastructures, government and public institutions, and small business computer configurations. Research indicates that Metro Data Area evolution is being driven by an almost 100 percent annual growth in online storage. The Metro Data Area will be driven into the next generation of storage technology in an attempt to deal with this congestion and scalability dilemma and to construct a data transportation system that will handle the tremendous amount of data moving in and out of these areas.

Be prepared for the rush hour commute. How long will it eventually take to get your data?