If someone is logged on and a process initiates a shutdown by calling the Win32 ExitWindowsEx function, a message is sent to Csrss instructing it to perform the shutdown. Csrss in turn impersonates the caller and sends a Windows message to a hidden window owned by Winlogon telling it to perform a system shutdown. Winlogon then impersonates the currently logged on user (who might or might not have the same security context as the user who initiated the system shutdown) and calls ExitWindowsEx with some special internal flags. Again, this call causes a message to be sent to Csrss requesting a system shutdown.

This time, Csrss sees that the request is from Winlogon and loops through all the processes in the logon session of the interactive user (again, not the user who requested a shutdown). For each process that owns a top-level window, Csrss sends the WM_QUERYENDSESSION message to each thread in the process that has a Windows message loop. If the thread returns TRUE, the system shutdown can proceed. Csrss then sends the WM_ENDSESSION Windows message to the thread to request it to exit. Csrss waits the number of seconds defined in HKCU\Control Panel\Desktop\HungAppTimeout for the thread to exit. (The default is 5000 milliseconds.)

If the thread doesn't exit before the timeout, Csrss displays the hung-program dialog box shown in Figure 4-3. (You can disable this dialog box by changing the registry value HKCU\Control Panel\Desktop\AutoEndTasks to 1). This dialog box indicates that a program isn't shutting down in a timely manner and gives the user a choice of either killing the process or aborting the shutdown. (There is no timeout on this dialog box, which means that a shutdown request could wait forever at this point.) 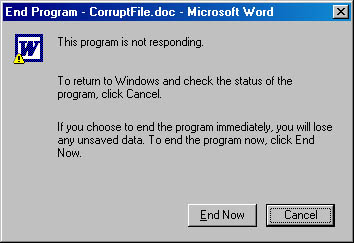 If Csrss finds a console application, it invokes the console control handler by sending the CTRL_LOGOFF_EVENT event. (Only service processes receive the CTRL_SHUTDOWN_EVENT event on shutdown.) If the handler returns FALSE, Csrss kills the process. If the handler returns TRUE or doesn't respond by the number of seconds defined by HKCU\Control Panel\Desktop\WaitToKillAppTimeout (the default is 20000 milliseconds), Csrss displays the hung-program dialog box shown in Figure 4-3.

Next, Winlogon calls ExitWindowsEx to have Csrss terminate any COM processes that are part of the interactive user's session.

At this point, all the processes in the interactive user's session have been terminated. Winlogon calls ExitWindowsEx again, but this time in the system process context, which again sends a message to Csrss, which looks at all the processes belonging to the system context and performs and sends the WM_QUERYENDSESSION/WM_ENDSESSION messages to GUI threads (as before).Instead of sending CTRL_LOGOFF_EVENT, however, it sends CTRL_SHUTDOWN_EVENT to console applications that have registered control handlers. Note that the SCM is a console program that does register a control handler. When it receives the shutdown request, it in turn sends the service shutdown control message to all services that registered for shutdown notification. For more details on service shutdown (such as the shutdown timeout Csrss uses for the SCM), see the "Services" section in Chapter 5.

Once Csrss has finished its pass notifying system processes that the system is shutting down, Winlogon finishes the shutdown process by calling the executive subsystem function NtShutdownSystem. This function calls NtSetSystemPowerState to orchestrate the shutdown of drivers and the rest of the executive subsystems (Plug and Play manager, power manager, executive, I/O manager, configuration manager, and memory manager).

For example, NtSetSystemPowerState calls the I/O manager to send shutdown I/O packets to all device drivers that have requested shutdown notification. This action gives device drivers a chance to perform any special processing their device might require before Windows 2000 exits. The configuration manager flushes any modified registry data to disk, and the memory manager writes all modified pages containing file data back to their respective files. If the option to clear the paging file at shutdown is enabled, the memory manager clears the paging file at this time. The I/O manager is called a second time to inform the file system drivers that the system is shutting down. System shutdown ends in the power manager. The action the power manager takes depends on whether the user specified a shutdown, a reboot, or a power down.