Windows 2000 includes network services that build on the APIs and components we've presented in this chapter. Describing the capabilities and detailed internal implementation of these services is outside the scope of this book, but this section provides a brief overview of remote access, Active Directory, Network Load Balancing, File Replication service (FRS), and Distributed File System (DFS). In addition, Windows 2000 supports several services that are based on extensions to the TCP/IP protocol. These include network address translation (NAT), Internet Protocol security (IPSec), and Quality of Service (QoS), and we conclude with a look at each.

Object classes and the attributes that define properties of objects are specified by a schema. The objects in the Active Directory schema are hierarchically arranged, much like the registry's logical organization, where container objects can store other objects, including other container objects. (See Chapter 8 for more information on container objects.) 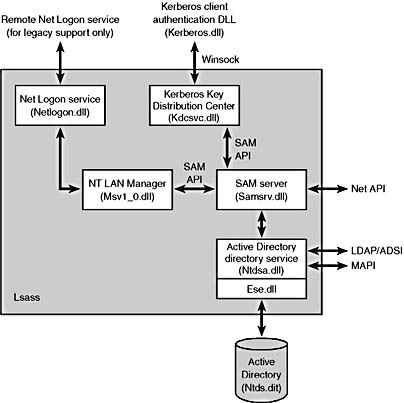 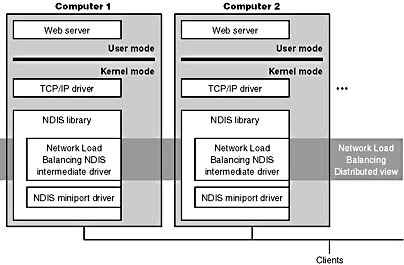 File Replication service (FRS) is included with Windows 200 Server. Its primary purpose is to replicate the contents of a domain controller's \SYSVOL directory, which is where Windows 2000 domain controllers store logon scripts and group policies. (Group policies permit administrators to define usage and security policies for the computers that belong to a domain.) In addition, FRS can be used to replicate Distributed File System (DFS) shares between systems. FRS allows for distributed multimaster replication, which enables any server to perform replication activity. When a replicated directory or file is changed, the changes are propagated to the other domain controllers.

The fundamental concept in FRS is a replica set, which consists of two or more systems that replicate between themselves the contents of a directory tree according to an administratively defined schedule and topology. Only directories on NTFS volumes can be replicated because FRS relies on the NTFS change journal to detect changes to files in directories in a replica set. Because FRS is based on multimaster replication, it can theoretically support hundreds or even thousands of systems as part of a replica set, and the computers of a replica set can be connected with arbitrary network topologies (such as ring, star, or mesh). Computers can also be members of multiple replica sets.

FRS is implemented as a Win32 service (\Winnt\System32\Ntfrs.exe) that uses authenticated RPC with encryption to communicate between instances of itself running on different computers. In addition, because Active Directory contains its own replication capabilities, FRS uses Active Directory APIs to retrieve FRS configuration information from a domain's Active Directory.

Distributed File System (DFS) is a service that layers on top of the Workstation service to connect together file shares into a single namespace. The file shares can reside on the same or on different computers, and DFS provides client access to the resources in a location-transparent manner. The root of a DFS namespace must be a file share defined on a Windows 2000 server.

The components that make up the DFS architecture are shown in Figure 13-23. The server-side implementation of DFS consists of a Win32 service (\Winnt\System32\Dfssvc.exe) and a device driver (\Winnt\System32\Drivers\Dfs.sys). The DFS service is responsible for exporting DFS topology management interfaces and maintaining the DFS topology in either the registry (on non-Active Directory systems) or Active Directory. The DFS driver performs topology lookups when it receives a client request so that it can direct the client to the system where the file it is requesting resides.

NAT components on Windows 2000 consist of a NAT device driver that interfaces with the TCP/IP stack as well as editors that an administrator uses to define address translations. NAT can be installed as a protocol with the Routing And Remote Access MMC snap-in or by configuring Internet connection sharing using the Network And Dial-Up Connections tool (though NAT is much more configurable when installed using the Routing And Remote Access MMC snap-in).

Internet Protocol security (IPSec), which is integrated with the Windows 2000 TCP/IP stack, provides protection for IP data against snooping and manipulation and defends against IP-based attacks. Both goals are met through cryptography-based protection services, security protocols, and dynamic key management. IPSec-based communication includes these properties:

IPSec on Windows 2000 relies on group policies that are stored in Active Directory for configuration, and it uses Active Directory's Kerberos version 5 authentication to authenticate computers that participate in IPSec message exchange. IPSec uses private/public keys pairs based on the Windows 2000 CryptoAPI certificate services for encrypting and decrypting IPSec message data and passwords as part of its authentication process. (See the section "Encrypting File System Security" in Chapter 12 for more information on CryptoAPI.)

IPSec's implementation consists of an IPSec device driver (\Winnt\System32\Drivers\Ipsec.sys) that integrates with the TCP/IP protocol driver. In user space, a policy agent obtains IPSec configuration information from Active Directory and passes IPSec filtering information (IP address filters for which IPSec communications should be used) to the IPSec driver and security settings to an Internet Key Exchange (IKE) module. The IKE module waits for security association requests from the IPSec driver and negotiates the requests, passing the results back to the IPSec driver for use during authentication and encryption.

If no special measures are taken, IP traffic is delivered over a network on a first-come-first-serve basis. Applications have no control over the priority of their messages and can experience bursty network behavior, where they occasionally obtain high throughput and low latencies but otherwise receive poor network performance. Although this level of service is acceptable in most situations, an increasing number of network applications demand more consistent service levels, or Quality of Service (QoS) guarantees. Video conferencing, media streaming, and enterprise resource planning (ERP) are examples of applications that require good network performance. QoS allows an application to specify minimum bandwidth and maximum latencies, which can be satisfied only if every networking software and hardware component between a sender and receiver supports QoS standards such as IEEE 802.1p, an industry standard that specifies the format of QoS packets and how OSI layer 2 devices (switches and network adapters) respond to them.

Windows 2000 QoS support is based on a handful of Microsoft-defined Winsock APIs that allow an application to request QoS for traffic over their Winsock sockets. For example, an application uses WSCInstallQOSTemplate to install a QoS template that specifies desired bandwidth and latency. (Only applications with administrative privileges can use QoS.) A second API, the traffic control (TC) API, lets an administrative application more precisely control the traffic flow over networks attached to the computer.

The heart of the Windows 2000 QoS implementation is the Resource Reservation Setup Protocol (RSVP) Win32 service (\Winnt\System32\Rsvp.exe), as shown in Figure 13-24. The RSVP Winsock service provider (\Winnt\System32\Rsvp.dll) communicates application QoS requests via RPC to the RSVP service. The RSVP service in turn uses the TC API to control traffic flow. The TC API, which is implemented in \Winnt\System32\Traffic.dll, sends I/O control commands to the Generic Packet Classifier (GPC) driver (\Winnt\System32\Drivers\Msgpc.sys). The GPC driver communicates closely with the QoS packet scheduler NDIS intermediate driver (\Winnt\System32\Drivers\Psched.sys) to control the flow of packets to the network from the computer so that the QoS levels promised to particular applications can be met and to ensure that appropriate QoS headers can be placed on packets for which QoS is desired. 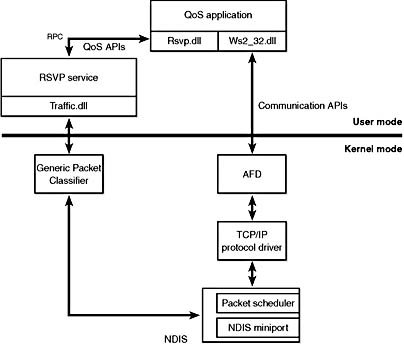 OpenSSH: A Survival Guide for Secure Shell Handling (Version 1.0)
Crystal Reports 9 on Oracle (Database Professionals)
Documenting Software Architectures: Views and Beyond
Visual C# 2005 How to Program (2nd Edition)
Lean Six Sigma for Service : How to Use Lean Speed and Six Sigma Quality to Improve Services and Transactions
GDI+ Programming with C#
Python Programming for the Absolute Beginner, 3rd Edition
flylib.com © 2008-2017.
If you may any questions please contact us: flylib@qtcs.net
Privacy policy
This website uses cookies. Click here to find out more.
Accept cookies