In the file system equivalent of a volume manager's sector sparing, NTFS dynamically replaces the cluster containing a bad sector and keeps track of the bad cluster so that it won't be reused. (Recall that NTFS maintains portability by addressing logical clusters rather than physical sectors.) NTFS performs these functions when the volume manager can't perform sector sparing. When a volume manager returns a bad-sector warning or when the hard disk driver returns a bad-sector error, NTFS allocates a new cluster to replace the one containing the bad sector. NTFS copies the data that the volume manager has recovered into the new cluster to reestablish data redundancy.

Figure 12-42 shows an MFT record for a user file with a bad cluster in one of its data runs as it exited before the cluster went bad. When it receives a bad-sector error, NTFS reassigns the cluster containing the sector to its bad-cluster file. This prevents the bad cluster from being allocated to another file. NTFS then allocates a new cluster for the file and changes the file's VCN-to-LCN mappings to point to the new cluster. This bad-cluster remapping (introduced earlier in this chapter) is illustrated in Figure 12-43. Cluster number 1357, which contains the bad sector, is replaced by a new cluster, number 1049. 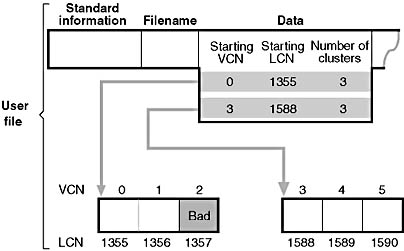 Bad-sector errors are undesirable, but when they do occur, the combination of NTFS and volume managers provides the best possible solution. If the bad sector is on a redundant volume, the volume manager recovers the data and replaces the sector if it can. If it can't replace the sector, it returns a warning to NTFS and NTFS replaces the cluster containing the bad sector.

Like the other file systems, NTFS can't recover data from a bad sector without help from a volume manager. However, NTFS greatly contains the damage a bad sector can cause. If NTFS discovers the bad sector during a read operation, it remaps the cluster the sector is in, as shown in Figure 12-43. If the volume isn't configured as a redundant volume, NTFS returns a "data read" error to the calling program. Although the data that was in that cluster is lost, the rest of the file—and the file system—remains intact; the calling program can respond appropriately to the data loss; and the bad cluster won't be reused in future allocations. If NTFS discovers the bad cluster on a write operation rather than a read, NTFS remaps the cluster before writing and thus loses no data and generates no error. 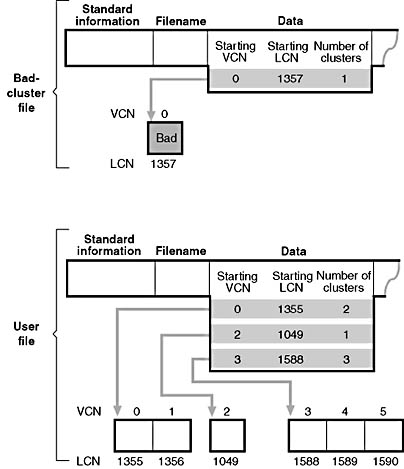 The same recovery procedures are followed if file system data is stored in a sector that goes bad. If the bad sector is on a redundant volume, NTFS replaces the cluster dynamically, using the data recovered by the volume manager. If the volume isn't redundant, the data can't be recovered and NTFS sets a bit in the volume file that indicates corruption on the volume. The NTFS Chkdsk utility checks this bit when the system is next rebooted, and if the bit is set, Chkdsk executes, fixing the file system corruption by reconstructing the NTFS metadata.

In rare instances, file system corruption can occur even on a fault tolerant disk configuration. A double error can destroy both file system data and the means to reconstruct it. If the system crashes while NTFS is writing the mirror copy of an MFT file record, of a filename index, or of the log file, for example, the mirror copy of such file system data might not be fully updated. If the system were rebooted and a bad-sector error occurred on the primary disk at exactly the same location as the incomplete write on the disk mirror, NTFS would be unable to recover the correct data from the disk mirror. NTFS implements a special scheme for detecting such corruptions in file system data. If it ever finds an inconsistency, it sets the corruption bit in the volume file, which causes Chkdsk to reconstruct the NTFS metadata when the system is next rebooted. Because file system corruption is rare on a fault tolerant disk configuration, Chkdsk is seldom needed. It is supplied as a safety precaution rather than as a first-line data recovery strategy.

The use of Chkdsk on NTFS is vastly different from its use on the FAT file system. Before writing anything to disk, FAT sets the volume's dirty bit and then resets the bit after the modification is complete. If any I/O operation is in progress when the system crashes, the dirty bit is left set and Chkdsk runs when the system is rebooted. On NTFS, Chkdsk runs only when unexpected or unreadable file system data is found and NTFS can't recover the data from a redundant volume or from redundant file system structures on a single volume. (The system boot sector is duplicated, as are the parts of the MFT required for booting the system and running the NTFS recovery procedure. This redundancy ensures that NTFS will always be able to boot and recover itself.)

Table 12-6 summarizes what happens when a sector goes bad on a disk volume formatted for one of the Windows 2000-supported file systems according to various conditions that we've described in this section.

** A fault tolerant volume is one of the following: a mirror set or a RAID-5 set.

† In a write operation, no data is lost: NTFS remaps the cluster before the write.

If the volume on which the bad sector appears is a fault tolerant volume (a mirrored or RAID-5 volume), and if the hard disk is one that supports sector sparing (and that hasn't run out of spare sectors), which file system you're using—FAT or NTFS—doesn't matter. The volume manager replaces the bad sector without the need for user or file system intervention.

If a bad sector is located on a hard disk that doesn't support sector sparing, the file system is responsible for replacing (remapping) the bad sector or—in the case of NTFS—the cluster in which the bad sector resides. The FAT file system doesn't provide sector or cluster remapping. The benefits of NTFS cluster remapping are that bad spots in a file can be fixed without harm to the file (or harm to the file system, as the case may be) and that the bad cluster won't be reallocated to the same or another file.