Making Good Use of DTE Events

Now that you have seen how to set up and trap the major events within the IDE, you may be asking what you can do with the information. In this section, you are going to add code to some of the event handlers that will allow you to provide useful features to an add-in. This will not be an exhaustive study of the events, but it should spark your thinking and cause you to look for ways to use the information provided by the events.

The WindowActivated event is raised each time a window receives focus. This gives you an opportunity to enforce a small, but significant standard. When a new class, module, or form is added to the project, the first thing that you should do is change the default name of the file from Module1, Class1, or Form1 to some more meaningful name that will describe its contents or purpose. Yet, many times in the heat of the battle, developers forget to do simple things like this. Later on, they find themselves wondering where some code is located. Giving meaningful names to files and methods, which provides developers a good head start on organizing their code, could have solved that problem.

In the WindowActivated event, I have called the CkForRemindOfDefaultName of the CReminder class. This method looks for forms, modules, and classes whose names have never been changed from the default name provided when they were initially added to the project.

Listing 11-14 shows the new code for the WindowActivated event handler. It calls a method of the Creminder class that is shown in Listing 11-17.

Figure 11-1 shows a display of the message box reminding the user to change the default name of Form1. 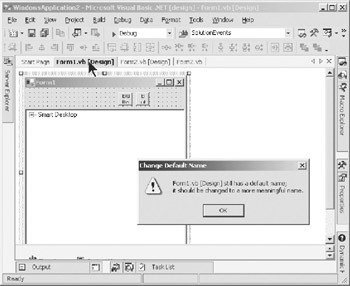 Figure 11-1: Reminding the user to change the name of Form1

When you enter a line of code into the Text Editor that will generate a compile error, a to-do item is automatically placed into the Task List.

Although I do not want to have to answer a message box, it would be nice for the Task List to automatically open and remain open to remind me to correct the problem immediately. Sometimes I may have to enter some other code before the error is cleared up. This would be the case if I enter a call to a procedure that does not yet exist. Even in this case, I may need to be reminded to code that procedure. Having the Task List automatically open to show the to-do item seems to me to be a nice touch.

I have added special code to the TaskAdded event handler. This code automatically opens the Task List when an item is added to the Task List. In addition to opening the window, I have set the AutoHides property to False. This will keep me from ignoring the error and attempting to compile the program only to find, to my surprise, that I have one or more errors. Along with the code that I have added to the TaskRemoved event handler, the window will stay open until I have corrected all of the lines with errors in them.

Listing 11-15 shows the code for the new ItemAdded event of the TaskListEvents object.

Listing 11-16 shows the new code for the ItemRemoved event of the TaskListEvents object. This code calls the CkForClosingTaskList method of the CReminder class. That method checks the count of items in the Task List, and if it is zero, it automatically hides the Task List window. 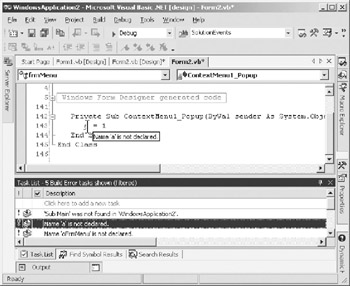 I have created a new class called the CReminder class. Initially it contains only three public methods that perform the functions described in the two previous sections. However, this class provides the container for other methods and functionality that you can add as you think through some of the features that you would like to trigger upon the occurrence of a DTE event. Listing 11-17 shows the code for this class.