Figure 10-1 summarizes the roles of a ChannelDispatcher. 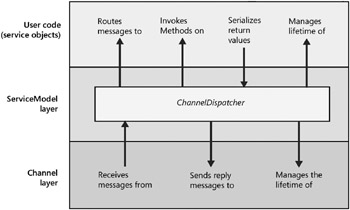 Figure 10-1: The roles of a ChannelDispatcher object 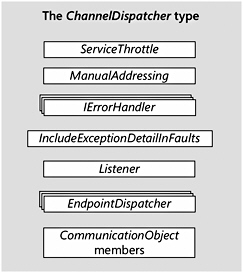 ChannelDispatcher objects swallow exceptions. Because the ChannelDispatcher is near the top of the stack in a receving application, it is able to swallow exceptions from channel listeners, channels, service objects, and behaviors. This is good news if you want your application to stay “up” no matter what. In my view, this approach is like propping up a fighter with a harness in a boxing ring. With the extra help of the harness, the fighter is sure to never lose his or her footing. With this sort of rig, I might even be able to make it to the end of a round with a heavyweight champion (more than likely not, though). Sometimes, however, it is entirely appropriate to lose your footing in a boxing ring. Staying upright when you should be lying on the mat is dangerous.

I believe that if an application throws an exception and that exception is not handled, the application should crash. I don’t view this sort of behavior as a bug, but rather as some circumstance that the developers and architects did not envision, and the application can account for that circumstance in a patch or future release. If as a boxer I keep getting knocked out, either I should reevaluate my career or I should train differently. All too often, developers catch and swallow all exceptions “to keep the application from crashing” when they should really be writing better code. In my view, catching and swallowing exceptions is untenable because it casts too wide a net around what the application can recover from. At a minimum, exceptions that are swallowed should be logged to the Windows Event Log by default. Luckily, we are not stuck with this behavior, because a ChannelDispatcher object can define its own error handling characteristics via the ErrorHandlers collection. All objects in this collection implement the IErrorHandler interface. The IErrorHandler interface defines HandleError and ProvideFault methods. The ProvideFault method is used to specify the fault sent to the other messaging participant. The HandleError method is where you can specify what you want to happen (for example, Environment.FailFast) as a result of an exception thrown elsewhere in the application. If HandleError returns true, the other IErrorHandler.HandleError methods are not called.

The AddressFilter and ContractFilter properties available on the EndpointDispatcher type derive from the System.ServiceModel.Dispatcher.MessageFilter abstract type. The MessageFilter type defines two Match methods and a CreateFilterTable method. The Match methods accept either a Message or a MessageBuffer as an argument and return a Boolean indicating whether the contents of the Message or MessageBuffer match predefined criteria. 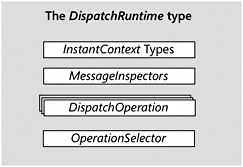 The MessageInspectors property on the DispatchRuntime type returns a collection of types that implement the IDispatchMessageInspector interface. This interface defines two methods: AfterReceiveRequest and BeforeSendReply. The AfterReceiveRequest method allows the type to inspect the message after the request is received but before it is sent to the operation, and the BeforeSendReply allows the type to inspect the reply message before it is sent to the channel layer. The objects in the collection returned from the MessageInspectors property see all of the Message objects for the service.

Once the OperationSelector property returns a String, that String is used to look up the DispatchOperation associated with that String. This is done via the Operations property on the DispatchRuntime type. The Operations property returns a dictionary of DispatchOperation objects, and the key in this dictionary is, by default, the value of the Action header block associated with that operation. The value of the key in the dictionary can come from the contract (OperationContract.Action property), but it can also be set manually in code. By default, the values of the Action property on the OperationContract annotation appear as keys in this dictionary.

Once the node is found from the key, the value part of the dictionary is of type DispatchOperation. The DispatchOperation type deserializes method parameters from received Message objects, invokes a method on the service object, and serializes the return value from a service object method into a reply Message. The DispatchOperation deserializes received Message objects and serializes reply Message objects via the Formatter property. This property returns a type that implements the IDispatchMessageFormatter interface. The IDispatchMessageFormatter interface defines two methods: DeserializeRequest and SerializeReply. The DeserializeRequest method accepts a Message argument and populates an array of objects. The SerializeReply method accepts arguments of type MessageVersion, Object[], and Object, and it returns a Message. The MessageVersion argument is used during the construction of the Message, and the Object argument is used to serialize the body of the Message. The Object[] argument consists of the parameters that were originally passed to the service object method.