Channels can perform a variety of functions. Virtually any type of messaging functionality can be written into a channel and plugged into the WCF runtime. We can, however, broadly categorize the types of tasks that a channel can perform. At the conceptual level, a channel can facilitate the use of a particular transport, messaging protocol, or channel shape.

While TCP/IP, HTTP, Named Pipes, and MSMQ represent the mainstream transports in use today, applications might require additional transports. Although the possibilities abound, some candidates are file system, Simple Mail Transfer Protocol (SMTP), Post Office Protocol 3 (POP3), and File Transfer Protocol (FTP). If one thinks a little outside the box, it is not too hard to conceive of other transports as well. Consider the SQL Server 2005 Service Broker. Although this is not a standard transport, treating it as such by creating a WCF transport channel provides WCF applications access to its features through the standard WCF programming model. With a Service Broker custom channel in place, application developers could leverage the Service Broker just as easily as they could leverage WS-* over HTTP. In effect, this type of custom transport channel allows the application developer to focus more on the business functionality of the application rather than the Service Broker access points or API. The same concept beneath writing a custom transport channel for the SQL Server 2005 Service Broker also applies to other enterprise computing applications like SAP and Oracle.

Protocol channels are the means by which WCF implements messaging protocols like WS-ReliableMessaging, WS-AtomicTransaction, and WS-SecureConversation. In fact, all WS-* specifications supported by WCF are implemented as protocol channels. Since WS-* specifications frequently dictate that one application-level message exchange can actually generate more than one message at the transport layer, WS-* protocol channels frequently generate messages that are not surfaced to any higher channel in the channel stack. For example, consider the channel stack shown in Figure 6-3. 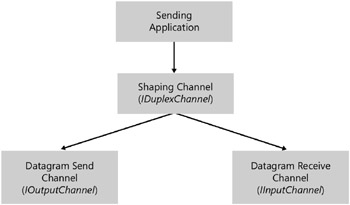