WCF Gross Anatomy from the Inside

When examining the outside of a WCF application (the address, binding, and contract), it is natural to wonder how WCF uses addresses, bindings, and contracts to send or receive messages. From the code we have seen so far, there has been little code directly related to sending and receiving messages. In fact, an address, a binding, and a contract do little on their own. When we take a closer look at a WCF application, we see another infrastructure that uses addresses, bindings, and contracts to send and receive messages. In large measure, the rest of this book is dedicated to explaining this infrastructure, so I will introduce only the major parts of the infrastructure in this chapter.

Figure 4-2 illustrates how the ServiceModel layer and the Channel layer fit together.

Figure 4-2: The ServiceModel layer and the Channel layer

Notice that the ServiceModel layer is called the Proxy (also called the Client) on the sender and the Dispatcher on the receiver. The Proxy and the Dispatcher have different roles, even though they are part of the same architectural layer. The Proxy is responsible for, among other things, creating messages to send to the Channel layer. The Dispatcher, on the other hand, is responsible for deserializing received messages, instantiating an object, and dispatching the deserialized message contents to that object. Both the Proxy and the Dispatcher serve more functions than these, and we will describe their roles more in Chapter 10. 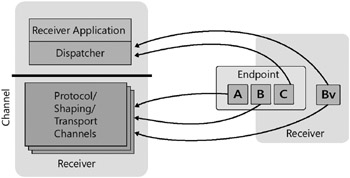 Figure 4-3: How the ABCs of WCF influence the ServiceModel layer and the Channel layer