Both UMDF and KMDF use reference counts in controlling object lifetime. Every object has a reference count, which ensures that the object persists as long as it is being used:

In addition to a reference count, every framework object-except the driver object-is assigned a parent at creation. The driver object is the root object, and all other objects are its descendants. Device objects are always the children of the driver object, and queues are generally the children of device objects, although a queue can be a later descendant. The framework builds and maintains an internal object tree based on these relationships. Figure 5-2 shows a simple example of an object tree. 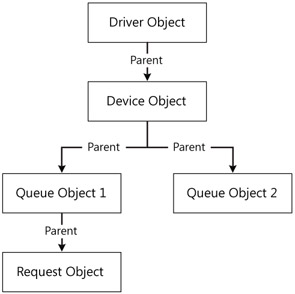 Drivers do not typically take out references on the objects that they create, but in some cases such references are necessary to ensure that the object's handle remains valid. For example, a driver that sends an asynchronous I/O request might take out a reference on the request object to help prevent race conditions during cancellation. Before the request object can be deleted, the driver must release this reference. The driver must implement an object cleanup callback to release such a reference. See "Cleanup Callbacks" later in this chapter for more information.

The terms "deletion," "disposal," "cleanup," and "destruction" can sometimes be confusing. When a driver calls the framework to delete an object, the framework starts a sequence that eventually results in the destruction of the object. The first step is to dispose of the object's children by calling their cleanup callbacks. This step starts with the generation that is farthest from the parent in the object hierarchy and occurs in strict hierarchical order.

References can remain on a child or on the parent after disposal is complete. After the last reference has been removed for any of the disposed objects, the framework calls the object's deletion callback and then destroys the object.

Figure 5-3 shows the parent-child relationships among the UMDF objects. 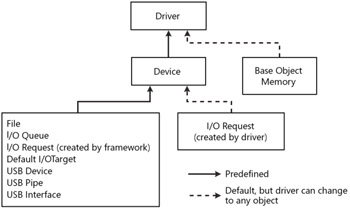 UMDF follows the COM rules for taking references. Accordingly, every time a UMDF method returns an interface pointer as an output parameter, the framework takes a reference on the interface. The driver must release this reference by calling Release when it has finished using the pointer.

Driver code can use the AddRef and Release methods of IUnknown to increment and decrement an object's reference count, but usually this is unnecessary. However, if a driver does take a reference on a framework object, the driver must implement the IObjectCleanup::OnCleanup interface on the corresponding callback object to remove that reference so that the framework can eventually delete the object. The framework calls this method when the object is deleted.

COM programmers are probably already familiar with circular references, where two objects hold references on each other. Although each object releases its reference on the other object when its own reference count reaches zero, neither object can be deleted on its own. An external event must force one of the two objects to drop its reference on the other, thus breaking the circular reference and allowing both objects to delete themselves. This is the main purpose of the OnCleanup callback.

Chapter 18, "An Introduction to COM," provides a detailed explanation of when to use the AddRef and Release methods.

For KMDF drivers, the driver object is the root object-all other objects are considered its children. For some object types, a driver can specify the parent when it creates the object. If the driver does not specify a parent at object creation, the framework sets the default parent to the driver object. 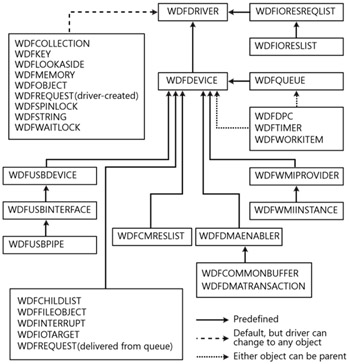 KMDF maintains an implicit reference count for each object and ensures that the object persists until all references to it have been released. If the driver explicitly deletes an object by calling a deletion method, KMDF marks the object for deletion but does not actually free the memory for the object until after its reference count reaches zero.

Either of the following actions can trigger object deletion:

If your driver owns an object, the driver should explicitly delete the object when the object is no longer required. When the driver calls a deletion method, the framework:

If the driver does not explicitly delete an object, the framework deletes the object when the object's parent is deleted.

A driver must not call a deletion method on an object that the framework controls:

UMDF  UMDF drivers support a cleanup callback by implementing the IObjectCleanup interface on a callback object. This interface has one method: OnCleanup. The framework calls OnCleanup as part of the object destruction sequence before it releases the callback object.

A driver can implement a destroy callback for an object in addition to-or instead of-a cleanup callback.

A driver-created I/O request is the most common object that a UMDF driver might explicitly delete. The Fx2_Driver, for example, creates and sends I/O requests and then deletes the request object in its I/O completion callback. Listing 5-3 shows how the driver calls IWDFObject::DeleteWdfObject from its IWDFRequestCallbackRequestCompletion::OnCompletion method in the Device.cpp file.

Listing 5-3: Deleting an object in a UMDF driver

When a KMDF object is deleted, all of the object's descendants are also deleted. Object deletion starts from the descendant farthest from the object and works up the object hierarchy toward the root until it reaches the object itself.

In the interest of clarity, assume that the object being deleted is YourObject. The framework takes the following steps to delete YourObject:

On Implementing Object Cleanup and Deletion in KMDF

At first, implementing the object deletion pattern described in this chapter appeared to be a simple task, but in reality it turned out to be surprisingly complex. When you take a step back and look at the pattern, you see that deletion is a state transaction that involves multiple objects. Any object can be in the middle of the same transaction that you are initiating for one of its ancestors, such as deleting a parent object in one thread and a descendant object in another thread. Every object must be able to go from the created state to the disposing state and must deal with race conditions. For example, the framework can simultaneously dispose of an object and its parent or the client driver can explicitly delete an object at the same time that the framework is deleting the object's parent and thus implicitly deleting the object as well.

As with many problems in the framework, we solved this by implementing a simple state machine and formalizing the different inputs that affect an object's lifetime. At that point, we knew how to dispose of a tree, but we still had to figure out when disposal was complete. The goal was to make handling device removal and shutdown as easy as possible for a KMDF driver, without the synchronization that is usually required in WDM drivers. In KMDF, object disposal had to occur at the device object level, so that the framework could guarantee that all of the device object's children were destroyed before the device object itself and that all of the driver-global objects were destroyed before the driver object. We solved this problem by placing each object on a device-specific or driver-global "dispose list." The framework checks the list to ensure that objects are destroyed at the right time.-Doron Holan, Windows Driver Foundation Team, Microsoft

If your driver relies on the framework's object hierarchy to handle the deletion of child objects, you are guaranteed that the parent object still exists when the child's EvtCleanupCallback routine runs, except as described below. If the driver explicitly deletes an object by calling WdfObjectDelete, however, you cannot assume that the parent still exists.

An object requires cleanup at PASSIVE_LEVEL if it must wait for something to complete or if it accesses paged memory. If the driver attempts to delete such an object-or the parent of such an object-at DISPATCH_LEVEL, KMDF defers the disposal of the entire tree and queues all of the cleanup callbacks to a work item for later processing at PASSIVE_LEVEL. Thus, after the cleanup callbacks for all of the children have run, the cleanup callback for the parent runs. Currently, KMDF maintains one work item queue for each device object and calls the EvtCleanupCallback routines for the device object and its children through this queue as required.

Consider what happens when a driver completes an I/O request that has a child timer object. According to the contract for an I/O request object, KMDF calls the request object's EvtCleanupCallback while the pointer to the underlying WDM IRP is still valid and accessible. For performance reasons, KMDF must complete the IRP as soon as possible. As soon as the IRP is complete, however, the IRP pointer is no longer valid. Instead of waiting to complete the IRP after the EvtCleanupCallback routines have run at PASSIVE_LEVEL, KMDF queues the timer's cleanup callback to a work item and then completes the IRP. The EvtCleanupCallback for the timer therefore might run after the request has been completed, the IRP pointer has been freed, and the request object has been deleted.

To avoid any problems that might result from this behavior, drivers should not set the I/O request object as the parent of any object that requires cleanup at PASSIVE_LEVEL.

The framework makes no guarantees about the IRQL at which it calls an object's EvtDestroyCallback.

The example in Listing 5-4 shows a simple example of object deletion from the Echo sample's Driver.c file.

In this example, the Echo sample driver creates a string object to pass to a method that retrieves the driver version. After the driver has finished using the object, the driver calls WdfObjectDelete.