By default, PREfast analyzes code according to rules for kernel-mode drivers. To analyze a user-mode driver, set the analysis mode to __user_driver, as described in "How to Specify the PREfast Analysis Mode" later in this chapter, or simply ignore any kernel-specific warnings.

This section provides a brief introduction to the PREfast command line and PREfast defect log viewer. If you are already familiar with using PREfast, you might prefer to skip this section.

Note  Take full advantage of the compiler's error-checking capabilities by compiling code with the /W4 and /WX compiler switches, in addition to using PREfast. PREfast does not enable the /W4 switch, although there is some overlap between errors that /W4 detects and errors that PREfast detects. Most of these errors are uninitialized variables.

How to Specify the PREfast Analysis Mode

The analysis mode can be one of the following annotations:

If the __kernel_driver analysis mode is incorrect for a particular driver, insert the appropriate analysis mode annotation in the source file or appropriate header file just after the relevant header is included and before any function bodies. Ntddk.h and Wdm.h include driverspecs.h, so this annotation can appear anywhere after Ntddk.h or Wdm.h is included.

To run PREfast in a build environment window, type prefast, followed by your usual build command.

When you execute a prefast command, PREfast intercepts the call to the compiler, analyzes the code to be compiled, and writes the results of the analysis to a log file in XML format. PREfast operates separately on each function in the source code. It produces a single combined log for all of the files that are checked in a single run and eliminates duplicate errors and warnings that header files generate. PREfast then calls the regular compiler to produce the usual build output. The resulting object files are the same as those produced by your usual build command.

How to Build the PREfast Examples

PREfast is installed with a directory of source code examples that contain deliberate errors to trigger various PREfast warnings. You can use the PREfast examples to validate your PREfast installation and to experiment with the PREfast defect log viewer. The \fail_driver subdirectory contains driver source code that illustrates driver-specific rules in more depth.

For comparison to code that triggers warnings, the Boundsexamples.cpp example file contains several functions that do not contain errors and so do not trigger any PREfast warnings. Look in the source code for functions with "_ok" in the function name.

To Build the PREfast Examples

How to Display PREfast Results

You can display the results of the PREfast analysis in one of the following ways:

The PREfast defect log viewer provides a graphical user interface that you can use to review PREfast output, to filter output so you can show or hide particular messages, and to view annotated source code so you can see the analysis path that produced a given warning.

To Display PREfast Results in the PREfast Defect Log Viewer

Figure 23-1 shows with the unfiltered PREfast results of building the examples in the Message List screen. The version number at the top of the screen indicates the version of PREfast that displays the log. 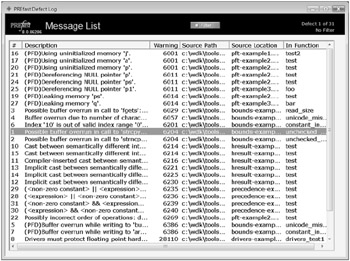 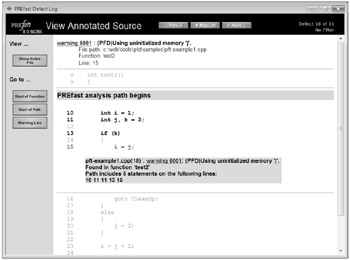 In the View Annotated Source screen, you can:

In the Message List screen in filter view, you can:

You can also double-click a message to display the View Annotated Code screen for that message, just as you can when filters are not visible.

Filtering results does not prevent PREfast from finding errors-it simplifies the list of results in the PREfast viewer so you can work with them more effectively. After you fix the errors shown in the filtered results, you should always run PREfast again and change the way in which results are filtered, so you can see and fix other, less critical errors.

The PREfast drivers_recommended filter displays messages for serious errors in both general-purpose code and driver code. These messages identify errors that tend to be genuine rather than messages that might not represent actual errors in code, which are often referred to as false positives or "noise." The drivers_only filter displays messages only for errors that apply specifically to drivers. If you have a limited amount of time to fix errors that PREfast detects in your driver, use one of these predefined filters and concentrate on fixing the errors that they display.

You might want to hide individual messages for several reasons: you or your development team might think that the risk associated with a message is acceptably low or the noise is unacceptably high, your product ship cycle might allow fixing only the most critical errors, or the messages simply might be irrelevant to your project.

To hide an individual message, clear its check box in the message filter pane as described in Figure 23-3, "PREfast Message List Screen in filtered view."

You can use the prefast list command to display the contents of the PREfast defect log as text output in the build environment command window. This command is useful if you need only a short list of errors and do not need access to annotated source code-for example, to see the effect of fixing errors that PREfast found in a previous run. The prefast list output consists of the same information that is shown in the PREfast defect log viewer, in a form suitable for pasting into files or bug reports.

The example in Listing 23-2 shows text output for the first few messages from building the PREfast examples.

This section shows a few simple code examples and describes solutions for common errors that PREfast can detect in source code. These examples are shown without source code annotations, so you can see what PREfast detects in unannotated code.

This function declares several variables but does not initialize them, and the function fails to branch appropriately. In this particular code path, the test at line 17 fails because the a variable is not initialized, which is reported in another warning message that is not shown in Figure 23-4. Line 19 therefore fails to execute, leaving the p variable uninitialized.

Although p is tested at line 26, no code handles the case in which the test fails, so execution continues at line 31, which dereferences p and triggers a PREfast warning that p could be NULL. A NULL pointer can also trigger warnings about uninitialized variables, as it does for p in this function. To eliminate this warning, you would add logic to prevent dereferencing p if it happens to be NULL.

According to the rules of operator precedence in C, the (a & b == c) expression is interpreted as (a & (b == c)) because the == logical equals operator has higher precedence than bitwise AND (&). Therefore, this function compares b with c and then masks the result with a, which tests whether a is even or odd. If this is the intended result, the function is correct as written, but parentheses would help to make the programmer's intention more clear, as would a comment in the code.

If the programmer intended to mask a with b and compare the result with c, the function is incorrect. Parentheses are required to force evaluation of the as ((a & b) == c) expression.

The IRQL at which a driver function runs determines which kernel-mode functions it can call and whether it can access paged memory, use kernel-dispatcher objects, or take other actions that might cause a page fault. For example, some DDI functions require that the caller be running at DISPATCH_LEVEL, whereas others cannot be called safely if the caller is running at any IRQL higher than PASSIVE_LEVEL.

Many of the DDI functions that drivers must call are affected by IRQL, sometimes in subtle ways. For example, if your driver sets a flag on the basis of a string and the flag is in a data structure that needs protected access, you might be tempted to write code that resembles the example shown in Figure 23-6. In this example, calling ExAcquireFastMutex resets the current IRQL to APC_LEVEL before acquiring the mutex. However, RtlCompareUnicodeString should be called at PASSIVE_LEVEL, so PREfast displays a warning.

Note the "IRQL was last set to 1 on line 14" statement. It is easy to see this in a brief example, but this information might prove to be very important in a longer, more complex function body.

The solution is to move the RtlCompareUnicodeString call before ExAcquireFastMutex and then to test the result after acquiring the mutex. The corrected code would appear as shown in Listing 23-3.

PREfast often reports a valid error in one location that is actually caused by code in another location. Calling a function at an incorrect IRQL is a good example. When PREfast analyzes a code path, it attempts to infer the range of IRQL at which a function could be running and identify any inconsistencies, as this example shows. PREfast proceeds as if the programmer specifically intended each change to the IRQL. If the IRQL is incorrect for a subsequent function call, PREfast warns about the function call, and not about the earlier change in the IRQL.

When PREfast starts to analyze the Y function, the call to KeAcquireSpinLockAtDpcLevel causes PREfast to assume that the code should be executing at DISPATCH_LEVEL and therefore to issue a warning that KeDelayExecutionThread is being called at an IRQL that is too high, as shown in Figure 23-7:

As PREfast continues to analyze the Y function, it now assumes that the code should be executing at APC_LEVEL because of the call to KeDelayExecutionThread. PREfast then encounters KeReleaseSpinLockFromDpcLevel, which must be called at DISPATCH_LEVEL, and so it issues the following warning that the function is being called at an IRQL that is too low:

To correct this situation, consider one of the following solutions in your code:

This warning indicates that an assignment to a pointer for a particular function pointer did not match the expected type. An example might be an attempt to assign a Cancel routine to a StartIo function pointer, which the C compiler allows but PREfast does not. Typically, the assignment is correct, but the function is not known to be of any specific function class.

Figure 23-8 shows an example of this error.

To fix this error, you would add DRIVER_CANCEL MyCancel; before line 2124 to instruct PREfast that the MyCancel function is a cancel routine. This suppresses Warning 28155 and causes PREfast to check that the function meets the requirements of a cancel routine.

PREfast issues the same warning for the argument Executive because it is not of the KPROCESSOR_MODE type.

The enumeration values most commonly passed in a KeWaitXxx call are KWAIT_REASON Executive and KPROCESSOR_MODE KernelMode. Both of these values evaluate to zero, so they are numerically interchangeable. If the driver code transposes them in the function call, a type mismatch occurs for each parameter but, without strict type checking, the mismatch is invisible to the compiler. If the values are Executive and KernelMode, the mismatch is also invisible to the system.

Problems arise when these parameters are transposed with enumeration values that are not numerically interchangeable, such as Executive and UserMode, thus causing the driver to wait in a mode that the programmer did not intend.

This example shows how PREfast can help to prevent a bug when it is used early in the development process. If the values that are incorrectly interchanged are nonzero, this coding error will appear as a bug at some time in testing. Some variations of this coding error can cause the bug to appear as a bug check in the kernel or in an unrelated driver, making the bug very difficult to recognize and especially difficult to find in your driver. PREfast detects this bug, which saves testing and debugging time that would be needed to find the problem. Fixing the bug takes only a moment because the PREfast warning is specific and flags the error close to where it occurs in your code.