For over a hundred years , telephone networks were exclusively circuit-switched. What this meant was that for every telephone call made, a dedicated connection was established between the two endpoints, with a fixed amount of bandwidth allocated to that circuit. Creating such a network was costly, and where distance was concerned , using that network was costly as well. Although we are all predicting the end of the circuit-switched network, many people still use it every day, and it really does work rather well. 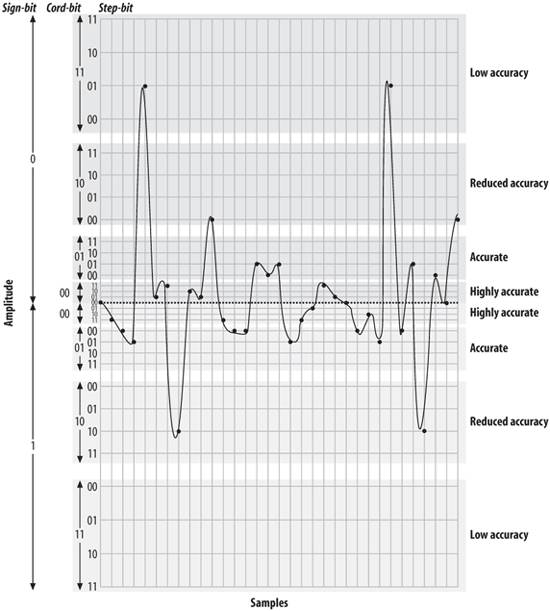 In the PSTN, there are many different sizes of circuits serving the various needs of the network. Between the central office and a subscriber, one or more analog circuits , or a few dozen channels delivered over a digital circuit, generally suffice. Between PSTN offices (and with larger customers), fiber- optic circuits are generally used.

Since the standard method of digitizing a telephone call is to record an 8-bit sample 8,000 times per second, we can see that a PCM-encoded telephone circuit will need a bandwidth of 64,000 bps. This 64-kbps channel is referred to as a DS-0 (that's Dee-Ess-Zero). The DS-0 is the fundamental building block of all digital telecommunications circuits.

Even the ubiquitous analog circuit is sampled into a DS-0 as soon as possible. Sometimes this happens where your circuit terminates at the central office, and sometimes well before.

The venerable T-1 is one of the more recognized digital telephony terms. A T-1 is a digital circuit consisting of 24 DS-0s multiplexed together into a 1.544-Mbps bit stream. [*] This bit stream is properly defined as a DS-1 . Voice is encoded on a T-1 using the m -law companding algorithm.


The various other T- carriers (T-2, T-3, and T-4) are multiples of the T-1, each based on the humble DS-0. Table 7-2 illustrates the relationships between the different T-carrier circuits .


At densities above T-3, it is very uncommon to see a T-carrier circuit. For these speeds, optical carrier (OC) circuits may be used.

The Synchronous Optical Network (SONET) was developed out of a desire to take the T-carrier system to the next technological level: fiber optics. SONET is based on the bandwidth of a T-3 (44.736Mbps), with a slight overhead making it 51.84 Mbps. This is referred to as an OC-1 or STS-1 . As Table 7-3 shows, all higher-speed OC circuits are multiples of this base rate.


SONET was created in an effort to standardize optical circuits, but due to its high cost, coupled with the value offered by many newer schemes, such as Dense Wave Division Multiplexing (DWDM), there is some controversy surrounding its future.

As with any circuit, it is not enough for the circuits used in the PSTN to just carry (voice) data between endpoints. Mechanisms must also be provided to pass information about the state of the channel between each endpoint. (Disconnect and answer supervision are two examples of basic signaling that might need to take place; Caller ID is an example of a more complex form of signaling.)

Also known as robbed-bit signaling, CAS is what you will use to transmit voice on a T-1 when ISDN is not available. Rather than taking advantage of the power of the digital circuit, CAS simulates analog channels. CAS signaling works by stealing bits from the audio stream for signaling purposes. Although the effect on audio quality is not really noticeable, the lack of a powerful signaling channel limits your flexibility.

When configuring a CAS T-1, the signaling options at each end must match. E&M (Ear & Mouth or recEive & transMit) signaling is generally preferred, as it offers the best supervision.

CAS is very rarely used on PSTN circuits anymore, due to the superiority of ISDN-PRI. One of the limitations of CAS is that it does not allow the dynamic assignment of channels to different functions. Also, Caller ID information (which may not even be supported) has to be sent as part of the audio stream. CAS is commonly used on the T-1 link in channel banks, although PRI is sometimes available (and preferable).

The Integrated Services Digital Network (ISDN ) has been around for over 20 years. Because it separates the channels that carry the traffic (the bearer channels, or B-channels) from the channel that carries the signaling information (the D-channel), ISDN allows for the delivery of a much richer set of features than CAS. In the beginning, ISDN promised to deliver much the same sort of functionality that the Internet has given us, including advanced capabilities for voice, video, and data transfer.

Unfortunately, rather than ratifying a standard and sticking to it, the respective telecommunications manufacturers all decided to add their own tweaks to the protocol, in the belief that their versions were superior and would eventually dominate the market. As a result, getting two ISDN-compliant systems to connect to each other was often a painful and expensive task. The carriers who had to implement and support this expensive technology in turn priced it so that it was not rapidly adopted. Currently, ISDN is rarely used for much more than basic trunkingin fact, the acronym ISDN has become a joke in the industry: "It Still Does Nothing."

Having said that, ISDN has become quite popular for trunking, and it is now (mostly) standards-compliant. If you have a PBX with more than a dozen lines connected to the PSTN, there's a very good chance that you'll be running an ISDN-PRI circuit. Also, in places where DSL and cable access to the Internet are not available (or too expensive), an ISDN-BRI circuit might provide you with an affordable 128-kbps connection. In much of North America, the use of ISDN -BRI for Internet connectivity has been deprecated in favor of DSL and cable modems, but it's still very popular in other parts of the world.

Basic Rate Interface (or Basic Rate Access) is the flavor of ISDN designed to service small endpoints such as workstations.

The BRI flavor of the ISDN specification is often referred to simply as "ISDN," but this can be a source of confusion, as ISDN is a protocol, not a type of circuit (not to mention that PRI circuits are also correctly referred to as ISDN!).

A Basic Rate ISDN circuit consists of two 64-kbps B-channels controlled by a 16-kbps D-channel, for a total of 144 kbps.

Basic Rate ISDN has been a source of much confusion during its life, due to problems with standards compliance, technical complexity, and poor documentation. Still, in European countries ISDN-BRI circuits remain quite a popular way of connecting to the PSTN.

The Primary Rate Interface (or Primary Rate Access) flavor of ISDN is used to provide ISDN service over larger network connections. A Primary Rate ISDN circuit uses a single DS-0 channel as a signaling link (the D-channel); the remaining channels serve as B-channels.

In North America, Primary Rate ISDN is commonly carried on one or more T-1 circuits. Since a T-1 has 24 channels, a North American PRI circuit typically consists of 23 B-channels and 1 D-channel. For this reason, PRI is often referred to as 23B+D. [*]

[*] PRI is actually quite a bit more flexible than that, as it is possible to span a single PRI circuit across multiple T-1 spans . This can give rise, for example, to a 47B+D circuit (where a single D-channel serves two T-1s) or a 46B+2D circuit (where primary and backup D-channels serve a pair of T-1s). You will sometimes see PRI described as nB+nD, because the number of B- and D-channels is, in fact, quite variable.


Primary Rate ISDN is very popular, due to its technical benefits and generally competitive pricing. If you believe you will require more than a dozen or so PSTN lines, you should look into Primary Rate ISDN pricing.

From a technical perspective, ISDN-PRI is always preferable to CAS.

SS7 is the signaling system used by carriers. It is conceptually similar to ISDN, and it is instrumental in providing a mechanism for the carriers to transmit the additional information ISDN endpoints typically need to pass. However, the technology of SS7 is different from that of ISDNone big difference is that SS7 runs on a completely separate network from the actual trunks that carry the calls.

SS7 support in Asterisk is on the horizon, as there is much interest in making Asterisk compatible with the carrier networks. An open source version of SS7 (http://www.openss7.org) exists, but work is still needed for full SS7 compliance, and as of this writing it is not known whether this will be integrated with Asterisk. Another promising source of SS7 support comes from Sangoma Technologies, who offer SS7 functionality in many of their products.

It should be noted that adding support for SS7 in Asterisk is not going to be as simple as writing a proper driver. Connecting equipment to an SS7 network will not be possible without that equipment having passed an extremely rigorous certification processes. Even then, it seems doubtful that any traditional carrier is going to be in a hurry to allow such a thing to happen.

Practical Asterisk 1.4 and 1.6: From Beginner to Expert