This lesson offers an introduction to protocols and their function in a networking environment. It explains the roles of protocols in network communications and describes how different protocols work at different OSI levels.

The Function of Protocols

Protocols are rules and procedures for communicating. The term "protocol" is used in a variety of contexts. For example, diplomats from one country adhere to rules of protocol designed to help them interact smoothly with diplomats from other countries. Rules of protocol apply in the same way in the computer environment. When several computers are networked, the rules and technical procedures governing their communication and interaction are called protocols.

Keep three points in mind when you think about protocols in a network environment:

The entire technical operation by which data is transmitted over the network has to be broken down into discrete, systematic steps. At each step, certain actions take place that cannot take place at any other step. Each step includes its own rules and procedures, or protocol.

Protocols at the sending computer:

Protocols at the receiving computer carry out the same series of steps in reverse order. They:

Both sending and receiving computers need to perform each step in the same way so that the data will have the same structure when it is received as it did when it was sent.

For example, two different protocols might each break data into packets and add on various sequencing, timing, and error-checking information, but each will do it differently. Therefore, a computer using one of these protocols will not be able to communicate successfully with a computer that is using the other protocol.

Until the mid-1980s, most local area networks (LANs) were isolated. A LAN served a single department or company and was rarely connected to any larger environments. As LAN technology matured, however, and the data communication needs of businesses expanded, LANs evolved, becoming components in larger data communication networks in which LANs talked to each other.

Data that is sent from one LAN to another along any of several available paths is said to be routed. The protocols that support multipath LAN-to-LAN communications are known as routable protocols. Because routable protocols can be used to tie several LANs together and create new wide-area environments, they are becoming increasingly important.

Protocols in a Layered Architecture

In a network, several protocols have to work together. By working together, they ensure that the data is properly prepared, transferred to the right destination, received, and acted upon.

The work of the various protocols must be coordinated so that no conflicts or incomplete operations take place. The results of this coordination effort are known as layering.

Figure 6.1 The OSI reference model showing the layers of protocols

The lower layers in the OSI reference model specify how manufacturers can make their equipment connect to equipment from other manufacturers, for example, by using NICs from several manufacturers on the same LAN. As long as they operate with the same protocols, they are able to send and receive data from each other. The upper layers specify rules for conducting communications sessions (the time during which two computers maintain a connection) and the interpretation of applications. The higher they are in the stack, the more sophisticated the tasks and their associated protocols become.

The binding process—the process by which protocols become connected to each other and the NIC—allows a great deal of flexibility in setting up a network. Protocols and NICs can be mixed and matched on an as-needed basis. For example, two protocol stacks, such as Internetwork Packet Exchange and Sequenced Packet Exchange (IPX/SPX), discussed in Lesson 3: NetWare Protocols, and Transmission Control Protocol/Internet Protocol (TCP/IP), discussed in Lesson 2: TCP/IP, can be bound to one NIC. If there is more than one NIC in the computer, one protocol stack can be bound to either or both NICs.

The binding process consists of more than just binding the protocol stack to the NIC. Protocol stacks need to be bound or associated with the components above and below them so that data can proceed smoothly through the stack during execution. For example, TCP/IP may be bound to the Network Basic Input/Output System (NetBIOS) session layer above as well as to the NIC driver below it. The NIC driver is also bound to the NIC.

The computer industry has designated several kinds of stacks as standard protocol models. Hardware and software manufacturers can develop their products to meet any one or a combination of these protocols. The most important models include:

Protocols exist at each layer of these stacks, performing the tasks specified by that layer. However, the communication tasks that networks need to perform are grouped into one of three protocol types. Each type is comprised of one or more layers of the OSI. As shown in Figure 6.2, these three protocol types map roughly to layers of the OSI reference model (application, transport, and network).

NOTE Many protocols were written long before the OSI reference model came into common use. Thus, it is not uncommon to find protocol stacks that do not map directly to the OSI model. 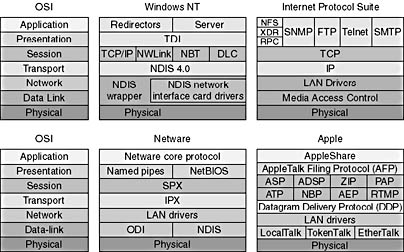 The ISO, the Institute of Electrical and Electronic Engineers (IEEE), ANSI (American National Standards Institute), CCITT (Comité Consultatif Internationale de Télégraphie et Téléphonie), now called the ITU (International Telecommunications Union), and other standards bodies have developed protocols that map to some of the layers in the OSI reference model.

The IEEE protocols at the physical layer are:

The IEEE has further defined these protocols to facilitate communications activity at the Media Access Control (MAC) sublayer.

A MAC driver is located at the Media Access Control sublayer; this device driver is also known as the NIC driver. It provides low-level access to network adapters by providing data-transmission support and some basic adapter management functions.

A MAC protocol determines which computer can use the network cable when several computers try to use it simultaneously. CSMA/CD, the 802.3 protocol, allows computers to transmit data when no other computer is transmitting. If two hosts transmit simultaneously, a collision occurs. The protocol detects the collision and halts all transmission until the wire is clear. Then, each computer can begin to transmit again after waiting a random period of time.

Protocols are implemented and removed in much the same way that drivers are added and removed. Essential protocols are installed automatically at the same time the initial operating system is installed on the computer. To install protocols such as NWLink after the initial installation, the network operating system usually includes a utility that leads the administrator through the process. For example, a network operating system setup program might provide a series of graphical windows that lead the administrator through the process of:

Exercise 6.1 (a): Matching the OSI Model Rules to Layers

This exercise is designed to help you reinforce your understanding of network protocol stacks. The following table contains two columns. In the left column are listed the seven layers of the OSI reference model. In the right column, enter the rule that applies to the layer on the left.

Exercise 6.1 (b): Matching the OSI Model Layers with Communication Tasks

The three groups are: