With Windows 2000, a DHCP server can enable dynamic updates in the DNS name space for any of its clients that support these updates. Scope clients can then use DNS dynamic update protocol to update their host name-to-address mapping information (which is stored in zones on the DNS server) whenever changes occur to their DHCP-assigned address. In this lesson, you learn how to integrate DHCP with DNS.

Although DHCP provides a powerful mechanism for automatically configuring client IP addresses, until recently DHCP did not notify the DNS service to update the DNS records on the client—specifically, to update the client name to an IP address and the IP address-to-name mappings maintained by a DNS server. Without a way for DHCP to interact with DNS, the information maintained by DNS for a DHCP client may be incorrect. For example, a client may acquire its IP address from a DHCP server, but the DNS records do not reflect the IP address acquired or provide a mapping from the new IP address to the computer name (fully qualified domain name [FQDN]).

In Windows 2000, DHCP servers and clients can register with DNS if the server supports Dynamic DNS updates. The Windows 2000 DNS service supports dynamic updates. A Windows 2000 DHCP server can register with a DNS server and update pointer (PTR) and address (A) resource records on behalf of its DHCP-enabled clients using the Dynamic DNS update protocol. The ability to register both A- and PTR-type records lets a DHCP server act as a proxy for clients using Windows 95 and Windows NT 4.0 for the purpose of DNS registration. DHCP servers can differentiate between Windows 2000 and other clients. An additional DHCP option code (Option Code 81) enables the return of a client's FQDN to the DHCP server. If implemented, the DHCP server can dynamically update DNS to modify an individual computer's resource records with a DNS server using the dynamic update protocol. DHCP Servers that use Option Code 81 in their request message may have the following interactions when processing the DNS information.

DHCP and static DNS service are not compatible for keeping name-to-address mapping information synchronized. This might cause problems with using DHCP and DNS together on a network if you are using older, static DNS servers, which are incapable of interacting dynamically when DHCP client configurations change.

Follow these steps to avoid failed DNS lookups for DHCP-registered clients when static DNS service is in effect:

When using DNS and WINS together, consider the following options for interoperation:

In Windows 2000 Server, the DHCP Server service provides default support to register and update information for earlier DHCP clients in DNS zones. Earlier clients typically include other Microsoft TCP/IP client computers that were released prior to Windows 2000. The DNS/DHCP integration provided in Windows 2000 Server enables a DHCP client that is unable to dynamically update DNS resource records directly to have this information updated in DNS forward and reverse lookup zones by the DHCP server.

Follow these steps to allow dynamic updates for DHCP clients that do not support Dynamic DNS updates:

This process is illustrated in Figure 11.8. 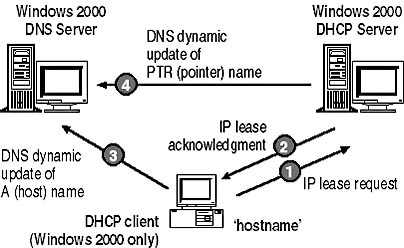 DHCP/DNS Update Interaction for DHCP Clients Prior to Windows 2000

Earlier versions of Windows DHCP clients do not support the DNS dynamic update process directly and therefore cannot directly interact with the DNS server. For these DHCP clients, updates are typically handled as follows:

This process is illustrated in Figure 11.9. 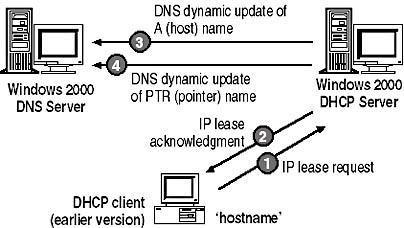 With Windows 2000, a DHCP server can enable dynamic updates in the DNS name space for any of its clients that support these updates. With dynamic update, the primary server for a zone can also be configured to support updates that are initiated by another computer or device that supports dynamic update. For example, it can receive updates from workstations registering A and PTR resource records, or from DHCP servers.