Prior to upgrading to Windows 2000, you should know from your migration plan which (if any) of your applications fail to run successfully under Windows 2000. If the applications are critical to your environment, you'll need to resolve these issues before upgrading. This lesson examines how to do this.

The Microsoft Windows 2000 Readiness Analyzer reports on both software and hardware incompatibilities that are likely to cause you problems. However, you should really only use the reports the Analyzer delivers as an indication of problems you're likely to encounter. Prior to migrating your enterprise to Windows 2000, you should have tested all your critical applications in the lab to see whether they run properly under the new operating system.

To reduce the amount of testing that's necessary, Microsoft has produced a directory of Windows 2000–compatible applications. You can find out whether your applications are on the list by going to www.microsoft.com/windows2000/upgrade/compat/search/software.asp and entering your application in the search box. Figure 11.8 shows the result of checking the compatibility of Microsoft Word 6.0. 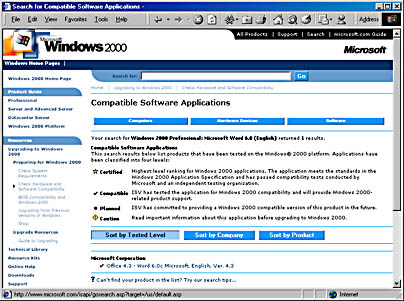 In a large-scale enterprise, you're likely to encounter a number of applications that won't run under Windows 2000. How these problems are resolved will depend on the following:

If problematic software currently runs on a Windows NT 4.0 BDC, if possible, you should move this application to a member server because leaving a BDC on the network will prevent you from switching Windows 2000 to native mode.

Software developed internally will obviously have to be modified if it is to run under Windows 2000. As for commercial software, it's worth researching Web sites for known problems and solutions or contacting the vendors directly for patches or new setup programs.

If you're migrating third-party applications, they might use account information that's hard-coded. If, for example, the applications are set up to use a particular domain controller or keep information about a particular account that must be used for authentication, this information might not exist after the upgrade and would thus cause problems running the application. A number of possible solutions exist to this situation:

In this lesson, you learned what to do if applications fail to run under Windows 2000 and how to resolve common problems that might cause them to fail.