To ensure that your name resolution problems are minimized, you should do the following:

If DNS is unavailable or doesn't support dynamic updates, the records for a new domain controller can't be created when you run the Active Directory installation wizard. The installation wizard will prompt you to confirm your DNS server settings at this point or ask whether you want to set up your own server as a DNS server.

If you already have a DNS environment in place and are having network connectivity problems, you shouldn't create your own server as a DNS server while installing Active Directory. Doing so would result in two primary DNS servers for a particular zone. Instead, you should resolve the network connectivity problems and ensure that the DNS server information is correct in the TCP/IP settings of the server you're upgrading.

If name resolution isn't functioning as it should, it's quite possible that not all the records that should be in DNS are actually there. Ensure that you're using dynamic update on your DNS servers, or, if you've elected not to, ensure that all the records have been manually entered.

To ensure that the appropriate records are in DNS, you can use the DNS administrative tool or the Nslookup utility. To repopulate DNS with Active Directory information in the event of a failure, you can use the Netdiag utility. You might also need to run ipconfig /registerdns and restart the Netlogon service.

In this practice, you'll test network connectivity and recover from a DNS database corruption.

To check the status of DNS

Now you're about to use the DNS administrative tool to do some drastic damage—but don't panic (and don't do this on your live systems). 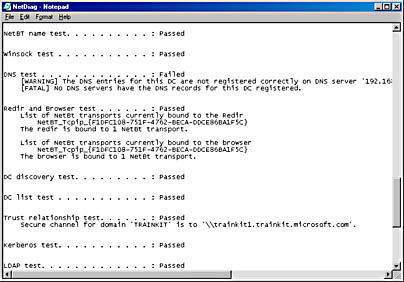 To purposely bring down the DNS service

To test the DNS service on MIGKIT1

To repair the DNS service

Netdiag is a useful troubleshooting tool for reporting and repairing problems.

Domain controllers need to replicate with one another successfully to maintain Active Directory information across your enterprise. If replication doesn't occur successfully, problems such as failed logons and failure to access resources can occur.

The site structure you've chosen will significantly affect the replication topology. Recall that all intrasite replication occurs via remote procedure call (RPC) mechanisms, and intersite replication must also occur over RPC if the servers are in the same domain (otherwise, they can use SMTP).

Replication can fail for a number of reasons. Here are some of the most common ones: 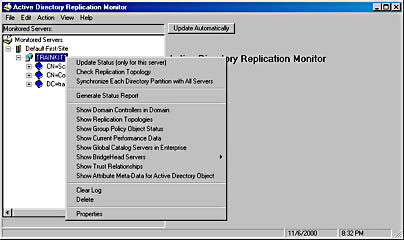 Figure 11.12 Replmon options for a server 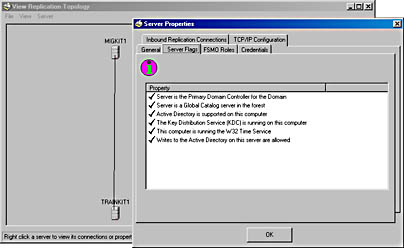 Figure 11.13 Replmon graphical representation of domain controllers in the trainkit forest and server properties of trainkit1

Failure of NetBIOS name resolution can occur in a number of situations. Some of the most common causes are listed here:

If NetBIOS name resolution does fail during a migration, legacy clients might be unable to contact domain controllers, and problems can occur with synchronization between the Windows 2000 PDC emulator and Windows NT 4.0 BDCs. Ensure that you implement a fault-tolerant mechanism such as backing up WINS servers for maintaining NetBIOS services during the migration.

Don't remove WINS from your environment until you're sure that it's no longer required. (As seen in Chapter 3, "Assessing Your Current Infrastructure," you can use Performance Monitor to analyze your WINS servers before removing them from the Windows 2000 infrastructure).

DHCP servers function under Windows 2000 in much the same way as they do under Windows NT, with one fundamental exception—they must be authorized in Active Directory to function. When you upgrade a Windows NT server running DHCP, it ceases to function as a DHCP server until the upgrade is complete and you authorize the server. In a migration scenario, it often makes sense to migrate this role onto servers already running Windows 2000 rather than upgrade the server and lose DHCP in the meantime.

If you do choose to migrate the role, remember that the considerations you had for DHCP under Windows NT 4.0 still apply. For example, if you migrate the role to a server in a different subnet and you want to service the same clients as you always did, you'll need the router(s) separating you from the old subnet to forward BOOTP requests, or you'll need to use DHCP Relay agents.

BOOTP might be shown as RFC 1542 in some manuals.

One significant difference between Windows NT 4.0 DHCP clients and Windows 2000 DHCP clients is their behavior in the event of not being able to find a DHCP server. Windows NT 4.0 clients are configured with an address of 0.0.0.0 under these circumstances, whereas Windows 2000 clients are automatically assigned with an address in the range of 169.254.0.1 through 169.254.255.254. (Incidentally, Microsoft Windows 98 and Microsoft Windows Me clients also behave this way.) This feature is known as Automatic Private IP Addressing (APIPA). Unusual network behavior such as certain subsets of clients being able to communicate with each other but not with the rest of the network can be caused by this "self-assignment" of IP addresses.

If you'd like to check whether DHCP addresses are being handed out to the clients, perform these steps:

In this lesson, you learned how to troubleshoot a variety of network service failures, including DNS, WINS, DHCP, and replication problems.