In the following sections, you'll use the Data Form Wizard to write a fully functional database application including features such as inserting, updating, and deleting data without writing a single line of code. In this simple example, you'll use the familiar Northwind database, and you'll use both the Customers and Orders tables to build a data relationship between table data.

Now add a Data Form Wizard by selecting Project Add New Item Data Form Wizard from the available templates. You can type DataForm1.vb as the name of your DataForm class in the Name field of the dialog box (see Figure 2-10). (If you're using C# language, the filename would be DataForm1.cs.) 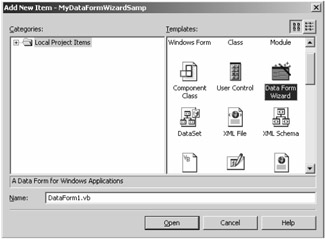 Step 4: Choosing the DataSet You Want

On the second page of the wizard, you can choose a DataSet name that will later be used to access the data. You can either create a new DataSet name or select an existing one. If there's no DataSet available in the project, the Use the Following Dataset Named option is disabled. For this test, type MyDS as the DataSet name in the Create a New Dataset Named option and move to the next page by clicking the Next button.

The next page of the wizard lets you pick the tables and views you want to connect to the DataSet. As you can see in Figure 2-11, we selected the Customers and Orders tables in the Available Items list on this page and use the > button to add these tables to the Selected Items list. 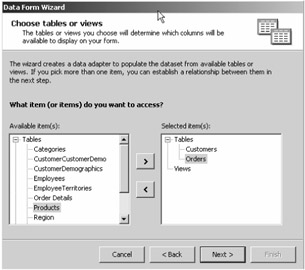 Now you're ready to create a relationship between these two tables.

Step 7: Creating a Relationship between Tables

When you run the final program, you'll see how you can filter all orders for a customer based on the CustomerID. As you can see from Figure 2-12, you need to pick one table as parent and another table as a child based on the relationship between them. In this example, the Customers table is the parent table, and the Orders table is the child table. 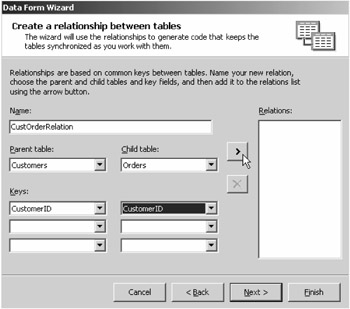 Figure 2-12: Selecting Customers as the parent and Orders as the child table to create the CustOrderRelation relationship

Step 8: Choosing Tables and Columns to Display on the Form

The next page of the wizard lets you select which tables and columns you want to show on the form. For this example, select all the columns from both of the tables (this is the default selection). As you can see in Figure 2-13, the Customers table is the master, and the Orders table is the detail table. On this page, you can select whatever column you want to display on the form. 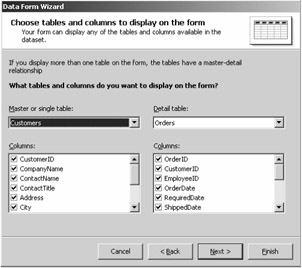 Figure 2-13: Choosing columns to display on the Data Form Wizard

This page is an important part of creating your form. Actually, the Data Form Wizard adds a Form with some controls on it and writes code to fill, update, delete, and navigate data. There are two ways to view the data, and you choose your option on this page. These two options are as follows: 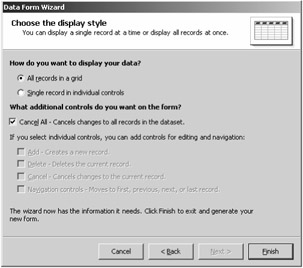 Figure 2-14: Choosing between a grid and individual controls on the Data Form Wizard

The output of All Records in a Grid looks like Figure 2-15. After that you can resize or move the controls on the form. 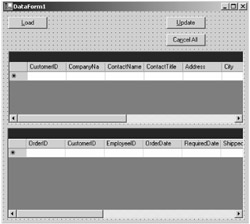 The second option, Single Record in Individual Controls, shows data in text boxes and provides you with navigation controls. As you can see from Figure 2-16, the Single Record in Individual Controls option activates Add, Delete, Cancel, and Navigation Controls check boxes. You can uncheck these check boxes if you don't want to add those features to your project. 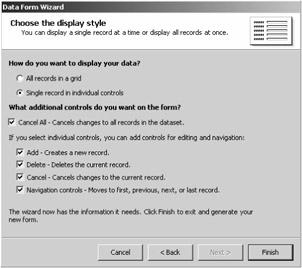 The form generated by this option looks like Figure 2-17. As you can see, each column of the table has a field on the form. 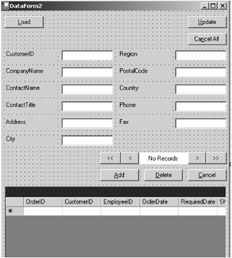 After selecting the data display style, click the Finish button. The Data Form Wizard adds the Windows form DataForm1 and the class DataForm1.vb corresponding to it.

Step 10: Calling the Data Form Wizard Form from the Application

Now you need to change one more thing. You need to call the DataForm1 form. Generally, you call a DataForm from a menu or a button click event handler. Say you've added two DataForm objects, DataForm1 and DataForm2, using both the options. The code in Listing 2-4 calls DataForm1.

After compiling and running your application, you'll notice that without writing a single line of code, you just created a fully functional database application.

The Load button on the individual control form loads the data, and the Add, Update, and Delete buttons on the form inserts, updates, and deletes records, respectively.

You just saw how you can develop fully functional database applications with the help of the Data Form Wizard. Now let's see what the wizard does for you in the actual code. (The inherent beauty of the VS .NET IDE is that it magically hides all the messy code for you.) The wizard adds two items to your project: MyDS.xsd and DataForm1.vb.

MyDS.xsd is an XML schema for the DataSet you've added to the project. (It's similar to the one discussed in the "Understanding Typed DataSets in VS .NET" section of this chapter.)

The LoadDataSet method loads the data from the data source into the controls by calling FillDataSet (see Listing 2-7). As you can see from the code, it assigns the MyDS DataSet generated by the Data Form Wizard as a temporary DataSet and fills it using the FillDataSet method.

Listing 2-8: The FillDataSet Method Generated by the Data Form Wizard

Listing 2-9: The UpdateDataSource and UpdateDataSet Methods Generated by the Data Form Wizard

The btnCancelAll_Click method is the Cancel All button click handler, which calls the DataSet's RejectChanges method (see Listing 2-10).