This section discusses a personalization/localization technique that can be used to generate personalized interactive video content. This technique is implemented by the HotStreams™ system. The creation of a personalized video production can be viewed as a filtering process. A complete version of the interactive video production is defined in the meta-database. Each element of the video, such as video scenes and sequences, and hyperlink are classified according to the profiling scheme used for the given type of content. These attributes are matched with the customer's preferences during personalization. The elements that do not match the customer preferences will be filtered out of the personalized version of the video. The filtering process will be described in more detail in the next few subsections.

Personalization is especially important in a streaming video service offered to mobile users. The user may be subscribing to an interactive news service, for instance, and may have to pay for the actual value of a specific news program. At home, the user may want to watch a half-an-hour news presentation on her TV or computer. It is very unlikely, however, that she would be interested in watching the complete 30 minutes' video on her PDA when she is out traveling. Hence she might prefer to receive and pay for only a 3–5 minutes long headline version covering topics that interest her.

Figure 16.12 shows a simple personalization scenario for financial news. The sample financial news video (a) contains two sequence nodes (Seq1 and Seq2) corresponding to two news stories. The first story in the sample video is about the computer industry in Asia while the second is a story about the European automobile industry. Each news story further consists of several scene nodes (nodes A through E). The meta-data describing each of the scenes contains one attribute that indicates whether the scene is to be included in the headline and/or the extended version of the news. As indicated by a capital H in the figure, scenes A and D are the only ones to be included in the headline version. The extended version, however, will include all five scenes - as can be seen from the presences of a capital E. 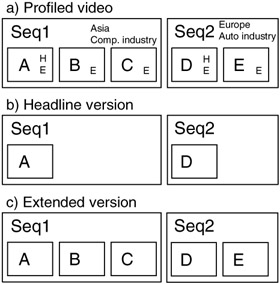 A hypervideo may also contain hyperlinks to ordinary web pages. Figure 16.13 illustrates how the version attribute of the hyperlink can be used to determine what web page would be loaded in the right part of the HotStreams™ user interface shown in Figure 16.1. Scene node A in the figure contains a hyperlink to web page P1 that will be filtered out in the headline version, because it does not match the headline preference. The hyperlink from scene node D in the figure has two possible terminations, web page P2 or P3, respectively. As shown in part b) of the figure, the hyperlink will link to web page P2 when included in the headline version and to web page P3 when included in the extended version to match the preference selected by the end-user. 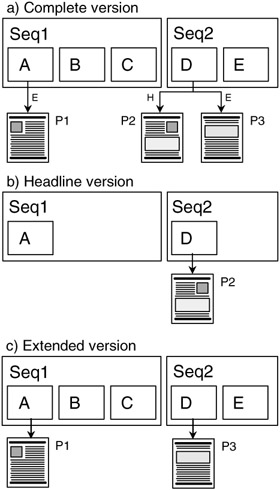 HotStreams™ will insert personalized commercials into the video stream - if the service provider decides to. The content manager will specify the locations within the video that can be target locations for inserting commercials using the video panel shown in Figure 16.5. Commercials are selected based on their type attributes. Each video is associated with a set of such types indicating what commercials should be accepted in the video.

Within the framework discussed in Section 4, personalization is one alternative to the Content Selection step shown in Figure 16.4. The input to this step is the end-user profile. The end-user may enter this information during the ongoing session or stored from previous sections.

The video and hyperlink panels discussed in Section 4.2.2 provide the means for the content manager to associate profiling attributes values with specific video sequences and hyperlinks. The HotStreams™ content management tool also contains an advertisement panel that is used to register and classify commercials that might be selected for insertion into the video streams.