We’ve looked at a number of key elements that can help to create player engagement with the game system. But the most important of these elements is actually one that we’ve talked about already, and that is conflict.

Conflict is at the heart of any good drama, and, as we’ve seen in our discussion of formal elements, it’s at the heart of game systems. Meaningful conflict is not only designed to keep players from accomplishing their goals too easily, as we pointed out in the discussion of formal elements, but it also draws players into the game emotionally by creating a sense of tension as to the outcome. This dramatic tension is as important to the success of a game as it is to a great film or novel.

Once the conflict is set in motion, it must escalate for the drama to be effective. Escalating conflict creates tension, and in most stories, the tension in a story gets worse before it gets better, resulting in a classic dramatic arc. This arc describes the amount of dramatic tension in the story as it progresses in time. Figure 4.14 shows how tension rises and falls during various stages of a typical story. This arc is the backbone of all dramatic media, including games. 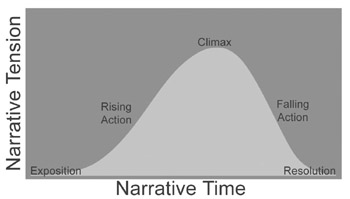 As the figure shows, stories begin with exposition, which introduces the settings, characters, and concepts that will be important to the rest of the action. Conflict is introduced when the protagonist has a goal that’s opposed by their environment, an antagonist, or both. The conflict, and the protagonist’s attempt to resolve it, causes a series of events that lead to a rising action. This rising action leads to a climax, in which some sort of deciding factor or event is introduced. What happens in the climax determines the outcome of the drama. The climax is followed by a period of falling action, in which the conflict begins to resolve, and the resolution, or dénouement, in which it’s finally resolved.

To better understand the classic arc, let’s look at in terms of a simple story you are probably familiar with. In the movie Jaws, Sheriff Brody is the protagonist. His goal is to keep the people of Amity safe. The antagonist is the shark, who opposes Brody’s goal by attacking the people of Amity. This creates a conflict between Brody and the shark. Brody, who’s afraid of the water, attempts to keep the people safe by keeping them out of the water, but this plan fails. The tension rises as the shark attacks more people, even threatening Brody’s own children. Finally, Brody must face his fear and go out on the water to hunt down the shark. In the climax of the story, the shark attacks Brody himself. The story resolves when Brody kills the shark and returns the story to the status quo. Simple right? You can look at any story you know and you’ll see the dramatic arc reflected in its structure.

Now, let’s look at the arc again, this time in terms of a game. In a game, the rising action is linked to both the formal and dramatic systems. This is because games are usually designed to provide more challenge as they progress. Games that also have well-integrated dramatic elements will intertwine those elements with the formal system so that as the challenge rises, the story develops. Here’s an example from a classic game: In Donkey Kong, Mario is the protagonist. Mario’s girlfriend, Pauline, has been kidnapped by the giant ape, Donkey Kong, and taken to the top of a building under construction. Mario’s goal is to save Pauline before time runs out. To do so, he must climb the levels of the building, traversing girders, elevators, and conveyer belts, while avoiding flames, barrels, and bouncing rivets thrown at him by Donkey Kong. Each time Mario reaches Pauline, Donkey Kong grabs her and carries her off to the next higher level. Each level builds in difficulty, creating rising tension for the player. Finally, in the climax of the game, Mario must not only avoid Donkey Kong’s attacks, but also fight him directly by removing all the rivets on every floor of the level. After the rivets are removed, Donkey Kong falls head first onto a stack of girders and is knocked out, allowing Mario to rescue Pauline and resolve both the formal and dramatic tension.

It’s clear from even these simple descriptions that the story in Jaws is more developed as to character and story—Brody has a fear which he must overcome in order to solve the problem, and his character changes in motivation as he goes from protecting all the people of Amity, to saving his own family, to defending himself from the shark. While Mario has a goal, and he’s certainly vulnerable to attacks from Donkey Kong, he does not have any internal conflict that keeps him from completing his goal, and his goal never wavers. The jeopardy that Pauline is in never increases either, a touch that would have made the formal and dramatic systems of the game better integrated.

What Mario has that Brody does not, however, is that his success or failure is in the hands of the player. It’s the player who must learn how to avoid the attacks, moving closer and closer to the goal. And in the climax of the game, it’s the player who must figure out how to topple Donkey Kong from his perch and knock him out. So while our response to the climactic moment in Jaws, when Brody figures out how to finally kill the shark, is a release of tension built up by our empathy for his character and the character’s struggles over the course of the story, our response to the climatic moment in Donkey Kong is quite different.

In the case of Donkey Kong, we are the ones who have figured out the crucial action needed to resolve the tension, and that tension has built up over a number of levels of play. When we finally resolve that tension, there’s a sense of personal accomplishment on top of any sympathetic response that we might have to the resolution of Mario and Pauline’s story. This integration of conflict in the formal and dramatic systems can clearly provide a powerful combination for the players in a game experience.

Choose a game that you’ve played all the way through. Make certain it’s a game with a story involved. For example Halo, Deus Ex, StarCraft, and Star Wars: Knights of the Old Republic, might be good choices. Now, plot the story against the dramatic arc.

Now, take the same game and plot the gameplay against the dramatic arc.

Take the same game and come up with three changes to the story or gameplay that you believe would make the two better integrated.