Most people would agree that one thing that engages them in a game is 'challenge.' What do they really mean by challenge, though? They don't simply mean that they want to be faced with a task that is hard to accomplish. If that were true, the challenge of games would hold little difference from the challenges of everyday life. When players talk of challenge in games, they're speaking of tasks that are satisfying to complete, that require just the right amount of work to create a sense of accomplishment and enjoyment.

Because of this, challenge is very individualized and is determined by the abilities of the specific player in relationship to the game. A young player, just learning to count, might find a game of Chutes and Ladders particularly challenging, while an adult, who mastered that skill long ago, would probably find it boring.

In addition to being individualized, challenge is also dynamic. A player might find one task challenging at the beginning of a game, but after becoming accomplished in the task, they'll no longer find it challenging. So, the game must adapt to remain challenging and hold the interest of the more accomplished player.

Is there a way to look at challenge that's not defined by individual experience? One that can give us some general ideas to keep in mind when designing a game? When you set out to create the basic challenge in your game, you might start by thinking how people really enjoy themselves, and which types of activities make them happy. As it turns out, the answer to this question is directly related to the concept of challenge, and the level of challenge presented by an experience.

The psychologist Mihaly Czikszentmihalyi set out to identify the elements of enjoyment by studying similarities of experience across many different tasks and types of people. What he found was surprising: regardless of age, social class, or gender, the people he talked to described enjoyable activities in much the same way. The activities themselves spanned many different disciplines, including performing music, climbing rocks, painting, and playing games, but the words and concepts people used to describe their enjoyment of them were similar. In all these tasks, people mentioned certain conditions that made the activities pleasurable for them:

First, the experience (of enjoyment) usually occurs when we confront tasks we have a chance of completing. Second, we must be able to concentrate on what we are doing. Third and fourth, the concentration is usually possible because the task undertaken has clear goals and provides immediate feedback. Fifth, one acts with a deep but effortless involvement that removes from awareness the worries and frustrations of everyday life. Sixth, enjoyable experiences allow people to exercise a sense of control over their actions. Seventh, concern for the self disappears, yet paradoxically the sense of self emerges stronger after the flow experience is over. Finally, the sense of the duration of time is altered; hours pass by in minutes, and minutes can stretch out to seem like hours. The combination of all these elements causes a sense of deep enjoyment that is so rewarding people feel like expending a great deal of energy is worthwhile simply to be able to feel it.[1]

Based on his findings, Czikszentmihalyi created a theory called 'flow,' which is illustrated in Figure 4.1. As can be seen in the diagram, there's a dynamic relationship between challenge and ability, frustration and boredom that creates an optimal experience for a person engaged in an activity.

When a person begins performing an activity, they usually have a low level of ability. If the challenge of the activity is too high, they will become frustrated. As they continue on, their ability rises, however, and if the challenge level stays the same, they will become bored. Figure 4.1 shows a path of rising challenge and ability, balanced carefully between frustration and boredom, which would result in an optimal experience for a user.

If the level of challenge remains appropriate to the level of ability, and if this challenge rises as the ability level rises, the person will stay in the center region and experience a state that Czikszentmihalyi calls 'flow.' In flow, an activity balances a person between challenge and ability, frustration and boredom, to produce an experience of achievement and happiness. This concept is very interesting for game designers because this balance between challenge and ability is exactly what we are trying to achieve with gameplay. Let's look more closely at the elements that help to achieve flow.

A challenging activity that requires skill

According to Czikszentmihalyi, flow occurs most often within activities that are 'goal-directed and bounded by rules … that could not be done without the proper skills.'[2] Skills might be physical, mental, social, etc. For a person who does not have any of the skills a task requires, it is not challenging, but meaningless. For a person who has the skills, but is not completely assured of the outcome, a task is challenging. This is particularly important to game design. 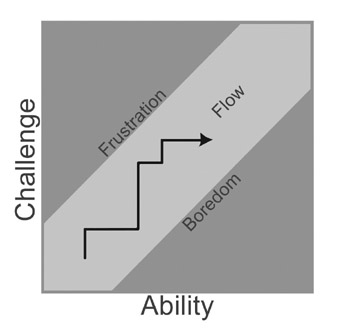 The merging of action and awareness

'When all of a person's relevant skills are needed to cope with the challenges of a situation, that person's attention is completely absorbed by the activity,' Czikszentmihalyi goes on to say. 'People become so involved in what they're doing that the activity becomes spontaneous, almost automatic; they stop being aware of themselves as separate from the actions they are performing.'[3] 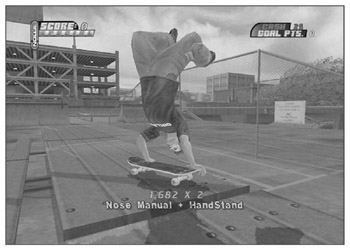 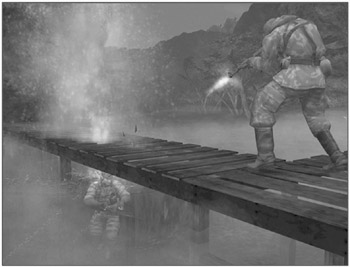 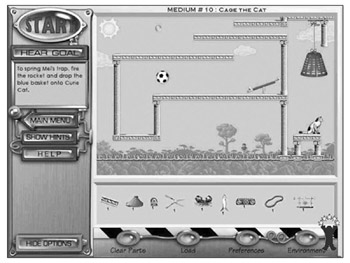 In everyday life, there are often contradictory demands on us; our goals are not always clearly defined. But in flow experiences, we know what needs to be done, and we get immediate feedback on how well we're achieving our goals. For example, musicians know what notes to play next and can hear when they make mistakes; the same is true whether it's playing tennis or rock climbing. When a game has clearly defined goals, the players know what needs to be done to win, to move to the next level, to achieve the next step in their strategy, etc., and they receive direct feedback as to their actions toward those goals.

Pick three games and list the types of feedback generated in each. Then describe how the feedback relates to the ultimate goal of each game.

Concentration on the task at hand

Another typical element of flow is that we are aware only of what's relevant here and now. If the musician thinks of his health or tax problems when playing, he's likely to hit a wrong note. If thesurgeon's mind wanders during an operation, the patient's life is in danger. In game flow, the players are not thinking of what's on TV or how much laundry they have to do; they are focused entirely on the challenges presented in the game. Many game interfaces take over the entire screen of the PC or build impressive audio/visual worlds to focus our attention. Here's a quote from a mountaineer describing a flow experience (but these might as well be the words of an EverQuest player): 'You're not aware of other problematic life situations. It becomes a world unto its own, significant only to itself. It's a concentration thing. Onceyou're in the situation, it's incredibly real, and you're very much in charge of it. It becomes your total world.'[4] 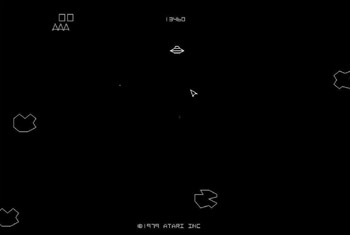 Figure 4.5: Concentration on the task: Asteroids

The paradox of control

People enjoy the sense of exercising control in difficult situations; however, it's not possible to experience a feeling of control unless the outcome is unsure, meaning that the person's not actually in complete control. As Czikszentmihalyi says, 'Only when a doubtful outcome is at stake, and one is able to influence that outcome, can a person really know she is in control.'[5] This 'paradox of control' is a key element of the enjoyment of game systems. How to offer meaningful choice to players, without offering complete control or an assured outcome, is a subject we will return to many times throughout this book.

The loss of self-consciousness

In everyday life, we are always monitoring how we appear to other people and protecting our selfesteem. In flow we are too involved in what we're doing to care about protecting the ego. 'There is no room for self-scrutiny. Because enjoyable activities have clear goals, stable rules, and challenges well matched to skills, there is little opportunity for the self to be threatened.'[6] Although the flow experience is so engrossing that we forget our self-consciousness while we're engaged in it, after a flow activity is over, we generally emerge with a stronger self-concept. We know that we have succeeded in meeting a difficult challenge. So, for example, the musician feels at one with the harmony of the cosmos; the athlete moves at one with the team; the game player feels empowered by the efficacy of her strategies. Paradoxically, the self expands through acts of self-forgetfulness.

The transformation of time

'One of the most common descriptions of optimal experience is that time no longer seems to pass the way it ordinarily does,' says Czikszentmihalyi. 'Often hours seem to pass by in minutes; in general, most people report that time seems to pass much faster. But occasionally the reverse occurs: Ballet dancers describe how a difficult turn that takes less than a second in real time stretches out for what seems like minutes.'[7] Digital games are notorious for sucking players in for hours on end because they involve players in flow experiences that distort the passage of time. 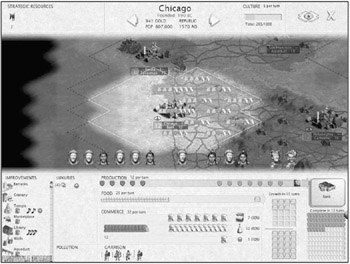 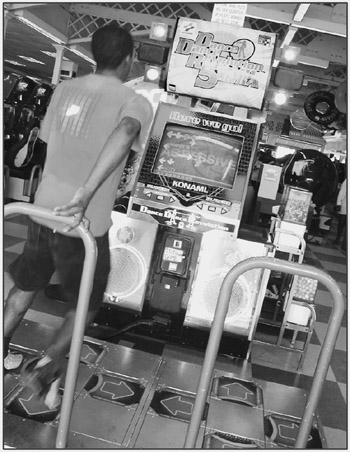 Experience becomes an end in itself

When most of these conditions are present, we begin to enjoy whatever it is that produces such an experience and the activity becomes autotelic, which is Greek for something that is an end in itself. Some activities such as art, music, and sports are usually autotelic: there is no reason for doing them except to enjoy the experience they provide. Most things in life are exotelic. We do them not because we enjoy them but in order to achieve some goal. Games that achieve flow are both goal- based as well as enjoyable as an end in themselves.

These elements of enjoyment are not a step- by-step guide to creating enjoyable, challenging game experiences; you need to work out for yourself what these ideas mean in the context of your own games. But the focus that Czikszentmihalyi places on goal-oriented, rule-driven activities with clear focus and feedback are clues that might point you in a beneficial direction.

Think about questions like these as you design your game:

Answering these questions is a good first step toward creating an environment where challenge becomes a central attraction, rather than a feature that is too off-putting, or too simplistic to engage their emotions. 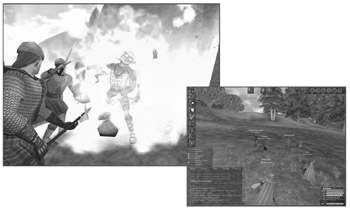