Most procedures will need some type of temporary storage area to manipulate data and hold it for later use. VBA stores this data in memory using a variable. It is also possible to store in memory a value that is not going to change; these values are called constants. Variables can hold values of different data types, which are specified when the variable is named, or declared. Variables should always be declared to reduce the chance of introducing bugs in the procedure and to properly allocate the amount of storage needed to hold the variable.

Variables are declared within a procedure by using the Dim, or dimension, statement. The most common usage of the Dim statement is

This statement explicitly declares a variable named varname as a variable of type. Multiple variables can be declared on one line by separating them with a comma, like this:

When variables are declared, they should be declared as a specific data type. This data type determines the values that can be stored within the variable and how much memory is required to store the value. VBA provides different data types to handle numbers, strings, dates and times, Boolean values, and objects. You can even declare your own data type when needed.

The majority of the data types available in VBA are numeric types, each of which handles a different range of values with varying amounts of precision. The numeric data types along with their specifications are listed in Table 4-7.

Some procedures will require a reference to a particular value that rarely, if ever, changes. Rather than repeatedly entering the same value, you can create a reference, called a constant, for it. Defining a constant lets you specify the actual value only once in your code and use the reference whenever you need it.

VBA itself has many built-in constants, called intrinsic constants, designed to make it easier for you to work with the many functions available. For example, if you had a procedure to create a line chart, you could use the intrinsic constant xlDot to make the line dotted in appearance.

You specify your own constants by using the Const statement, which works the same as the Dim statement with the exceptions that you must supply the value of the constant and only one constant can be declared on a line. The following lines declare two constants, the first a byte value with the number of days in December and the second a Single variable with an accepted value for pi.

Strings that have been declared but have not yet had a value assigned to them are known as empty strings. To assign a value to a string variable, it needs to be enclosed within double quotation marks. The following lines are examples of assigning values to strings:

Dates and times are stored within the Date data type. The range of dates that can be stored is from January 1, 100, to December 31, 9999, with all times from 0:00:00 to 23:59:59. Although a Date variable can hold both a date and time, if you need only one element, only that element needs to be assigned to the variable; the other will be omitted from the variable.

The Visual Basic Editor might change the dates and times that you type to reflect your computer’s date and time settings. For example, #15 July 1999# might become #7/15/1999#.

Variants are the catchall data type of VBA. If a variable is declared but not typed, it will be cast as a Variant data type. Variants can hold any type of data except for fixed-length strings and must be used for certain data types, such as Currency.

When working with variants, VBA will attempt to use it as the data type that best fits the data being stored in the variable, but it might not always pick the right type. Assigning a variant the value of 64 * 1024 produces an error message. Because both operands, 64 and 1024, are considered Integer data types by VBA, it tries to store the result as an Integer. The actual result, 65536, is too large for an Integer data type and produces the error message.

To avoid having VBA pick the wrong data type, you can convert values to a specific data type. In the preceding example, by explicitly converting one of the values to the Long data type, VBA will cast the result as a Long also and avoid the error.

VBA provides functions to convert values to any numeric data type. When converting from one data type to another, keep in mind the level of precision that is used by each type and the limitations of each data type. For example, converting a Single variable, which has a decimal component, to a Long, which does not, will result in losing the decimal portion of the value, and converting the variable back to a Single will not restore the decimal portion of the original value.

A list of the conversion functions along with the type of data returned and rounding rules is provided in Table 4-8. The expression argument provided to the functions can be any numeric or string expression. String expressions need to be in a format that can be recognized as a numeric value, but the specific format varies from region to region.

In the preceding procedures, both Procedure1 and Procedure2 have declared a variable named intCounter. In Procedure1, intCounter has been set to 87, this means intResult will be set to 6438 when the third line is executed. In Procedure2, intCounter has not been set to a specific value so it retains the initialized value for an Integer, which is 0. Then the second line is executed, and intResult is given a value of 0 also (0 * 74 = 0).

To use a variable in more than one procedure, it needs to be declared at the module level. Variables declared at the module level can be used by any procedure that is within the same module. To declare a module variable, the declaration statement for the variable needs to be entered in the Declaration section of the module (following any Option statements and before any procedures), as shown in Figure 4-12. 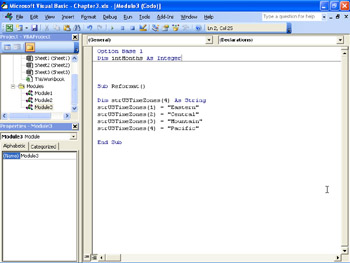 Figure 4-12: If you want a variable to be available to all procedures in a module, you need to declare the variable in the declaration section for modules.

Module variables can be exposed to other modules by using the Public modifier. When a variable is declared Public, it becomes visible to all other modules, not just the module it is declared in.

Although all module variables are private by default, for clarity it is better to declare them using Private instead of Dim. Variables that are to be visible to all modules are declared using the Public statement. The following two declarations illustrate the difference between a Public and a Private declaration: