In many respects, a worksheet, consisting of a series of rows and columns, is very much like a table in a relational database. This similarity can make a worksheet a powerful tool for manipulating database information.

A relational database consists of a series of tables. Each table roughly corresponds to a single worksheet. A table is structured as a series of rows and columns of data, as shown in Figure 22-1. 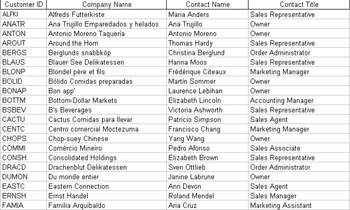 Figure 22-1: A database table is constructed as a series of rows and columns.

A database table doesn't rely on row numbers, like a worksheet. Also, columns don't have arbitrary column names such as A, B, or C. Instead, tables rely on set theory, which means that you deal with groups of rows, not the individual columns. A set of rows extracted from one or more tables can be thought of as a virtual table or a view. The tables used to create a view are known as base tables. A view can be created from one or more base tables or other views in the database. Views are important because many operations in a relational database create or return virtual tables.

Unlike worksheets, whose cells can store any type of data, relational databases require that each column must have a single data type. Typically, this data type can be a binary number, a string of characters, a Boolean value, a date/time value, or an unformatted binary value. In addition to having a data type associated with each column, a column in a particular row may contain a Null value. Null means that a value has not been assigned to the column. Notice that an empty string isn't the same thing as a Null value; an empty string is a string that contains zero characters, whereas Null simply means that the column doesn't have a value.

Inside OutDatabase Design and Administration

Designing and using databases can be a complex task. Most organizations have one or more individuals that are responsible for the database system. This is especially true if you are using a high-performance database such as Microsoft SQL Server, Oracle, or DB2. If you are not sure how these databases work in your organization, look for the individual called the database administrator. The database administrator should be able to answer many questions that apply to your specific environment.

In situations where you are dealing with simple database systems such as Access, you might not have a database administrator. In these cases, you might want to talk to the person who wrote the programs for the database. This individual should be able to provide you information, such as connection strings, that you need to open the database from Excel.

If you want to design your own database, keep in mind the following: KISS (Keep It Simple Stupid) and SMILE (Simple Makes It Lots Easier). If you have only a few hundred pieces of data, consider keeping all the data in a set of Excel worksheets. You might find it easier to maintain than building a real database.

If you really believe that you need a database, take some time and read some books that provide a good introduction to databases such as Microsoft Office Access Inside Out by John L. Viescas (Microsoft Press, 2003). Just keep in mind that it's very easy to design a database that's so complex to use that it really doesn't address your original needs.

A secondary key is different from the primary key in that it need not uniquely identify a single row. In fact, secondary keys are useful for locating groups of rows that have something in common, such as all the customers in a particular city or all the orders that were placed on the same date.

A foreign key is merely a secondary key in one table that is also the primary key in another table. Foreign keys are useful for identifying a group of data that is related, such as the collection of orders that was placed by a particular customer or the item numbers that comprise a single order.

Some databases, including Microsoft Access, allow you to define an identity column. An identity column (called an AutoNumber column in Access) automatically generates a new value when a row is inserted into the table. This type of column is extremely useful as the primary key for a table because the database guarantees that the value is always unique.

Figure 22-2: Databases are typically organized as a database client talking to a database server.

Excel relies on an API called Active Data Objects (ADO) to access databases. ADO is a standard component in Microsoft Windows, so it's always available to your program. Using ADO, you can connect to a variety of different databases, including Access, SQL Server, Oracle, and others.

Once you've established a connection with a database server with ADO, you can execute SQL statements to return data to your application or to make changes to the data stored in a table.