Design of the Rental Enterprise Application

Design of the Reservation Service EJB

The ReservationServiceEJB uses a connection factory to get a persistence manager. Since the EJB container is managing transactions, each business method obtains a persistence manager and releases it before returning. See Chapter 6 for a discussion of the design constraints for the various types of EJBs. The service may use either a JDO datastore or optimistic transaction. 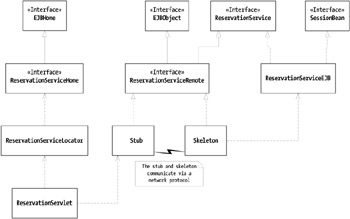 As shown in Figure 11-1, the communication between the servlet and the EJB occurs between two proxies, a stub and a skeleton, that communicate by means of a network protocol such as RMI or RMI-IIOP. Both implement the ReservationServiceRemote interface. The skeleton, which resides on the EJB server, delegates invocations of the business methods to an instance of the ReservationServiceEJB. The EJB container is responsible for generating the stub and skeleton classes. JBoss creates these dynamically.

Encapsulated Changes in the Reservation Service

Public Changes to the Reservation Service

The signature of the flipReservations method in the ReservationService also changes. Like the other business methods in the ReservationService interface, it adds the RemoteException to its throws clause. It also drops the application-defined OptimisticReservationException from its throws clause. Even if the EJB uses JDO's optimistic transactions, there is no opportunity for the flipReservations method in the ReservationServiceEJB to detect an optimistic transaction failure and report it by throwing an OptimisticReservationException. In JDO 1.0, the JDO runtime throws a JDOUserException when it discovers an optimistic lock failure, and in JDO 1.0.1, it throws a JDOOptimisticVerificationException. Since the container commits the transaction after the bean's business method returns, there is no opportunity for the bean developer's code to handle the exception. Since both types of exceptions are unchecked exceptions, the EJB container rolls back the transaction and disposes of the bean instance if the JDO implementation throws either one.

However, the flipReservations method can still detect a difference between the version of a Rental object that the client returns to it and the version of the Rental object that it finds to modify. As a result, the flipReservations method still throws the application-defined ExtendedOptimisticException. When this occurs, the method calls the setRollbackOnly method in the javax.ejb.SessionContext object to ensure that any changes made to persistent objects up until that point cannot be committed.

Changes to the Application Data Classes

Why is this change to the Lighthouse class required in the EJB version of the reservation service but not in the servlet version? To answer this question, it is necessary to understand a little more about how the ReservationModel obtains and uses Lighthouse objects.

In the Web application, each ReservationService object is local and uses one persistence manager for its lifetime. While the ReservationServlet processes one HTTP request, it makes multiple calls to the same ReservationService object. Because the service uses one persistence manager and returns the local objects by reference, JDO's uniqueness requirement ensures that the Lighthouse objects returned by one method are the same Lighthouse objects returned by the other method. Because of the uniqueness requirement, there is no reason for the Lighthouse class to override the implementation of the equals method in the Object class, which uses JVM identity (==) to determine equality.

In the enterprise application, the ReservationService is remote and the lifetime of the persistence manager is coincident with the call to the business method. The business methods in the service return objects by value in a serialization stream. As a consequence, the two calls to the service, one to get the list of Lighthouse objects and the other to get the collection of Rental objects together with their associated Lighthouse objects, result in the ReservationServlet having two different sets of Lighthouse objects in memory. If the lookup into the list continues to rely upon JVM identity, it fails.

The solution is to upgrade the Lighthouse class by having it override the equals method and implement the SupportsIdentityString interface. The rental Web application made these changes to the Rental and Customer classes for other reasons when porting from the rental Swing application, and now these changes are required for the Lighthouse class in porting to the rental enterprise application. Listings 10-5 and 10-7 in Chapter 10 show the implementations of the SupportsIdentityString interface and the equals method in the Rental class. The upgraded Lighthouse class uses similar code.

Changes to the ReservationServlet Controller

Are There Any Other Changes?

Although the same low impact during the port can be achieved when using JDBC, the higher level of abstraction provided by JDO makes the ways to minimize the impact of the port more apparent. In fact, it is possible to completely encapsulate the differences between the local service and the EJB service, reducing them to differences between two implementations of a service locator interface and a data service interface. If you anticipate that you will be porting between these two deployment environments, creating this small amount of extra infrastructure would be a very sensible thing to do. It was not done in the examples in order to highlight the differences between the two application architectures.

Scaling Up in Complexity

The rental enterprise application is simple, but can you expect that its design will scale up to the complexity of a real-world application? It should. A significant advantage of JDO is the ability to work with the pervasive complexity of persistence at the right level of abstraction.

One important factor to consider when scaling up is the size of the serialization graph returned by the EJB's business methods. If you have a highly interrelated data model, then you could end up returning to the client far more information than you intend. When JDO is local to the client, a highly interrelated data model is not a concern because JDO's transparent persistence will fetch only what is required by the client. When persistent objects are returned to the client by serialization, the client receives a copy of everything that is reachable by serializable fields. Chapter 5 points out various approaches for handling the issues that arise when serializing application data objects.