Later in this chapter, we will give an example of how SCAPE was used to evaluate the awareness and privacy support of a particular application being considered for use by a retailer and supplier. Because we will give examples of developing SCAPE analysis materials that were culled from our case study, we introduce the case study scenario in the next subsection. The fine-grained awareness framework and awareness relationships that underpin SCAPE are introduced in the following subsections, ending this section with a by a step-by- step description of the SCAPE method.

We developed a scenario based on recent events in the popular business press (e.g., (Bianco & Zellner, 2003)). The scenario centers on the partnership between a fictitious major retailer (“Wal-Store”) and an equally fictitious nationwide distributor of juice drinks (“Sea Spray”).

Joy Brown is a beverages buyer at Wal-Store, and Jenn Smith is a manufacturer’s representative from Sea Spray. Jenn works with two product managers, Rod Leeds and Sally Steele. Joy wants to get the Sea Spray juice drink products on the shelves at Wal-Store at the lowest possible price by probing Sea Spray’s manufacturing, inventorying, and distribution processes and suggesting ways to streamline these processes. Jenn would like to get as many different Sea Spray products on Wal-Store’s shelves as possible and so is willing to work with Joy— up to a point. She does not want to give Joy information about the recipes for the newest juice drinks because Wal-Store has a history of using “inside” product information to manufacture similar products under the “Sal’s Choice” in-house label, thus eating into the market share of national brands.

Jenn would like to use the same IOIS with Joy as well as Rod and Sally, her product managers for the two new juice drinks. She would like to keep the proprietary information private from Joy, however.

Both Cohen et al.’s study and the Wal-Store scenario illustrate a need for IOISs to support detailed awareness and privacy requirements and to ensure that everything that is visible to others is revealed intentionally instead of being revealed accidentally or by default.

Awareness - Given two participants p1 and p2 who are collaborating via a synchronous collaborative application, awareness is the understanding that p1 has of the identity and activities of p2.

To support p1’s understanding of p2, an application provides p1 with information about the identity and activities of p2 without p1 having to request the information or p2 having to explicitly transmit it. Awareness information is intended to emulate the kinds of nonverbal cues that people get about each other when they work face to face in the same physical environment.

Type 1 - Awareness violation. Awareness information that should be provided is not (a violation of the first principle).

Type 2 - Privacy violation. Awareness information that should be kept private is revealed (a violation of the second principle).

A method for evaluating awareness support must provide for the identification of awareness violations and privacy violations. 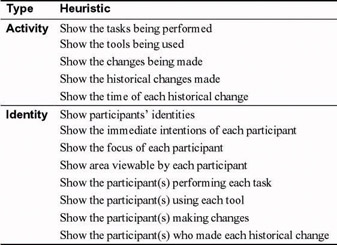 We refer to the situation where a participant has access to all possible awareness about another participant as complete awareness:

It is common for a participant to need (or to be permitted) only limited, rather than complete information about another participant, so that partial awareness should be provided:

Whether a participant p1 needs complete or partial awareness of another participant p2 depends on the roles played by p1 and p2. For example, in the application supporting the retail scenario, p1 may be a buyer and p2 may be a sales representative. We define a role to be a participant’s activities and responsibilities with respect to the other participants in a collaborative session.

Participants using a collaborative application can be partitioned into role-based equivalence classes (e.g., buyer, sales representative). All participants in the same role have the same awareness and privacy needs.

Figure 2: Awareness relationship matrix for the hypothetical application used by retailers and suppliers. (Numbers indicate the number of participants in each role.)

Steps for Performing a SCAPE Evaluation 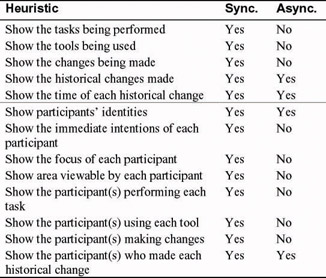 SCAPE is an inspection method performed by evaluators, and it is based on the awareness framework described earlier in this section. It is designed to help evaluators find both awareness violations and privacy violations. SCAPE takes into account the roles that participants play and the awareness relationships between the roles.

The SCAPE method has two parts: (1) development of a detailed, application- specific specification of awareness and privacy requirements; and (2) evaluation of the application for compliance with the specification. The SCAPE Handbook (Drury, 2001) contains more detailed explanations than can be included here, as well as examples, advice, and worksheets.

There are three steps to developing an awareness specification for a collaborative application: define the awareness relationships, develop role-based awareness policies, and identify activity-based exceptions to the policies. 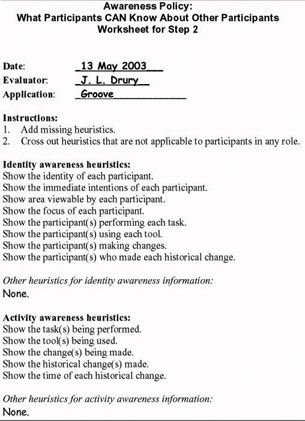 Figure 4: Awareness policy for the case study. (None of the awareness heuristics are deleted in this example, and no extra heuristics have been added. Notations to the worksheet are indicated by the Comic Sans MS font.)

For each awareness relationship, the evaluator begins with the general awareness specification and deletes any portions of the specification that are not applicable. (For example, if the application requires anonymity, then all identity heuristics are deleted.)

We also leave open the possibility that the evaluator may need to add to the specification. The evaluator performs this step as many times as necessary:

The output of this step is a set of role-based awareness policies expressed as heuristics.

Step 3 - Identify activity-based exceptions. The goal of this step is to tailor the role-based awareness policies developed in Step 2 so that they include any activity-related exceptions that are necessary to ensure privacy. All of the policies for partial awareness relationships must be tailored in this way. (There is no need to tailor the policies for complete and “no awareness” relationships.)

The evaluator begins with the awareness relationship matrix from Step 1 and the set of awareness policies from Step 2, and uses domain knowledge about tasks that participants will perform. The evaluator identifies the activities during which parts of an awareness policy should be suspended. (For example, it may be OK for a product manager to be aware of what a buyer is doing, except when the buyer is working on another purchase in which the product manager is not involved.)

The result can be seen in Figure 5, which is a portion of a privacy policy for the case study. The set of tailored awareness and privacy policies constitutes an application-specific awareness requirements specification. 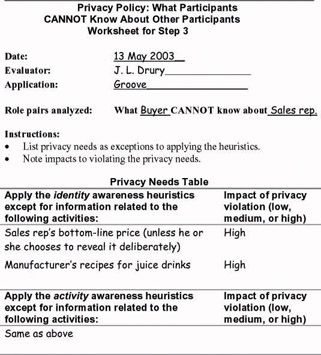 Figure 5: Sample privacy policy for the case study, showing what the buyer cannot know about the sales representative’s activities.

There are three steps to evaluating an application for compliance with an awareness specification: assess the level of effort a complete evaluation would entail, develop scenarios to use during evaluation, and perform the evaluation.

Step 5 - Develop scenarios. The goal of Step 5 is to specify activities that will cause SCAPE evaluators to perform sequences of actions that will exercise the application’s awareness support capabilities. Scenarios are a well-established technique for evaluation; Nielsen pointed out the advantages of using scenarios for heuristic evaluation when it is important to examine participants’ interactions (Nielsen, 1995). The evaluator uses the awareness specification from Step 3 and the prioritized list of awareness relationships from Step 4 to develop a master scenario and scenario worksheets to use during the evaluation. The master scenario worksheet from the case study can be seen as an example in Figure 6. 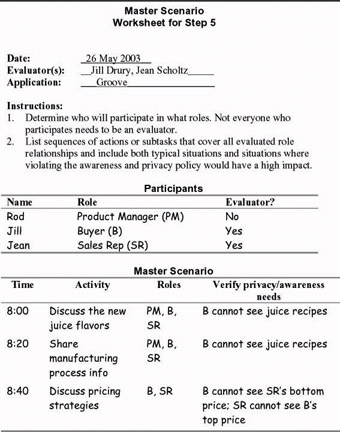 Step 6 - Perform the evaluation. The goal of this step is to identify awareness violations and privacy violations. Teams of evaluators perform the scenarios developed in Step 5 and examine the application for compliance with the specification from Steps 2 and 3. The output of this step is a set of problem reports.

Before performing a SCAPE evaluation, it is critical that the evaluators understand the users’ tasks and roles and the applications’ functionality. Without a good understanding of the users, the evaluation results may not predict how well the application will meet users’ needs (that is, the evaluation may point out issues that the users would not consider problems or may miss problems entirely). To understand the users, we performed a task analysis and critical incident analysis based on structured interviews with a buyer for a large Eastern-U.S. retailer. One of the evaluators already had significant prior experience with using the collaborative application and helped train the other (supplementing training provided by the developer’s tutorial information).

An explanation of the evaluation performed for the case study can be found below, after a description of the application evaluated.

Qshell for iSeries
C++ How to Program (5th Edition)
Microsoft WSH and VBScript Programming for the Absolute Beginner
Lean Six Sigma for Service : How to Use Lean Speed and Six Sigma Quality to Improve Services and Transactions
Python Standard Library (Nutshell Handbooks) with
Digital Character Animation 3 (No. 3)
flylib.com © 2008-2017.
If you may any questions please contact us: flylib@qtcs.net
Privacy policy
This website uses cookies. Click here to find out more.
Accept cookies