An important difference between the Unix and Aqua (and Mac OS 9) approaches to files and directories is the way the user sees disks and the locations of files.

Aqua displays files in folders, which are in turn located on volumes . (There is one or more volume per disk. Volumes show up in the Finder looking like disks.) Each volume has its own hierarchy of files and folders.

In Unix there is only one hierarchy of directories and files. If you have more than one volume on your system, then each volume is a part of one centralized hierarchy, rather than appearing as separate volumes on the desktop, as in Mac OS 9. The beginning of the hierarchy is the root directory. The root directory is always on the volume that you booted from it contains the kernel of the operating system. Figure 5.1 shows the hierarchy of your entire file system contained on three disks. (See the sidebar "Disks, Partitions, Volumes, and Removable Devices" for even more details.)

Figure 5.1. There is only one hierarchy of files on your system no matter how many disks and volumes you have. Unix uses a file in the /dev directory to represent each volume, so /dev/disk0s9 represents "disk zero, slice 9." 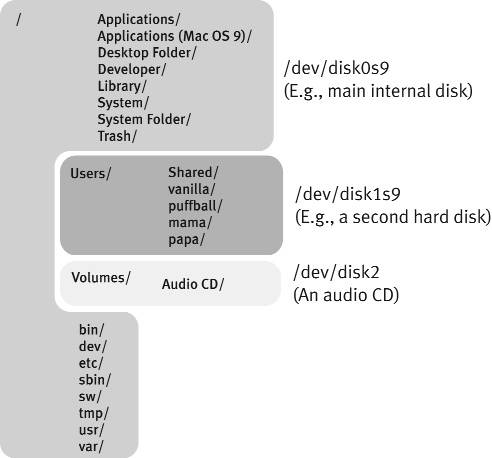 To see the contents of the root directory:

Your first thought may be, "Where did my disk(s) go?" You may have noticed that the disks you see in the Finder didn't show up in that listing. The answer is that disks and/or volumes are displayed in a normal Unix listing of the root directory. (In Unix, virtually everything is a file of some kind.) Unix uses a special file in the /dev directory to represent each disk and volume on the system. The /dev (for devices ) directory contains files that represent various physical and virtual devices, so /dev/stdin represents the STDIN we talked about in Chapter 2 and /dev/disk0 represents the first physical disk. Then /dev/disk1 would be a second disk, and /dev/disk0s2 would be "disk 0, slice 2" (a slice is also known as a partition , or volume ).