Databases are everywhere these days. It's all part of the increasing role of information in society. There is more information, and more need to organize it. Even your cell phone has a database.

MySQL is a relational database management system ( RDBMS ) that understands Structured Query Language ( SQL ) (pronounced either by saying the letters individually or the word "sequel"). The ideas of tracking relationships within a database and of being able to query it for information have been around for 20 years and are fundamental precepts to the way almost all corporate databases run today.

MySQL is a powerful, stable, open -source RDBMS that you can use without cost, but you can also purchase commercial support for it from the developers at MySQL (www.mysql.com).

If a database engine (that's another name for an RDBMS) understands SQL, then other applications can talk to it in a standardized fashion. Software written to communicate with one SQL database can usually communicate with any other with only minimal changes.

An RDBMS can contain many databases, such as one for "purchases" and one for "sales." Each database in turn may have many tables, identifying "customers," "invoices," and "invoice line items." A table is a collection of data entries that all have exactly the same list of headings, called columns or fields . Each table can have many columns, such as "ID number," "name," "address," and "phone."

A database is essentially a tool for organizing information. Relational databases are databases that can contain several tables of information, which can be linked to each other. A database of purchase histories might contain one table that lists customers (the "customer table"), another that lists invoices (the "invoice table"), and a third that lists invoice line items (the "invoice line-items table"). An entry in the invoice table might have only the invoice number, customer number, and invoice date. Thus, an entry in the invoice table is not actually a complete invoice; rather, it holds only the information that is unique to one invoice. This avoids the necessity of keeping a copy of the customer address for every invoice. The customer's ID number is in the invoice table and is used to look up the customer address for each invoice in the customer table. This connection between the tables is called a relationship .

Figure 14.17. Diagram showing the relationships between tables in a relational database. 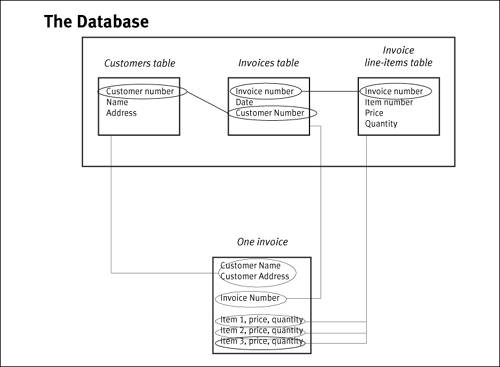 Learning how to use a database, totally apart from setting one up, is quite a project. But you have to have a database in order to start learning, and installing an industrial-strength database on Mac OS X is actually very easy.

You can install MySQL from source code using Fink or the other methods described in Chapter 13, "Installing Software from Source Code." With Fink, you can easily remove the entire installation. However, an even easier way to install MySQL is to download the MySQL installer package from the MySQL Web site.

Configuring MySQL involves several steps: creating a root password for MySQL, starting the mysqld program itself, learning how to use the mysql command-line tool, creating one or more MySQL users, creating a MySQL database, setting the access controls for the new database, and creating tables in the new database. Once all this is done, you can insert and retrieve data from the tables in the new database. Though this is more detail than we've gone into for most tasks in this book, we feel that it's appropriate because database mastery is a key asset for knowledgeable Unix users. See also the sidebar "GUI Tools for MySQL Administration."

MySQL has its own list of users, which are totally separate from the user accounts on your system. When you install MySQL, it has one user already installedroot. This can be a bit confusingthe MySQL root account is totally different from the Unix root account. It canand shouldhave a different password and is used only for managing MySQL.

For the following tasks, we are assuming you have added the directory /usr/local/mysql/bin to your PATH . If you haven't done that, do it now (see Chapter 7, "Configuring Your Environment with Unix," for instructions).

To start MySQL from the command line:

To shut down MySQL from the command line:

MySQL has dozens of available options. You put options into the MySQL options file, /etc/my.cnf . (The options file is also called the configuration file .) If that file does not exist, then reasonable default values are used.

The files contain some documentation about the various options, and the MySQL manual discusses options files in section 4.3.2 (see http://dev.mysql.com/doc/mysql).

To install a MySQL options/configuration file:

The main way to manage MySQL is to connect to the mysqld daemon using the mysql command-line utility. (See also the sidebar "GUI Tools for MySQL Administration.") Most of the commands you use inside the mysql utility are SQL commands, called statements . The MySQL manual has extensive coverage of SQL in section 13, "SQL Statement Syntax," as well as a complete tutorial in section 3, "MySQL Tutorial," which we strongly recommend that you read and perform.

In the following tasks, we use two databases that are created when you install MySQL. One is called "mysql"it's the "master database" containing information about MySQL itself, as well as all the databases, users, and access-control information. The other is called "test"; it's an empty database used foryou guessed ittesting.

When you connect to MySQL, you must do so as a MySQL user. Until you create more MySQL users, the only one that exists is the MySQL root user, so we use that user in this task. You do not need to be root to perform the following task. You are logging in to the MySQL server as the "MySQL" root user, which is not the same as the Unix root user (it just has the same name in order to confuse you).

To use the mysql utility to connect to the mysqld daemon:

To set up the access controls, connect to the MySQL master database, mysql. That is the database where MySQL keeps information about itself and any databases you create. Once again, we are assuming you have added /usr/local/mysql/bin to your PATH .

At the end of this chapter, we show you a simple Perl script that connects to MySQL. The script assumes you have created the sample database and user described below.

To create a new database in MySQL:

To add a table to a database:


For the following tasks, we assume that you are connected to the sample database as the user daffy, as described above.

About the SQL WHERE clause

To add a new record (row) to a table:

To select data from a table:

To change the values in an existing record:

To delete a row from a table:

Creating a script that uses SQL

Now that you have that lovely new database running, we are going to show you a very simple Perl script that uses MySQL.

The script uses the popular Perl DBI ( DataBase Independent ) module, which allows Perl scripts to be written to work with a variety of SQL databases. You add a second Perl module for the particular database engine you are using. So our script will also use the DBD::mysql module.

If this sort of thing interests you (and who would not be fascinated by such an enthralling subject?), then we suggest you have a look at the book Programming the Perl DBI , coauthored by Alligator Descartes and the creator of the Perl DBI module, Tim Bunce (O'Reilly; www.oreilly.com). Installing Perl modules is covered in Chapter 13.

To install the Perl DBI and DBD::mysql modules:

Once you have installed the Perl modules, you can create a simple script that will talk to the MySQL database engine. The script in the following task assumes you have created the "sample" database described earlier.

To create a Perl script that uses MySQL: