How to Use This Book

Unix for Mac OS X 10.4: Visual QuickPro Guide is designed so that each chapter builds upon the skills and understanding taught in the preceding chapters. So before we teach you how to edit files using Unix tools (in Chapter 6, "Editing and Printing Files"), for example, we show you how to work with files in general (in Chapter 5, "Using Files and Directories").

Most of this book consists of specific tasks laid out in a step-by-step fashion, with accompanying illustrations and examples of your input and the computer's output. The chapters and tasks are intended to be used as a tutorial, to teach you how to perform and understand the particular tasks and larger concepts. The book is also meant to be a reference work you will come back to as you continue to learn Unix, and as you find and create more uses for Unix.

We use the following graphic conventions throughout this book:

Where we want to indicate that you must press a particular key, we use special symbols such as

Whenever we show you a command or line of text to type into the computer, we assume that you will press

at the end of the line unless we tell you not to. To avoid visual clutter and repetition, we do not put the

symbol at the end of every line.

Used for figure and table references. For example: " Figure 0.1 shows the ' layers ' of Mac OS X, with the Aqua user interface on 'top' and the Darwin Unix layer at the foundation. Table 0.1 is an example of a table."

Figure 0.1. Diagram showing a very simplified view of the software layers in Mac OS X, with the Aqua user interface on top and the open -source Unix layer called Darwin at the foundation.

Used for Unix command-line text, including Unix commands and filenames. Basically, if you see something in code text, that means it is literally what would be typed into or come out of the computer. If a line of text is too long for this book's text margins, one or more gray arrows indicate the continuation of a single line of code. For example, the following should be typed as one long line:


Used in figures to distinguish text you type in from text that comes from the computer. Figure 0.2 has an example of how code text and code text in bold appear in a figure: The command line that the user typed is cal 05 2023 , and everything else came from the computer.

Figure 0.2. Example of using the Unix command line. The code text in bold is typed by you, the user; all the other text comes from the computer.


These indicate text that you type into the computer but where you must substitute the appropriate value for the italicized text. For example, if you see

then you would type the ls -l part literally, and then the name of a file instead of filename .

Used for emphasis and also to introduce words and phrases that are likely to be unfamiliar to Unix novices. For example, "The Unix concept of the working directory is similar to the GUI concept of the active window."

In Unix, filenames and command names are case sensitive. The standard Mac OS X file system (HFS Plus) is a case- preserving , case-insensitive file system. This means that it preserves the case when it stores filenames, but ignores case when looking for filenames, so you cannot have two files in the same folder if the only difference in their names is case: file1 and FILE1. This means that there are some situations in which "COMMAND" and "command" are the same, but because those are exceptions and because case sensitivity is the Unix standard, we assume that all commands and filenames are case sensitive unless otherwise noted.

The image in Figure 0.3 is Hexley, the mascot/logo for Darwin, which is the name of the Unix part of Mac OS X (see www.hexley.com). We use Hexley to indicate features of Mac OS X's Unix environment that differ from those of most other Unix versions. These features are available only in the open-source version of Unix (called Darwin) used in Mac OS X. Most of the Unix features of Mac OS X do not differ from those of other Unix systems.

Figure 0.3. This is Hexley, the mascot/logo for Darwin. Darwin is the name of the version of Unix used as the foundation of Mac OS X. 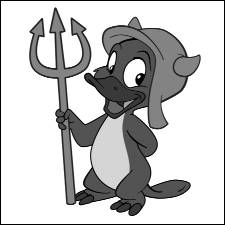 The Hexley Darwin OS mascot is 2000 by Jon Hooper, all rights reserved. Used with permission. Permission to use the mascot may be obtained from Jon Hooper, 646 Luton Drive, Glendale, CA 91206, or via e-mail at jonhoops@mac.com.