Many complex software systems run on multiple processors or distributed computers. There are a number of reasons to distribute software across computers, for example:

However, implementing a distributed system is not easy because you have to deal with issues such as concurrency, cross-platform connectivity, and unreliable network connections.

How can you structure a distributed system so that application developers don’t have to concern themselves with the details of remote communication?

The following forces must be reconciled as you build a distributed system:

Use the Broker pattern to hide the implementation details of remote service invocation by encapsulating them into a layer other than the business component itself [Buschmann96].

Figure 5.2 shows the static structure of a simple example without any distribution. The client invokes the performFunctionA method on the server directly. This is possible only if the server objects reside on the same computer as the client objects.

Figure 5.2: Structure with no distribution

Figure 5.3 shows the static structure when distribution is implemented. 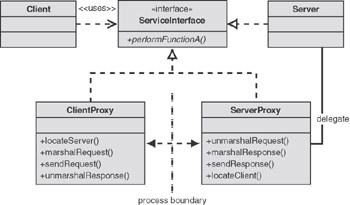 The ServiceInterface is a necessary abstraction that makes distribution possible by providing the contract about the service that the server is going to provide without exposing the implementation details on the server side. When implementing the distribution, client and server proxies would be added to handle all the “plumbing” for sending a method invocation and its parameters across the network to the server and then sending the response back to the client. The proxies would do all the marshaling and unmarshaling of data, security control, transfer channel config-uration, and any other additional work. The client would simply invoke the performFunctionA method on the client proxy as if it were a local call because the client proxy actually implements the ServerInterface. The code change to the client would be minimal and thus you could develop your whole business domain model without any knowledge about the distribution nature of the system. Any change to the way remote service invocation is implemented would be limited to within the proxy classes, and would not have any impact on the domain model. Figure 5.4 shows one scenario of the interactions between these components. 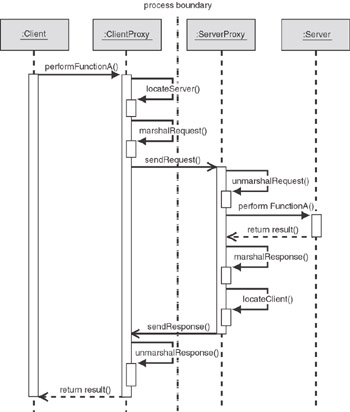 This type of function is often called a naming service. Looking up remote objects is a common requirement in enterprise computing. Therefore, a number of platforms implement a naming service, for example, Microsoft uses the Active Directory directory service. 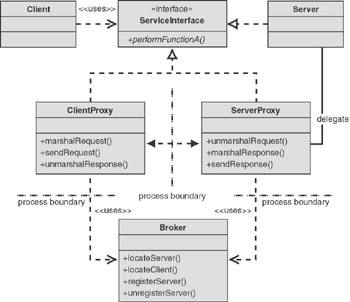 The broker is hosted at a well-known location that should not change very often. Any server that is activated and ready to receive requests would register itself with the broker so that the next time a client asks the broker for this type of server, the broker would be able to use it. This could also increase the performance and availability of the system, because it enables you to have multiple identical server components that run and serve multiple clients at the same time. This mechanism is sometimes called load balancing. Figure 5.6 shows a sample interaction scenario between these components. 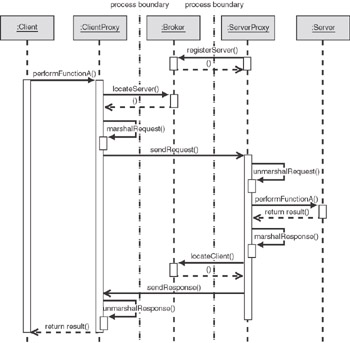 In the previous scenario, the broker is only responsible for locating the server for the client. The client obtains the location of the server from the broker and then communicates with the server directly without any involvement of the broker. In some situations, however, direct communication between client and server is not desirable. For example, for security reasons, you may want to host all the servers in your company’s private network, which is behind a firewall, and only allow access to them from the broker. In this case, you must have the broker forward all the requests and responses between the server and the client instead of having them talk to each other directly. Figure 5.7 shows a revised static structure of this model. 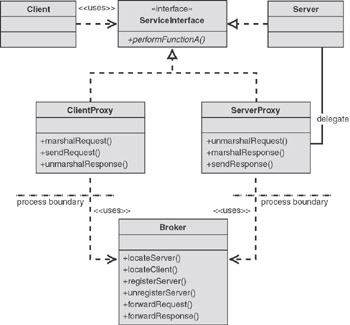 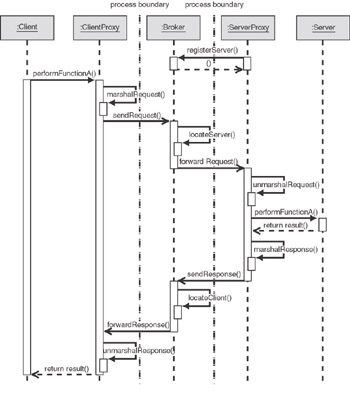 There are also situations when the client must make a series of method invocations on the same server to complete one long and complex business transaction. In these cases, the server must maintain the state between client calls. The broker must then make sure that all server calls that a client makes inside an atomic session are routed to the exact same server component.

The Broker pattern has many of the benefits and liabilities of the Layered Application pattern.

Unfortunately, layers of abstraction can harm performance. The basic rule is that the more information you have, the better you can optimize. Using a separate broker layer may hide details about how the application uses the lower layer, which may in turn prevent the lower layer from performing specific optimizations. For example, when you use TCP/IP, the routing protocol has no idea what is being routed. Therefore, it is hard to decide that a packet containing a video stream, for instance, should have routing priority over a packet containing a junk e-mail.

Server components that contain sensitive business data are often located in a company’s private network, protected behind a firewall. The broker component then sits in a perimeter network (also known as demilitarized zone, DMZ, or screened subnet), which is a small network inserted as a neutral zone between a company’s private network and the outside public network. Access to the server components is only allowed from the perimeter network and not from the outside public network. This extra layer prevents outside users from getting direct access to a server.

For more information about Broker, see the following related patterns: