Your are implementing a distributed solution using the Tiered Distribution pattern.

How many tiers should you have, and what should be in each tier? 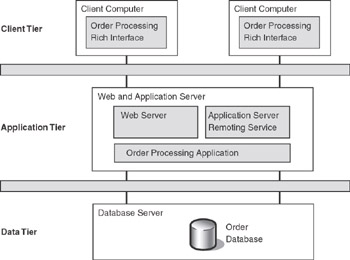 The client tier interacts with the users of the solution. If your application conforms to Three-Layered Services Application, this tier hosts the presentation layer components.

Computers in the client tier are independent of each other and should not have hard-coded references to application tier resources; instead, they should use naming services such as Domain Name System (DNS), Lightweight Directory Access Protocol (LDAP), or Universal Description, Discovery, and Integration (UDDI) to find servers and services.

The operating system and solution software on the client tier is configured and optimized for responsive user interaction and must provide the following two services at a minimum:

The network infrastructure for Web-based enterprise applications is often based on a perimeter network (also known as DMZ, demilitarized zone, and screened subnet). The client tier is, by definition, on the public side of the perimeter network.

The servers in the application tier are responsible for hosting the application’s business components and, in the case of Web applications, the Web servers as well. If your application conforms to Three-Layered Services Application, this tier hosts the business layer.

The computers in the application tier are servers, the configuration of which must balance between the conflicting resource requirements of an application server and a Web server.

Because application tier servers are Web servers, this tier often must contain multiple servers configured as a Server Farm to meet scalability and fault-tolerance operational requirements. As you add users to the client tier and the performance of the solution diminishes beyond acceptable parameters, you must add servers to the farm. For details concerning scalability and fault-tolerance characteristics of server farms, see Server Farm.

The servers in this tier usually reside within the same security context. Therefore they can interact with each other using a common security infrastructure.

If a perimeter network is used, the combined application and Web server is usually deployed in there. This has the adverse affect of increasing the exposure of sensitive business logic to the public Internet. Consider the Four-Tiered Distribution pattern if your security requirements dictate that sensitive business logic must be kept on the corporate side of the perimeter network.

The servers in the data tier host the databases that the solution requires. If your application conforms to the Three-Layered Services Application pattern, this tier hosts the data layer.

The computers in the data tier are sized and configured as enterprise servers. The servers are optimized for I/O throughput and hard-disk utilization. If the scalability and fault-tolerance operational requirements dictate that you have multiple servers in this tier, they are almost always configured as a server cluster. A server cluster is typically used in this case, because all the servers must manipulate a shared state (for example, the database), and because server-class computers have a very high limit on disk space and disk I/O capacity. For details concerning scalability and fault-tolerance characteristics of server clusters, see Server Cluster.

Data tier servers host database management systems such as Microsoft SQL Server™ 2000. Usually, reporting and data analysis software is also deployed on this tier. Database software that is specifically tuned for use in a clustered environment is required to maximize the benefit from a clustered server environment.

The Three-Tiered Distribution pattern results in a number of benefits and liabilities.

Using this pattern results in the following benefits:

The following liabilities offset the benefits of using Three-Tiered Distribution: