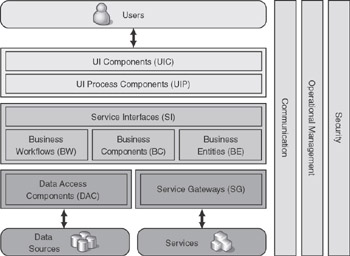 How do you determine which tier you should deploy each of your components to?

When determining which tier to deploy your components onto, you must consider the following forces within the context of your environment:

The application architects must meet with the system architects to create a deployment plan that describes which tier each of the application’s components will be deployed to. Key to the success of this meeting is that both parties are starting from a set of high-quality requirements that are precisely specified down to a testable level. For example, a requirement stated as “The application must be scalable” is not specific enough to be testable. A more testable requirement would be: “The application must support 50 concurrent users with two second response time at launch and must scale up to 500 concurrent users with three second response time.” This requirement is also phrased in a way that both system and application architects can understand. In addition starting from specific requirements, both parties must be intimately aware of the technical, legal, and business constraints that will be imposed on the solution.

Based on these requirements and constraints, the application architects define a set of components as specified in Three-Layered Services Application, and the system architects define a set of tiers as specified in Tiered Distribution. The discussion between the two parties while performing this mapping often causes significant changes to the components and tiers as each party becomes aware of the other’s perspective.

You start the meeting by mapping the component roles defined in Three-Layered Services Application to tiers, using the forces described earlier as a guide. For example, user interface components may be mapped to the Web tier, whereas business components are almost always mapped to the application tier.

The next step is to go through each component in the application and assign it to a tier. In most cases, you can assign a component to a tier by determining what role it plays in the application and then assigning it to the corresponding tier identified for that role in the previous step. However, some components inevitably have unique operational or resource requirements that will cause them to be mapped to alternative tiers. Although these special cases are expected, too many of them indicate that you may need to modify the initial mapping of roles to tiers.

The simple Web application configuration deploys all components into a single general-purpose tier. This configuration, which is shown in Figure 4.13, is the least complex and simplest configuration to understand.

The complex Web application configuration, shown in Figure 4.14, separates the presentation and domain components and deploys them to different tiers that have been specialized to address their unique requirements.

The user interface components (UIC) and user interface process components (UIP) are exposed to the Internet and can potentially interact with numerous clients. Because these presentation layer components are often exposed outside a company’s firewall, they typically have much more restrictive security requirements than do components that are not exposed. Also, many organizations mandate that servers exposed to the Internet cannot contain any sensitive data. Therefore, putting the presentation layer components into a separate tier and configuring that tier for maximum security greatly increases the overall security of the solution with minimal impact on the components that have less severe security requirements.

The meeting between the application development and system infrastructure teams is critical for successful application deployment. The resulting deployment plan provides the following benefits: