After you have made the decision to distribute your application over multiple computers, you need to consider the consequences from the following three perspectives:

How should you structure your servers and distribute functionality across them to efficiently meet the operational requirements of the solution?

The following forces act on a system within this context and must be reconciled as you consider a solution to the problem:

Structure your servers and client computers into a set of physical tiers. A tier is composed of one or more computers that share one or more of the following characteristics:

The word “layer” is often used interchangeably with tier. However, this set of patterns makes a distinction between the two. Conceptually, a tier is the hardware equivalent of a software architecture layer (See Layered Application). Whereas layers logically structure your application’s components, tiers physically structure your solution’s servers. A useful heuristic for determining the number of tiers in a solution is to count the number of computers involved in realizing a use case. Do not count computers that are only loosely associated with a use case, such as display terminals, Web proxies, caches, and file servers. The rest of this pattern refers to this heuristic as the tiering heuristic.

To provide a better understanding of just what a tier is, and the value provided by distributing your solution over multiple tiers, the following discussion works through an example of refactoring a monolithic single-tiered solution into a multi-tiered solution. The example is an order-processing application, and only considers one use case: Process Order. This use case is responsible for allowing a customer service representative to enter an order into the system.

Initially, the solution was designed for use by customer service agents and was deployed on a mainframe with the rest of the company’s mission-critical applications. Figure 4.7 shows this distribution.

According to the tiering heuristic, Figure 4.7 is a single-tiered application. One computer does all the processing. The terminal does not perform any processing in support of the use case other than to accept input and provide output to the application’s users.

Deployment and administration are very easy, because only one computer is involved.

As the number of users and the load each user puts on the system increase, more resources such as memory, processors, and disk space will be added to the system. Eventually, the expansion capabilities of the single computer will be exhausted and a second computer will be required. For mainframe-class computers, the cost associated with adding a new computer can be very high. This factor severely limits the options for scalability. At some point, adding a new user will cost you an additional mainframe and the associated infrastructure.

The terminal has no processing power of its own. All work is done on the mainframe, and the quality of the user experience is limited due to the limited user-interface functionality.

As long as all the users of the system are within the company’s intranet, the security of the solution is quite high. Most companies add additional security precautions if the mainframe is exposed to the Internet.

Several factors caused the company to switch to a two-tiered solution. First, the customer service representatives required more robust user interfaces. Second, the desire to take orders 24 hours per day affected the mainframe’s batch-processing windows. Third, performance of the order-processing system was sometimes unacceptable when the mainframe was under a high load.

As a result of these factors, the order-processing system was removed from the mainframe and was rearchitected as a two-tiered fat-client solution. The fat-client architecture puts most of the business logic on the client tier, leaving the other tier to host the solution’s database. Figure 4.8 shows this distribution.

Deployment and administration are now more complicated. The application must be distributed, installed, and configured on each client computer, and a separate installation for the server components (in this case, just the database) must be maintained.

Each user computer has it own processor and a robust graphical user interface. The order processing takes advantage of this by offering a much more interactive user interface that ultimately results in increased productivity from the customer service agents and lower error rates for the data entered.

Security is more complex in the two-tiered solution. Users typically log on to the client application. Additionally, the data tier often requires a separate authentication process. This requires the administration of two separate security systems and increases the number of potential security vulnerabilities. 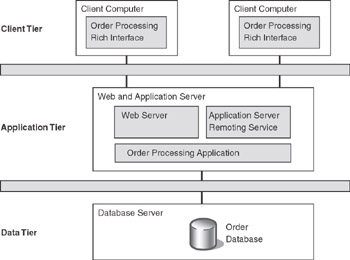 For more details about this distribution, see Three-Tiered Distribution. The following section discusses the effects of moving the example to a three-tiered distribution.

The Process Order use case now involves three computers and therefore is a three-tiered solution. The Web interface provides a basic interface to the order-processing system that allows customers to perform common operations fairly efficiently. For more complex tasks, customers must contact their customer support representative, who uses the rich interface to carry out the task. The business logic has been extracted out of the client tier and placed in its own application tier where many users can share it. This application tier invokes the services of the data tier for its data needs.

According to the tiering heuristic, it is the number of computers involved in processing a use case that determines the number of tiers, and not the number of computers per tier. For example, it is common for Web-based solutions to have multiple servers in the application tier arranged in a load balanced configuration. Because only one computer in the tier is involved with a given use-case instance, the tier adds only one computer to the tier count. Similarly, because the load balancer does not fundamentally advance the use-case processing, it does not count toward the tier count either.

Deployment and administration tasks are simpler than with two-tiered distribution, because most of the application logic is deployed on a centralized server. Therefore, clients usually do not have to be updated for application changes that do not require user interfaces changes. This is especially true for the browser-based user interfaces, which involve virtually no deployment effort. The rich interface that the customer support agents use involves somewhat more distribution effort, but the effort required is still significantly less than that involved in a fat-client installation.

Configuring and tuning the application tier is more difficult due to the need to balance the differing server resource requirements of the Web server components and business processing components.

The database tier is virtually the same as described in a two-tiered distribution.

The security concerns of three-tiered distribution are similar to those of two-tiered distribution. However, the main security issue for this example is the fact that the solution is now exposed to users who are external to the company. As a result, a firewall configuration known as a perimeter network is usually placed between the application and data tiers. The application tier is on the public side of the perimeter network, because it also hosts the Web server, and most security professionals do not grant external users access to servers on the corporate side of the perimeter network.

The company has decided to expose its order-processing application to all its customers over the Internet. Therefore, to increase security and scalability, the company has once again rearchitected its solution by separating the Web servers and applications servers into their own tiers. Figure 4.10 shows this distribution. 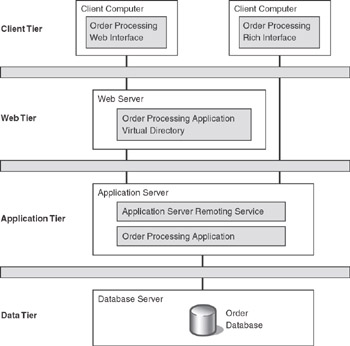 The Process Order use case now involves four computers and therefore is a four-tiered solution. The flow is the same as for three tiers, except that the Web servers have been separated into an additional tier, which adds one computer to the tier count.

The servers in the Web tier consume a different set of resources than servers in the application tier. Therefore, separating them into separate tiers allows the two different server types to optimize their resource usage. The servers on the Web tier can now be optimized for Web server use, which typically involves lots of network sockets and I/O throughput; the application tier servers can be optimized for processing business transactions, which typically involves maximizing processor utilization, threading, and database connections.

The Web tier typically addresses scalability and fault-tolerance through a Server Farm as described earlier. The application tier addresses the same concerns through the use of Server Cluster. A server cluster is a set of servers configured for high-availability that appear to clients as one super server. For more information, see Server Cluster.

The refactoring exercise in this pattern demonstrated several criteria for structuring your solution’s tiers:

This pattern results in a number of benefits and liabilities.

The resulting context of the solution described in this pattern has the following benefits:

The benefits of the solution described in this pattern are offset by the following liabilities: