A pattern describes a recurring problem that occurs in a given context and, based on a set of guiding forces, recommends a solution. The solution is usually a simple mechanism, a collaboration between two or more classes, objects, services, processes, threads, components, or nodes that work together to resolve the problem identified in the pattern.

A simple solution to this problem is to create a QuoteManager class with a private constructor so that no other class can instantiate it. This class contains a static instance of QuoteManager that is returned with a static method named GetInstance(). The code looks something like this:

It is likely that you have solved problems like this in a similar manner, as many other developers have. In fact, pattern writers on the lookout for recurring problems and solutions have observed this kind of implementation frequently, distilled the common solution, and documented the problem-solution pair as the Singleton pattern [Gamma95].

Notice that the Singleton pattern does not mention a Quote or QuoteManager class. Instead, the pattern looks something like the following abbreviated example.

Comparing the abbreviated pattern example in Figure 1.1 with the QuoteManager source code illustrates the difference between the pattern, which is a generalized problem-solution pair, and the application of the pattern, which is a very specific solution to a very specific problem. The solution, at a pattern level, is a simple, yet elegant, collaboration between several classes. The general collaboration in the pattern applies specifically to the QuoteManager class, which provides the mechanism that controls instantiations in the quote application. Clearly, you can apply the same pattern to countless applications by modifying the pattern slightly to suit specific local requirements. 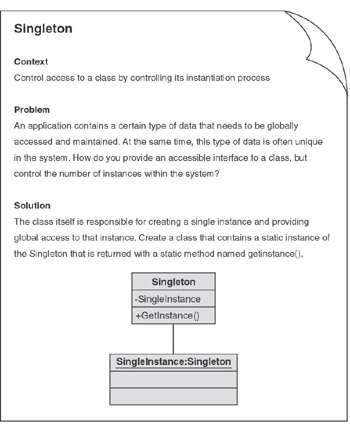 Written patterns provide an effective way to document simple and proven mechanisms. Patterns are written in a specific format, which is useful as a container for complex ideas. These patterns exist in the minds of developers, and their code, long before they are documented and given pattern names. At some point, pattern writers discover these patterns from actual implementations and generalize them so they can be applied to other applications.

Although pattern writers usually provide implementation code examples within these generalized patterns, it is important to understand that there are many other correct ways to implement these patterns. The key here is to understand the guidance within the pattern and then customize it to your particular situation. For example, if you are familiar with the Singleton pattern, you probably noticed that the code example is based on the [Gamma95] implementation. This implementation is used here because it is the most popular example and requires the least explanation for the purposes of this introduction to patterns. However, an implementation of Singleton optimized for the C# language would look quite different, and while these two implementations differ significantly, both would be correct.

Patterns exist at many different levels of abstraction. Consider another example, this time at a higher level of abstraction than the level of source code:

You are designing a Web-based quote application containing a great deal of business and presentation logic, which, in turn, depends on numerous platform software components to provide a suitable execution environment. How do you organize your system at a high level to be flexible, loosely coupled, and yet highly cohesive?

One solution to this problem involves organizing your system into a series of layers, with each layer containing elements at roughly the same level of abstraction. You then identify the dependencies in each layer and decide on either a strict or a relaxed layering strategy. Next, you decide if you are going to create a custom layering scheme or adopt a layering scheme previously documented by others. In this case, let’s say you decide to use a well-known layering strategy: one layer each for presentation, business logic, and data access. Figure 1.2 shows how your layering scheme might look. 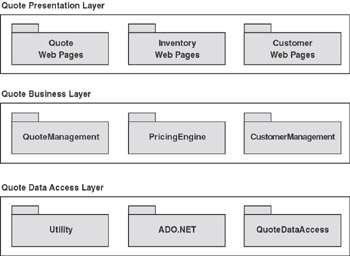 If you always design systems this way, then you employ this pattern already, independent of any generalized pattern. Even so, there are many reasons why you might want to understand the patterns that underpin this design approach. You may be curious about why systems frequently are built this way, or you may be looking for more optimal approaches to problems that this pattern does not quite resolve. In either case, it is worth examining the patterns and mechanisms at work here.

Using layers as a high-level organizing approach is a well-established pattern described in the Layers pattern [Buschmann96]. Figure 1.3 shows an abbreviated version of this pattern. 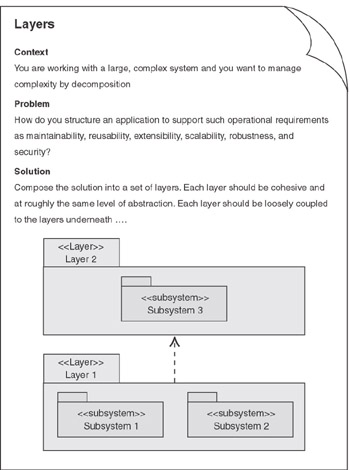 This simple strategy for organizing applications helps to solve two challenges in software development: the management of dependencies and the need for exchangeable components. Building applications without a well-considered strategy for dependency management leads to brittle and fragile components, which are difficult and expensive to maintain, extend, and substitute.

The mechanisms at work inside the Layers pattern are more subtle than those of the Singleton. For Layers, the first collaboration is at design time between classes, because the layered organization localizes the effects of source code changes and prevents the changes from rippling throughout the entire system. The second collaboration is at runtime, when relatively independent components within a layer become exchangeable with other components, again isolating the rest of the system from impact.

Although the Layers pattern is general enough to apply to areas such as network protocols, platform software, and virtual machines, it does not resolve certain specific forces that are present in enterprise-class business solutions. For example, in addition to managing complexity by decomposition (the essential problem solved by Layers), business solution developers also need to organize for effective reuse of business logic and conserve valuable connections to expensive resources such as databases. One way to solve this problem is by using the Three-Layered Application pattern. Figure 1.4 on the next page shows the abbreviated description of this pattern. 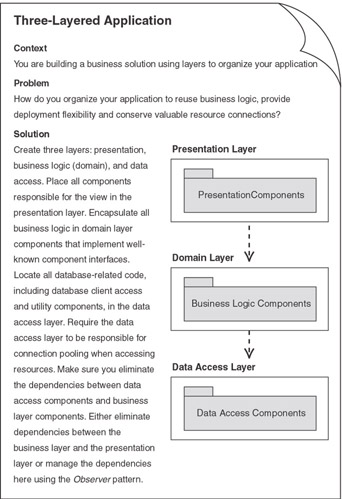 You built a quote application for a successful enterprise that is rapidly expanding. Now you want to extend the application by exposing your quote engine to business partners and integrating additional partner services (such as shipping) into the quote application. How do you structure your business application to provide and consume services?

One solution to this problem is to extend Three-Layered Application by adding additional service-related responsibilities to each layer. The business layer adds the responsibility for providing a simplified set of operations to client applications through Service Interfaces. The responsibilities of the data access layer broaden beyond database and host integration to include communication with other service providers. This additional functionality in the data access layer is encapsulated in Service Gateway components, which are responsible for connecting to services (both synchronously and asynchronously), managing basic conversational state with the service, and notifying business process components of significant service- related events.

The Three-Layered Services Application (Figure 1.5, on the next page) captures this problem-solution pair. 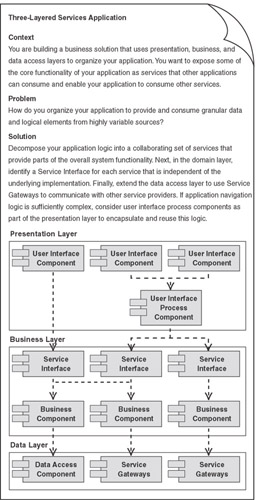 Applying the Three-Layered Services Application pattern to the quote application example results in the following model. 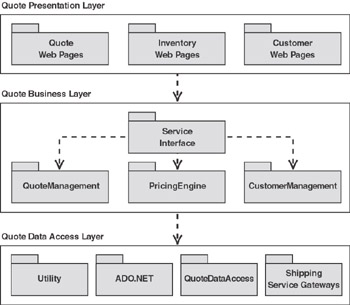 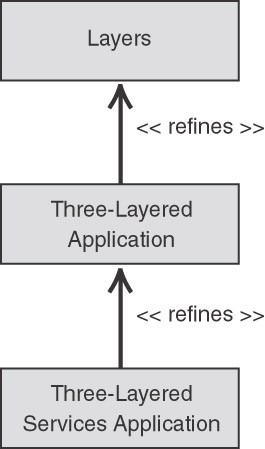 Adding additional types of components to specific layers is not the only way to manage this growing complexity. As complexity warrants, designers often create additional layers within the application to handle this responsibility. For example, some designers move Service Interfaces into a separate layer. Other designers separate the business layer into a domain layer and an application layer. In any case, you sometimes see these three layers expanded to four, five, or even six layers as designers use this pattern in response to complex requirements. Conversely, the Layers pattern was also used in the relatively simpler days of client-server applications, when two-layered applications were the standard.

When grouped together, these Layers variations form a cluster of patterns (see Figure 1.8) that visually represents common approaches to application layering. Clustering, used in this context, simply means a logical grouping of some set of similar patterns. This notion of a cluster is quite useful for expanding the view of patterns to encompass an entire solution, and for identifying clusters of patterns that address similar concerns in the solution space. Chapter 2, “Organizing Patterns,” discusses clusters in more detail. 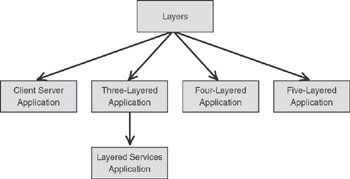 Figure 1.8: A cluster of patterns