For workflow capabilities, the Microsoft Office system depends on Windows Workflow Foundation, which officially is a part of the Microsoft .NET Framework 3.0 (previously known as WinFX). This also means that the new workflow features in Office SharePoint Server 2007 are possible because of this new technology that facilitates the creation of workflows.

SharePoint Designer 2007 is the most important tool when it comes to creating SharePoint workflows, as it makes creating workflows-whether they be simple, average, or complex-an appealing job. The Microsoft Office system client applications, such as Word 2007, start workflows by calling into the SharePoint Web services application programming interface (API).

A workflow is executed on a SharePoint server, which in turn uses Windows Workflow Foundation as the foundation of the execution of a workflow process. SharePoint Server 2007 includes support for workflows in lists, libraries, and content types, and it provides queuing and management of lists and libraries to provide the necessary data to the Workflow Foundation runtime as demanded by the workflow's configuration.

SharePoint Server 2007 runs the workflow until it reaches a point at which it cannot proceed until a specific event occurs or the workflow ends. This leads to the persistence of such an activity to the database in a single SQL transaction. After that, the activity is discarded from memory. For example, a workflow process might halt until a document is approved.

If a workflow is not currently processing any activities, it can get into an idle state, which leads to the hydration of a workflow. As a result, the workflow is discarded from memory and persisted to a database. If a new event occurs that is targeted toward a hydrated workflow, the event handler extracts the workflow ID from the event and passes it into the SharePoint Server 2007 queue manager, which ensures that the correct workflow is started. In other words, SharePoint dehydrates the workflow as needed.

The context of workflow events is persisted to tables in the database. The two SQL Server database tables that are most important when it comes to storing information concerning workflows are Content DB. Workflow and ContentDB.WorkflowAssociation.

Once workflow event information is stored in the database, it sits there waiting for an active thread of the SharePoint queue manager that is able to pick up the information and process it. Because of this, it is possible to start a workflow on a given Web front-end and continue to work on the workflow on another Web front-end.

Workflow items are always processed by hydrated workflows. The decision to hydrate or dehydrate a workflow is made by SharePoint. Currently, it is not possible to influence this decision process and influence settings regarding queueing, load balancing, and time-based execution.

Workflows designed with SharePoint Designer 2007 do not contain custom code and are not compiled and deployed as assemblies are. Rather, they are stored in the form of source files within Windows SharePoint Services and compiled into memory only when needed. For each SharePoint site, workflows of this type are stored in a separate document library. This document library contains a folder for each workflow designed in SharePoint Designer 2007. The folder contains all the source files necessary for the workflow, including the following ones:

As you can see in Figure 28-1, SharePoint Designer 2007 shows you all source files that are part of a workflow in the Folder List task pane. 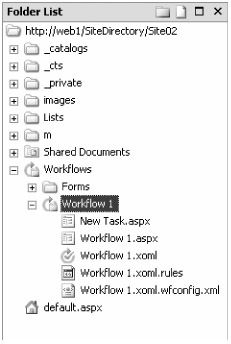 Figure 28-1: Source files of a workflow

Workflows are expressed in .xoml files containing workflow markup language. The .xoml file extension, shown in Figure 28-1, stands for eXtensible Object Markup Language (XOML) and is a serialization format for the Windows Workflow Foundation workflow objects. The schema for .xoml files is identical to the schema that is used for .xaml (eXtensible Application Markup Language) files. The only difference lies in the names of the file extensions.

In principle, .xoml files can be created using any text or XML editor you choose, as long as such files adhere to the XOML schema. Nevertheless, it is advisable to use either SharePoint Designer 2007 or Visual Studio 2005 Designer because those products have built-in support for creating workflows.

How to Implement a Workflow

What choices do you have when it comes to implementing workflows? In SharePoint Portal Server 2003, sophisticated workflows were often implemented using third-party products. With the advent of strong support for workflow technology in SharePoint Server 2007, those third-party vendors will probably become less important in the near future. If you want to, you can also create your own workflows using the SharePoint event model.

For Windows and ASP.NET applications, developers can use the User Interface Process Application Block (UIPAB), which can be downloaded for free from http://www.microsoft.com/downloads/details.aspx?familyid=&displaylang=en on the Microsoft Web site as a component that can be used in developing workflows.

BizTalk Server 2006 includes Human Workflow Services (HWS), a technology intended to aid in creating human-oriented workflows, although Human Workflow Services is now considered to be deprecated technology. BizTalk Server includes a Windows SharePoint Services adapter that is able to communicate with SharePoint lists and libraries and can be used to build workflows, although this requires a considerable amount of work.