When Will SPIT be a Problem?

SPIT is not a problem right now because, while there is a fair amount of VoIP deployed and the amount is certainly growing, most of it is present in disconnected internal VoIP deployments. While enterprises have a fair amount of VoIP, it is very uncommon to connect these deployments to others. Circuit-switched access and the PSTN continue to be the primary interconnect between enterprises . For the reasons discussed in the previous section, the PSTN doesn't allow for cost-effective transmission of SPIT.

Over time, more and more enterprises will interconnect themselves via VoIP, most likely through SIP trunks to service providers and/or the Internet. More and more calls will be VoIP end-to-end. More and more users (and attackers ) will have access to VoIP and the cost of making calls will decrease, perhaps to the point where VoIP calls are allbut-free, just like email messages. During this transition, unless the VoIP community takes steps to address it, expect SPIT to grow and grow as an issue.

We developed a SPIT-generation tool called spitter that uses the open -source Asterisk IP PBX as the SPIT-generation platform. There are other tools that could be used for this function, but we found Asterisk to be both easy and flexible to use. The spitter tool is run on the same platform as Asterisk, reads an ASCII file containing information about the calls to be created, and produces separate "call files" that it temporarily places in the /tmp directory, and then moves into Asterisk's outgoing spool folder, /var/spool/asterisk/outgoing/ . Asterisk monitors this directory for files and creates calls almost immediately after the call file is created. The file input to the spitter tool must contain at least one call record, but the upper limit is only a function of the capacity of your storage media. The name of the file really does not matter, but it is good form to provide a meaningful name and append a .call extension. Each file created by the spitter tool has a name of this form:

We set up a second Asterisk IP PBX using IP address 10.1.101.2 to be the SPIT-generation platform and installed the spitter tool on that platform. The primary Asterisk IP PBX remained, using the IP address of 10.1.101.1 and serving four target IP phones. Voicemail was set up on this platform. Figure 14-2 illustrates the configuration we used for our tests. 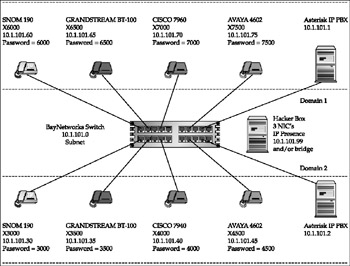 The first step in using the spitter tool is to understand how Asterisk uses the call files to create calls. Each call file contains several attributes that define the call. There are more attributes available than are needed to generate SPITwe just describe the ones you need.

Next, set the caller ID of the outgoing call:

Next, if the call is answered , specify where to connect it. The Context field refers to an entry in the Asterisk dialplan.

Finally, set channel variables , which are used to specify the audio file to be played :

The order of the records isn't relevant, because Asterisk will simultaneously schedule a call for each file. The files target different extensions, but could also target one extension with multiple calls. This example uses a single SPIT message, but it could be different for each call. Each call record could have specified a different sound file in its channel variable assignment:

In our scenario, each call record requires that its targets be dialed over an IAX channel named:

Here, you see the address of the Asterisk IP PBX in the destination domain (in other words, 10.1.101.1). However, the name of the channel and the destination host could have been assigned symbolic names , and Asterisk would have attempted a DNS operation to resolve the host's name into an IP address. The type, peer, means this channel is used to make outbound calls. For an explanation of the other attributes, refer to Asterisk: The Future of Telephony by Jim Van Meggelen, Jared Smith, and Leif Madsen (O'Reilly 2005).

Control starts at the step stipulated by the value of the call file's Priority attribute (in other words, step 1). The context name is not required to be meaningful, but it is usually good form. The dialplan context needs to be defined before the spitter tool is executed. The dialplan is contained within Asterisk's extensions.conf configuration file. Here is that context definition:

We have a dialplan script that executes in sequential steps beginning with step (in other words, Priority ) 1. The priority of each step (the second parameter in each extension line) defines the order of execution when the dialed extension (from the call file) matches the extension pattern defined in the first parameter of each extension line. In this instance, each extension match pattern is identical within the context. For a match to exist, the extension dialed must be exactly four digits in length beginning with a 6 or a 7. The pattern defines a range of phone extensions from 6000 through 7999. When matched, the script begins with the step whose priority is equal to 1.

If there happened to be multiple files named spam in the sounds folder (for example, spam.gsm , spam.wav ), Asterisk selects the file whose codec poses the smallest computational burden automatically. The GSM codec is the preferred Asterisk codec. All of the sound files supplied with Asterisk are .gsm files.

Is a two-second wait sufficient? If voicemail answers, two seconds is probably insufficient for the voicemail to annunciate its greeting and obligatory beep. We'd expect the beginning of the spam audio to be lost. There are Asterisk dialplan applications (for example, WaitForSilence() and BackgroundDetect() ) and strategies for using them that can be applied to attempt to discriminate between a typically short human greeting (Hello?) and the typically longer voicemail greetingalthough human greetings might also be lengthy (for example, business receptionists and service/call centers). Note that you can also "work around" this by building a short delay into the audio file that you specify.

The final step in the dialplan script instructs the Asterisk IP PBX to hang up the call after the sound file is played (in other words, unless the destination disconnects earlier). The spam audio provided in the Asterisk sounds add-on distribution actually requests the callee to press keypad buttons if they're interested in a particular aspect of the message. The dialplan context could have been written to accept keypad button presses and route the call appropriately.

There are several options to the spitter tool invocation. One allows the tool to operate in a test mode that doesn't require an Asterisk installation. One permits the output of the tool (dropping call files into Asterisk's outgoing folder) to be throttled (limited). Here is the actual command-line usage:

To the spitter tool, each call record is simply a series of nonblank lines. Records are separated by a line beginning with the new line character (in other words, \n = 0x0a ). The spitter tool simply creates a separate file for each record, but it does not parse the lines in a record to confirm it is complete or makes sense.

Here is the invocation of spitter using the test call file provided previously in test mode:

The spitter tool stalls when 50 percent complete. Based on the number of call records the tool reported were found in the input file (4), this means the spitter tool was only able to process the first two call records from the input file before the number of call files in the outgoing folder reached the limit. The spitter tool then reported a stall warning every minute. After the third warning, we manually deleted two spitter call files from our personal outgoing folder and the tool quickly completed processing the remaining two call records.

Finally, here is the nontest mode, unlimited execution of spitter :

Attack Other Tools to Produce SPIT

We found what is reportedly a nice free application that could be abused to produce SPIT: TeleYapper. This tool works in conjunction with trixbox (used to be called Asterisk@Home edition).

It is integrated with a SQL database where call groups can be defined and audio messages can be stored. It recognizes when a call is not answered and can reschedule the call for later attempts. It has many other nice features. At the time of this writing, you could find information about TeleYapper at the following website, but you should also be able to Google TeleYapper for the latest information: http://nerdvittles.com/index.php?p=95.