This section looks at the classes that form the foundations for performing basic drawing. You should be familiar with the application framework, as shown in Chapter 4, and also with the use of controls, as shown in Chapter 5, since most of the examples will perform drawing within a CCoeControl -derived class. This hides away most of the complexities of explicitly having to create a Window Server client, and it provides a window to draw to.

You can create your own base for drawing without CCoeControl , but this is more complex and is unnecessary for illustrating the basic concepts. The function calls for drawing shapes , bitmaps and fonts are exactly the same, whether or not a CCoeControl is used, as drawing always takes place to a window using a graphics context.

The following code snippets are taken from the BasicDrawing application's Draw() function, and this simply draws some horizontal lines on the screen with differing colors and widths, as shown in Figure 11-2. 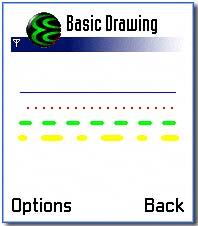 Initially a handle on the system graphics context is obtained. A graphics context performs various drawing functions, and later in the function it will be used to draw lines between two points on the screen using the DrawLine() method:


The TPoint class is used to represent coordinate points on the screen, while TSize represents a graphical object's width and height:


In order to make the drawn lines visible, the graphics context's pen is set to an appropriate color . The trgb class represents color, and colors are defined using the AKN_LAF_COLOR() macro (see the subsection Color and Display Modes later in this chapter).


The function continues with similar operations being performed. In the first block the pen color is changed from blue to red, and the pen style is updated. You can also see that the pen size is altered using the TSize object, penSize . TSize is a generic class embodying size and is used in conjunction with various objects that are drawn to the screen, such as shapes, bitmaps and fonts.

TPoint and TSize have their mathematical operators overloaded; this allows a developer to quickly apply transformations, such as increasing the pen size and incrementing the point coordinates:


This Draw() function covers many of the fundamental concepts that form the basis for drawing in a Series 60 application ”in particular, screen geometry, graphics devices and contexts, color and pens.

The coordinate system of the screen of a Series 60 device has the standard origin ( 0, 0 ) at the top left-hand corner of the screen. Moving rightward and downward from the origin increases the x and y coordinates, respectively. Measurements are in pixels, and the minimum Series 60 screen size is 176 by 208 pixels. Graphics tend to be drawn in a rectangular fashion, regardless of their true shape, and the geometry classes available reinforce this. The classes of note are TPoint , TSize and TRect . Their members are public for ease of use.

Throughout the examples in this chapter TPoint , TSize and trect will be employed extensively. They are essential for drawing graphics to the screen with the desired positions and size. Figure 11-3 shows the relation between these classes. 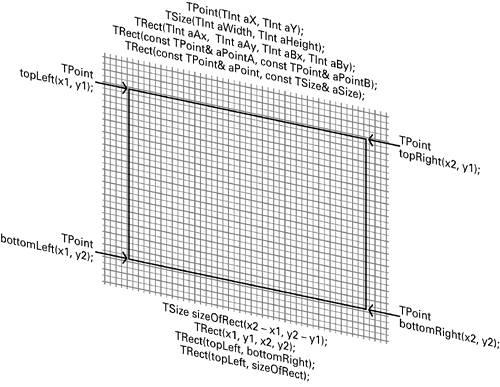 A graphics device represents what is being drawn to ”for example, the screen, a bitmap in memory, or even a printer. Attributes of graphics devices include the size of the device area and the number of colors supported by that device.

CGraphicsDevice provides functions for obtaining a device's current display mode, its size and the number of font typefaces associated with it.

CBitmapDevice allows you to obtain information about particular pixels and device scan-lines. CWsScreenDevice and CFbsBitmapDevice are concrete graphics device implementations representing the device screen via the Window Server and an in-memory bitmap, respectively. Their associated graphics contexts are CWindowGc and CFbsBitGc . By drawing inside a CCoeControl class, the BasicDrawing example does not require an explicit reference to a particular graphics device.

Figure 11-4 shows some of the various types of graphics devices and how they are architecturally related .

Figure 11-4. Inheritance relationship of a selection of graphics device types.

Table 11-3 provides an overview of the classes shown in Figure 11-4.

Graphics contexts are used to perform the physical drawing to a graphics device. Consequently, they contain numerous functions for drawing shapes, text and bitmaps. As it would be cumbersome to have to provide attributes ”for example, the color of a shape or the font of some text ”every time a drawing function is called, they are contained within settings variables of the graphics context. This is illustrated in the BasicDrawing example, where the pen color and style are set before a line is drawn, and any subsequent drawing operations will use these properties unless they are explicitly changed:


The variety of graphics context functions and types will become evident as the chapter unfolds and the example applications illustrate bitmap, text, shape and animation drawing.

Colors are represented by the trgb class, which is a 32-bit value employing 8 bits each for Red, Green and Blue, with 8 bits spare. As Series 60 is highly customizable for different licensees , the color scheme of the user interface can be changed. In order to ensure consistency between colors and the palette in use, it is necessary to employ the AKN_LAF_COLOR() macro to define colors. This can be found in the aknutils.h header file, which should be included by your application code.

Table 11-4 lists some common integer values and the corresponding color they will produce when passed into the AKN_LAF_COLOR() macro. (A full list of values can be found in the Series 60 Style Guide, in the SDK documentation.)

An example of how to use the AKN_LAF_COLOR macro is shown here:

The range of colors available for use is subject to two key factors: the number of colors the device can physically display, and the current display mode. Display modes are the color depths available and are represented by the tdisplayMode enumeration.


Obviously the number of colors in a display mode cannot exceed the amount a device is physically able to display. Series 60 devices support a minimum 12-bit display of 4096 colors expressed by the EColor4K display mode. This uses 4 bits for Red, Green and Blue with 4 bits spare to make 16-bits (2 bytes) for ease of use ”it is faster to move bytes than to perform bit operations. Some current Series 60 devices support a 16-bit display, expressed by EColor64K .

Devices have a "preferred display mode" to which graphics will be converted for display. As time will be spent performing any conversion, there can be a performance bottleneck if your graphics are not in the "preferred display mode." For static graphics this is not so much of a problem, but for animations and games you may need to take account of this fact ”multiple versions of bitmaps can be created, with only the applicable ones installed, or loaded at runtime.

Pens provide attributes of the outline, and brushes attributes of the filled regions , of drawable items, such as shapes. Both have color and style properties, the styles being represented by the TPenStyle and TBrushStyle enumerations, respectively. An example of a pen style would be EDashedPen that will draw a dashed outline, while EVerticalHatchBrush will fill a region with a vertical line pattern. For a full listing of the styles available look in the \epoc32\include\gdi.h header file in the root directory of your SDK.

The View from a Window and the Relationship with CCoeControl

From the BasicDrawing application it would appear that there are no references to windows , yet drawing takes place in a window. How can this be? By employing the application framework, and in particular using a class derived from CCoeControl , the window-related aspects of drawing are hidden.

Indeed, every CCoeControl has an association to a window, either by owning it or by lodging in the window of another control. CCoeControl has two functions with respect to this, CreateWindowL() and SetContainerWindowL() , one of which should always be called at construction time. It is possible to gain a handle on a CCoeControl 's window by calling its Window() function.

The Window Server will redraw areas of a window, should they be marked as invalid. This can occur because all, or part, of a control has been temporarily overlapped by another, and the overlapping control has been dismissed. The region of the window that was hidden by the overlapping control will now be marked as invalid, and the control will have to redraw that area of the window that it occupies.


Another advantage of employing a CCoeControl to handle drawing is that a variety of useful functions are provided "for free" that enable you to perform a wide variety of tasks ” ranging from querying screen devices to employing resource files for handling localized descriptor strings. The control environment member variable of CCoeControl , iCoeEnv , is particularly valuable in this respect. Table 11-5 lists some of the functions this provides. For a list of all of the functions available, look in the file \epoc32\include\coemain.h in the root directory of your SDK, or in the SDK documentation for CCoeEnv .


Drawing without the application framework is possible, but it would be much more complex, as you would have to write your own Window Server client to provide the functionality offered by CCoeControl . One advantage would be less overhead when communicating with the Window Server, but a full illustration is beyond the scope of this chapter. However, examples are provided by the SDK. (In Series 60 2.x they can be found in the directory \Examples\graphics\ws in the root directory of your SDK ”in earlier versions of the SDK they reside in \ Epoc32Ex\graphics\ws . ) As touched upon earlier, drawing will still take place via a graphics context, so all of the drawing concepts covered here are still valid.