In Linux and UNIX systems, mount points are the locations where physical hard drives are attached. The entire directory tree structure spans one or more mount points, depending on the size of the devices used in on the system. A directory or sub-directory may not span multiple mount points.

Proper planning of directory layouts through mount points allows you to take advantage of better performing hardware and filesystems.

VM allows you to share DASD across guest virtual machines (typically in read-only mode). A VM DASD volume often equates to a filesystem. Table 4-1 lists some directories you might want to share among your various Linux guest machines.

The advantage of sharing the Domino binaries is that you can update all your Domino servers on each Linux (under the same VM) in one single step. Keep in mind that we are sharing at the minidisk level. Directories that span multiple minidisks grouped into logical volumes are not candidates for sharing.

The purpose of a VM system is to make available to users of VM a virtual computer which appears to users as if they have full, exclusive use of all the resources of the machine. The resources that a user has access to are defined in the directory entry for the user.

One of the resources that can be configured is DASD. Although there are a large range of 3390 DASD types, the most common is the 3390 Model 3 DASD pack, which has about 2.3 GB of space. Less common but also frequently used is the 3390 Model 9 DASD, with 6.9 gigabytes of formatted space. A user may not need all of this space but only a portion of it.

VM employs the concept of minidisks, whereby physical DASD can be split into smaller sizes, or minidisks, and assigned to individual VM user IDs or guest systems. Minidisks can be as small as one cylinder or as large as all the cylinders on a DASD device. One important thing to keep in mind is that the size of a minidisk cannot exceed the number of cylinders on a disk. Cylinder 0 is used exclusively by the operating system. Minidisks cannot span physical DASD devices.

A minidisk is a contiguous portion of a physical DASD, similar to a partition in the Windows world that is defined for exclusive use by a specific owner user ID. When the minidisk is defined, it is given an address in the same way that a DASD pack is defined with an address. To users, it appears as though they have access to a physical disk of a specific size. What users do with this disk is based on what their needs are. To users, this is just another DASD device over which they have full control. 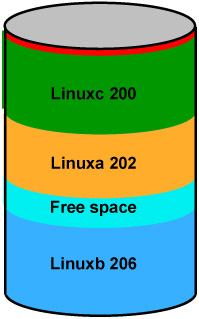 Figure 4-1: Multiple minidisks on one DASD

When we are running Linux under VM, we are in essence running Linux natively on a virtual mainframe with virtual resources such as DASD, memory, and CPUs. From the perspective of Linux, it appears as these resources are real.

With regard to minidisks, Linux views them as though they are hard drives that can be addressed natively. When we install and configure Linux, the drives are formatted and controlled as they would be on any other Linux system, complete with boot blocks and so on.

The most common DASD type for a IBM mainframe is the 3390. Actual 3390 DASD has not been manufactured for many years. It may be possible that this type of DASD is still in use, but it is far more likely that the DASD in use today is emulating a 3390. 3390 DASD is commonly emulated by hardware such as RVA and ESS.

When looking at the model number for a 3390 device, the number is roughly equivalent to the amount of data in gigabytes that the device can store. 3390 mod 3 (2.3 GB) and mod 9 (6.9 GB) are most commonly used on z/OS. When running Linux on z/VM, other sizes can be used. A new, larger model of DASD can be emulated, although no physical hardware of this type was ever made; this is the 3390-27 or mod-27 device.

The models listed in Table 4-2 can be emulated and used by Linux.

In this guide we take the approach of dedicating whole DASD volumes for Linux systems. However, these devices are split up into minidisks owned by individual Linux guests. If your DASD has been "gen'd shared" in your IOCDS (that is, it is visible to multiple logical partitions (LPARs) on your machine), then to be on the safe side we recommend initializing and labelling all the Linux DASD with a volume serial that makes it obvious that these are Linux disks. That way, if one or more of the disks are inadvertently varied online to another LPAR on the machine, it should be obvious that the disk belongs to the Linux environment.

A further tip would be to spread the minidisks of each Linux guest across physical volumes. This increases the I/O bandwidth available to each guest. It also avoids the situation where a process is blocked from reading in data so Linux tries to swap in another process, only to find that blocked because the swap file is on that same physical device. Having all minidisks the same size makes it easy to spread them over multiple physical volumes.

Virtual disks are disks emulated by VM in memory. The z/VM operating system automatically manages the virtual disks. Typically they are defined in the guest user's directory entry by address, along with the memory to allocate for them.

It is very important to remember that the contents of a virtual disk will not be available after a logoff from the virtual machine, or after a shutdown and IPL of the z/VM system. The typical usage of virtual disks for Linux will be as swap disk. Domino can also make use of virtual disks, for example as a place to temporarily store the data for rebuilding the database indices while running the Update task.