During our project, we experimented with various types of disk and channel configurations, as well as with different formatting methods. In the following sections, we discuss our findings.

We can use Linux commands to display our system status. The example in Figure 12-4 on page 303 shows that the LVM is not striped and that the disk initially fills up from the first Physical Volume in the Volume group to the rear.

The example in Figure 12-5 shows the same disk, which has just been striped

Figure 12-5: lvdisplay on a striped LVM

In Figure 12-7 on page 305, the first group of disks are RVA disks that are a part of non-striped partition on LinuxC, with a mount point of mail1. The partition is actually made up of seven volumes; however, only the first three were used. This means that only three out of the seven volumes were used. The others were inactive, as there was no data placed on them.

This reduces the number of volumes to write to and causes delays due to disk contention. The RVA disks are using four CHPIDs and are also using ESCON. The ESACHAN report in Figure 12-6 shows that the first four CHPIDs are being used at about 45% utilization, where the ESS is using two CHPIDs with FICON and the utilization is about 18%

The second and third group of disks are RVA disks that have been striped. All disks are being used about the same amount. As in the first case, the response times are higher-up the overall throughput is spread among all disks.

The fourth group of disks are on the ESS, but are non-striped. This shows that the response, pending, and connection times have been changed dramatically with using ESS and FICON, as compared to the first group of disks.

The fifth group of disk is interesting in that there are two RVA disks as a part of the stripe of seven in the disk partition. The overall response, pending, and connection times have been reduced, as well as the remainder of the stripe having very good times.

The sixth group of disks is a complete set of ESS disks which are all a part of a one-disk partition with seven disks. The best times seen for the performance tests were from this DASD.

In the ESACHAN (channel performance analysis) in Figure 12-6, the ESCON channels in use by the RVA are at 44% to 45% utilized. With the FICON channels, which are significantly faster than ESCON channels, there is new measurement technology. This report shows the overall calculated utilization and the activity across the channel in each of several categories. 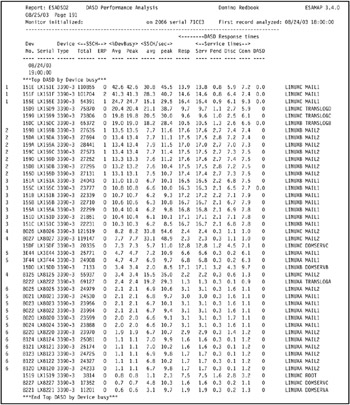 This data shows several different aspects of performance that you should evaluate when working to improve your DASD performance. DASD response time has four components (for this discussion): queue time, disconnect time, pend time, and connect time. Because of the different technologies used for this DASD, this report demonstrates most of the possible performance benefits that can be obtained. Note that the RVA response time is in the 16 ms range, and the ESS is in the 2 ms range.

Disconnect time has more to do with the caching function in the storage controller, given equivalent DASD workloads. The ESS shows consistently improved disconnect times, though it was not quite as static as the connect time.

Pend time is the time to start the I/O. Given that the ESCON had four channels to the RVA, this could have been expected to be quite good, as compared to just the two channels to the ESS. But the pend time dropped from 1 to 2 ms down to .3 ms. This could be because ESCON is slower than FICON, so each I/O kept the channel busy for a longer period of time (as seen in connect time), and therefore chance of having a busy channel (and needing to wait) increased.

With the additional software options using LVM, you should now be able to understand what technology would apply to fit your DASD I/O needs.