The process for analyzing performance data for the processor should start at a high level. In Figure 12-1 on page 300 you see a simple "SMART" screen (provided by ESAMON) showing the top users and defined servers. The three Linux servers running Domino have similar profiles in terms of CPU and I/O requirements. 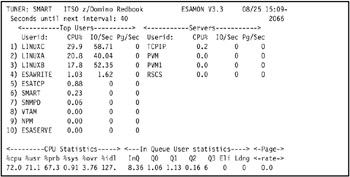 Note that this system has sufficient storage, so none of the servers are paging. In this case, the three Linux servers are using almost 70% out of one of the two processors on this system. The per cent utilization for a two-processor system is shown up to 200 %, to ensure capacity requirements are always comparable across systems 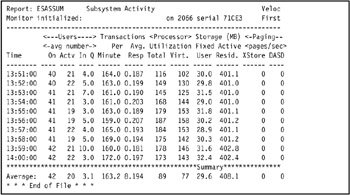 From this display, some general assumptions can be made. Overall, there is CPU left over—the processor is not constrained, since it never approaches 200%. From the paging to expanded storage and paging to DASD, it is obvious that this system has no issues with paging and no further effort in analyzing the paging subsystem is required.

In a Linux server environment, there is not much value in measuring the transaction values provided by z/VM. These are not a measure of work performed inside Linux, but a measure of the whole virtual machine. The storage measure is important in understanding the overall requirements. In this case, there is about 30 MB of overhead to support the users, identified as fixed user storage, and there is about 400 MB of virtual machine storage resident. As this system has 2 GB of real memory, there are no storage constraints.

The next step in analyzing performance of a Linux server, now that the basic subsystems have been evaluated, is to measure inside the Linux server. In this example, there is one process that is likely looping. Processes using such large amounts of processor resource should be identified and a determination should be made if it is appropriate or not.

This report also shows the storage requirement of each process. In Linux, there is no distinction between threads and processes and though storage is shared between threads, the reporting of the storage will contain large overlaps.

In Figure 12-3 on page 302, all the processes identified as server are sharing storage. 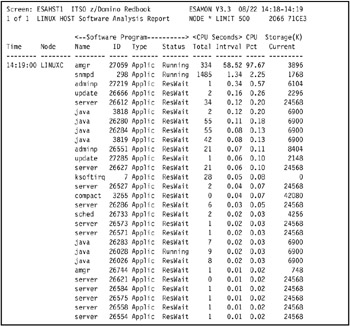